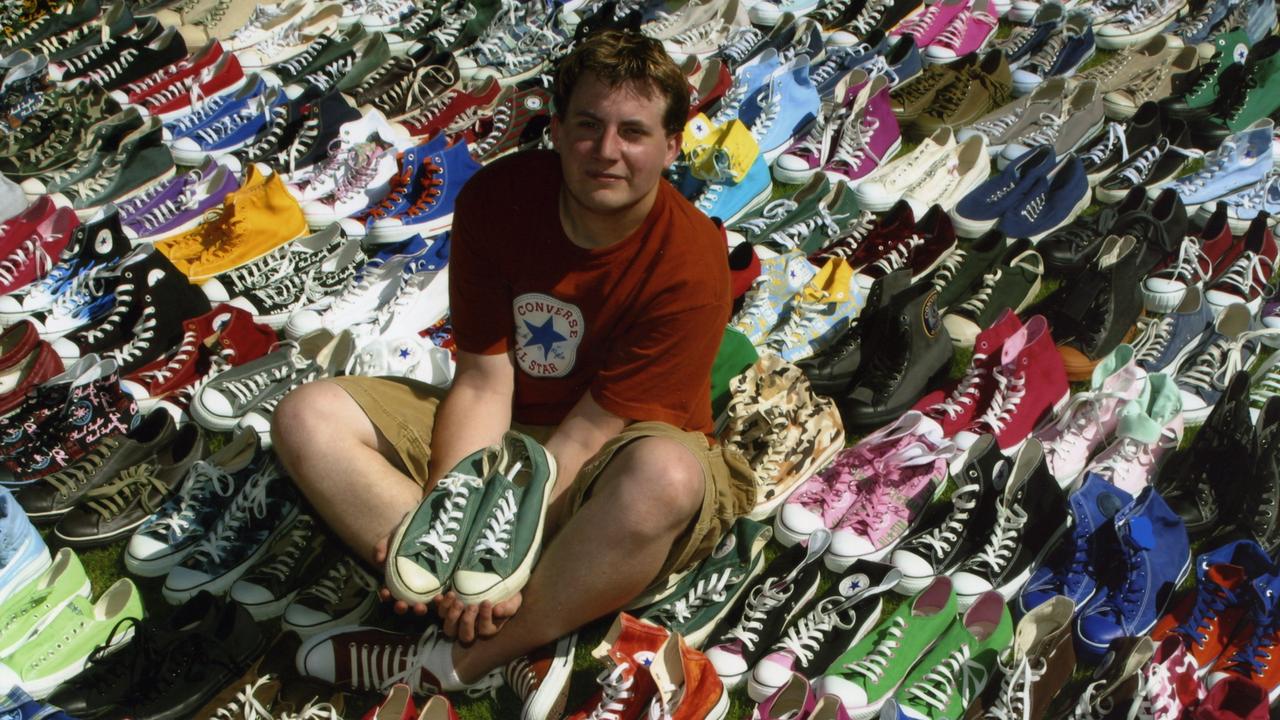 The Guinness World Record for the largest collection of Converse shoes belongs to American Joshua Mueller, who owned 1546 different pairs.

If you thought a global pandemic would hold back wannabe* world-record setters, think again.

The latest edition of the Guinness World Records is about to be released and it’s packed with as many weird and wonderful achievements as ever.

“This year’s book has been compiled* in the most extraordinary of circumstances,” said editor-in-chief Craig Glenday.

“Halfway through writing it, the world was turned upside down by COVID-19, but despite lockdowns and quarantines, it’s not stopped people from breaking records at home or on social media.

“So you can expect the usual mix of awesome achievements, incredible human bodies and the latest from the worlds of science, sport, gaming, music and movies.”

Here are some of the coolest and craziest records you will find in the new edition of Guinness World Records. MOST DANCE MOVES BY A BIRD
Snowball the sulphur-crested cockatoo holds this record, with 14 dance moves. Snowball’s owner Irena Schulz, from Bird Lovers Only rescue centre in the US state of South Carolina, has been entertaining online audiences with the cocky’s co-ordinated dance routines for more than a decade. Researchers analysed six of Snowball’s videos from September 2008, when he was 12, and identified 14 distinct dance moves when Queen’s Another One Bites the Dust and Cyndi Lauper’s Girls Just Wanna Have Fun were playing. Snowball’s moves included head banging, head shaking and foot lifting. Ayanna Williams with her extremely long fingernails — so long we can’t quite fit them all in the photo, no matter what shape we make it. Picture: Kevin Scott

LONGEST FINGERNAILS
The longest fingernails on a pair of hands measure a combined 576.4cm. They belong to American Ayanna Williams, who set the record on February 7, 2017 in Houston, Texas, US.

LARGEST CONVERSE COLLECTION
The record for the largest collection of Converse shoes belongs to American Joshua Mueller, who owned 1546 different pairs of the classic sneakers. He set his record on March 8, 2012 in Lakewood, Washington, US. 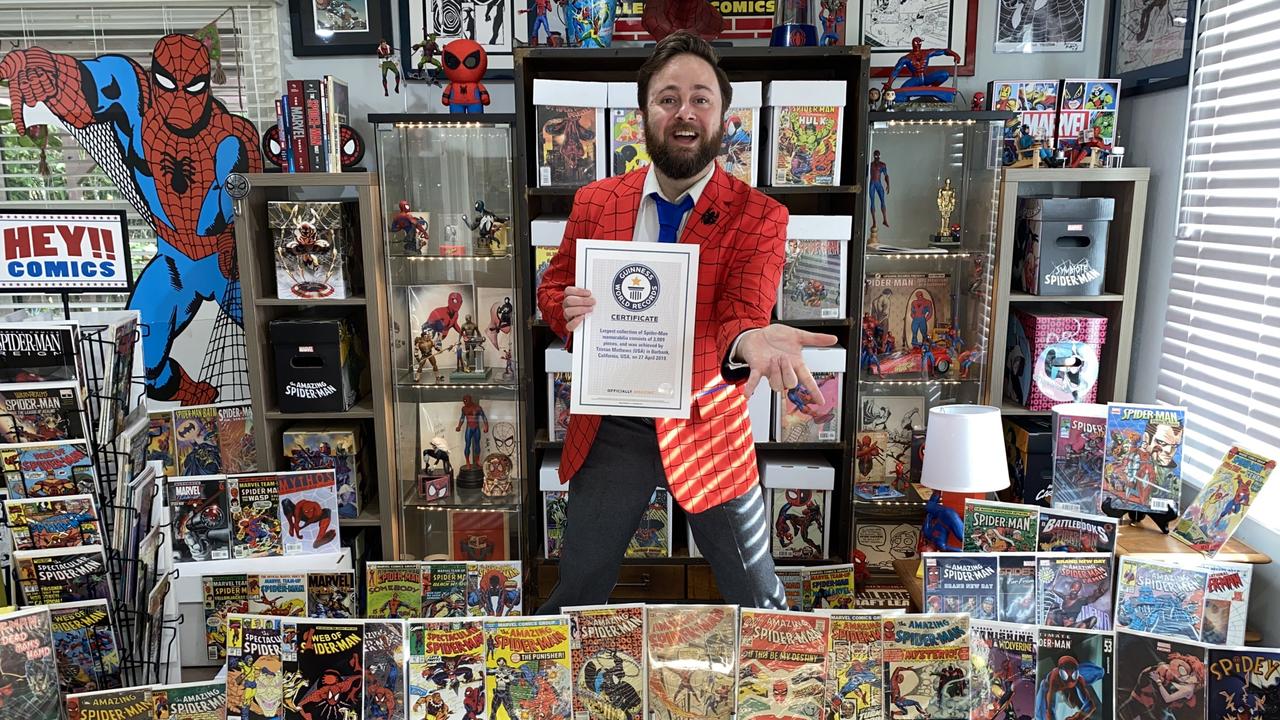 Tristan Mathews with some of this Spider-Man memorabilia.

LARGEST SPIDER-MAN MEMORABILIA COLLECTION
Another American, Tristan Mathews, has the record for the largest collection of Spider-Man memorabilia* at 3089 pieces. That is some Spider-Man fan! The record was set on April 27 last year in Burbank, California, US. 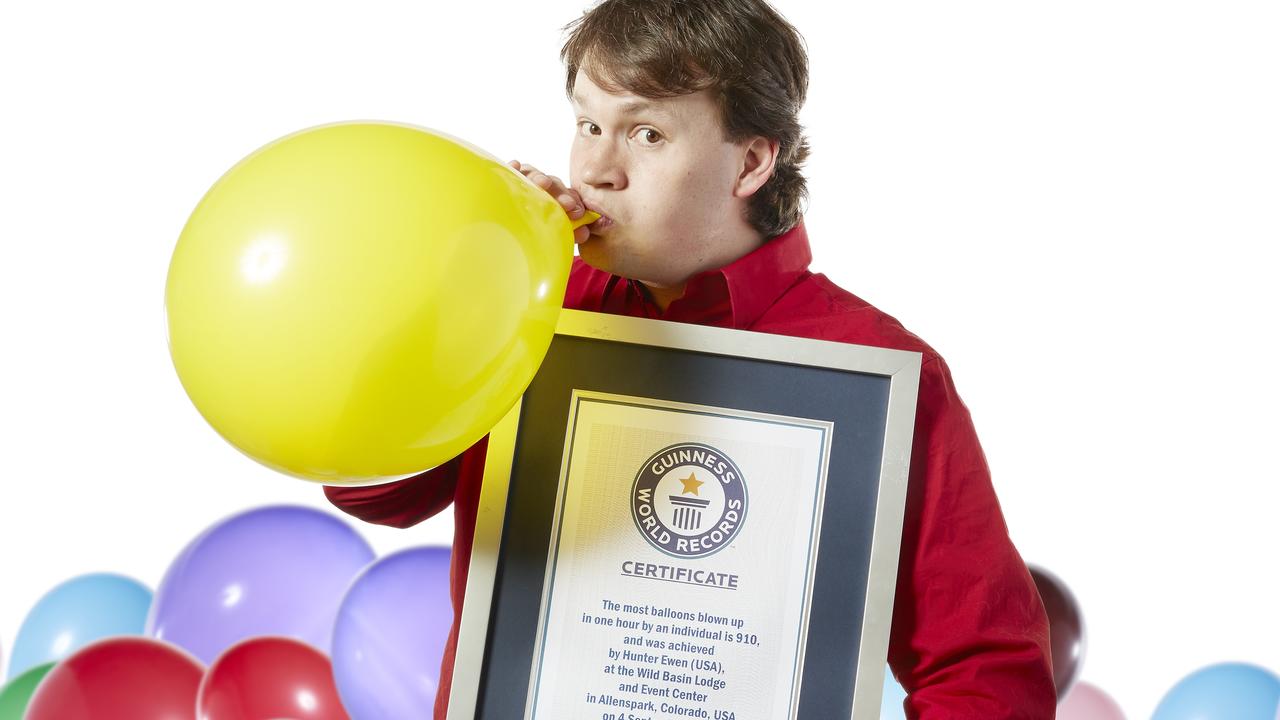 Hunter Ewen holds the record for the most balloons blown up in an hour.

MOST BALLOONS BLOWN UP
Hunter Ewen sure must have been full of hot air when he inflated 910 balloons on September 4, 2015 in the US state of Colorado. He set the record for the most balloons blown up by an individual in one hour.

FARTHEST DISTANCE WALKING BAREFOOT ON LEGO
Anyone who has ever trod on a single mislaid* piece of Lego can only imagine the pain felt by Salacnib “Sonny” Molina as he walked barefoot over the toy bricks for 3869.84m. His record was set on November 14 last year in the US state of Illinois.

OLDEST PERSON
Japanese woman Kane Tanaka celebrated her 117th birthday on January 2. On February 12 in Fukuoka she was verified* as the oldest living person at 117 years and 41 days.

HIGHEST GROSSING ANIMATED MOVIE SERIES
The four Despicable Me movies brought in a whopping $3,713,742,291 at the worldwide box office as of January. Australia Zoo giraffe, Forest, has officially made it into the Guinness World Records for being the tallest living giraffe. Picture: Australia Zoo

TALLEST LIVING GIRAFFE
Forest the giraffe — who lives at Australia Zoo in Queensland – has been confirmed as the world’s tallest giraffe, standing at 5.7m. His record height was confirmed on December 4 last year.

You can read about Forest in our recent Kids News story HERE. Dion McLeod from Dapto, NSW, will appear on the cover of Guinness World Records 2021 as an illustration on a whoopee cushion.

DION HAS IT COVERED
Bookworm Dion McLeod realised he’d probably never make the pages of the Guinness World Records, so he figured he’d try for the cover.

Mr McLeod, 31, from Dapto in NSW, has been immortalised* on the cover of the book’s latest edition, in caricature* form on a giant whoopee cushion in the bottom left corner.

“I saw the competition come up on my Twitter timeline and entered as a long shot,” he said.

“I have always loved Guinness World Records and all the fun facts and human feats. I figured since I will likely never be in the book, I should try and get on it instead.”

Mr McLeod said the record book holds a lot of nostalgia* for him and many other Australians.“Guinness World Records always brings back feelings of Christmas for me. That is when a copy would arrive in our house and I would disappear and just get lost in the world of human feats,” he said.

“It has this nostalgic vibe to it, and it is something I think everyone can relate to reading and annoying everyone around them with all the facts at some stage in our lives.”

While he admits he’s unlikely to ever be a world-record setter himself, his best shot would be his book collection.

“I don’t really have many special skills or anything like that, so I think the one that I would love to have in a perfect world would be the world’s largest private book collection,” Mr McLeod said.

“I am up to about 1500 books in my home at the moment (with very little space left to house them), and I know I have a long way to go yet. My dream home would have the library from Beauty and the Beast and just be packed with books.” Dion McLeod’s illustration of him on a whoopee cushion is the pink shape at the bottom left of the book cover.

Australians on quest to be best

CLASSROOM ACTIVITIES
1. Break a Record
Think of something unique that you could do at home to set a new world record. Imagine that you are going to try it. Write a diary of your experiences trying to set your own world record.

2. Extension
Imagine that you have the world’s longest fingernails. What would your everyday life be like? Write a diary entry for one day. (Don’t forget to think about about how you would be able to write!)

VCOP ACTIVITY
Verb adventures
With a partner see if you can identify all the doing words/verbs in this text. Highlight them in yellow and then make a list of them all down your page.

Now see if you and your partner can come up with a synonym for the chosen verb. Make sure it still makes sense in the context it was taken from.

HAVE YOUR SAY: Which Guinness World Record do you dream of setting?
No one-word answers. Use full sentences to explain your thinking. No comments will be published until approved by editors.