The 22-year-old from Melbourne set the new record in just 38 moves — or almost 10 moves a second.

Mr Zemdegs has been making the news with the 26-squared, brightly coloured puzzle at least since 2009, when he was 13. That year he made it to the Australasian* championships in New Zealand, where he broke all the Australian records.

And he’s been getting faster ever since.

At Sunday’s event he beat his previous* record of 4.59 seconds, but insists* he is “no genius*”. 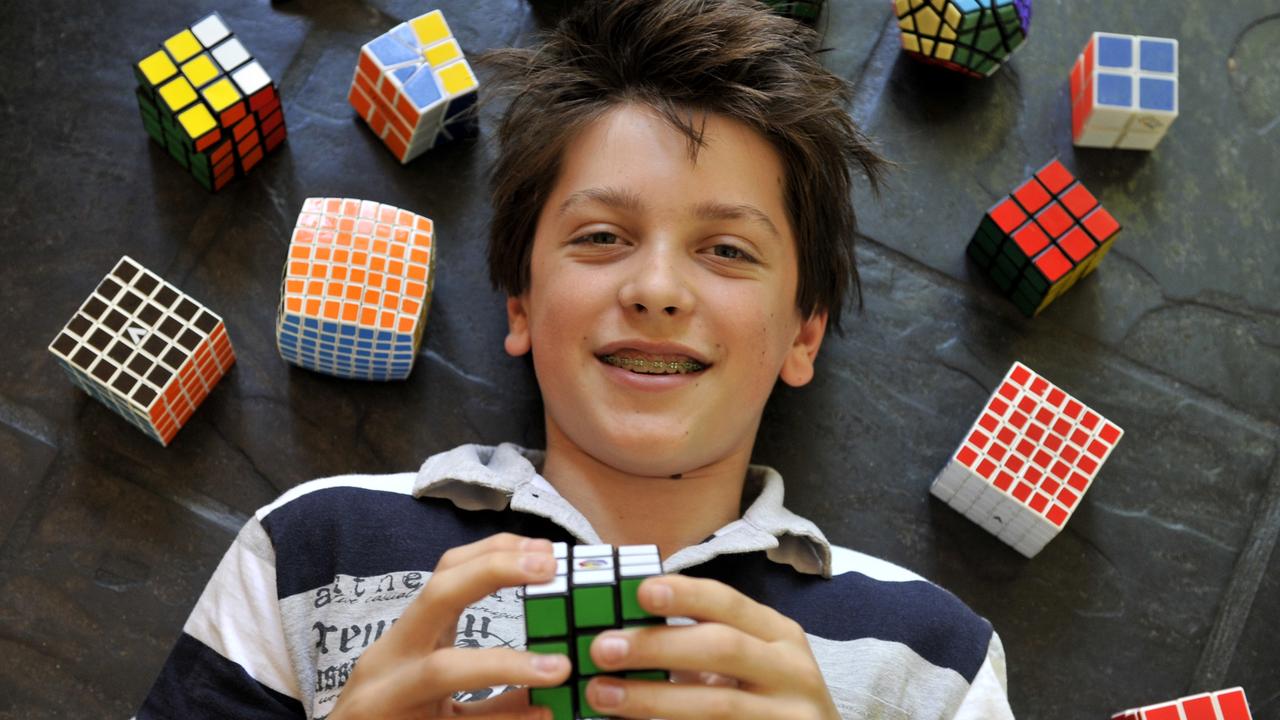 Feliks Zemdegs in 2009, when he broke all Australian Rubik’s cube records at the age of 13.

“There’s a general misconception* that being able to solve a cube is really hard, but anyone can learn how to solve it,” the University of Melbourne engineering* student said.

He owns more than 100 cubes, each one wearing out after six to nine months of practice.

And it’s no wonder they break down: he spent up to two hours a night practising for Sunday’s fundraising* competition, Cubes for Cambodia, held at Melbourne school Ivanhoe Grammar.

“I have no specific* goal. I just go to competitions and try to do as fast as I can,” he said.

The event’s 100 competitors* included three others who could solve the cube in less than eight seconds.

Past Ivanhoe Grammar student Ethan Pride, 18, has run the event for four years, raising more than $8000 to go towards materials to build schools overseas in student-run projects.

But there’s always next year.

CLASSROOM ACTIVITIES
1. A mighty big number
We know from the story that there are 43 quintillion different ways that a Rubik’s cube can be scrambled. The precise number is actually 43,252,003,274,489,856,000 — that is a mighty big number! Imagine how clever you would sound if you could say the name of a number like that!

Well, maybe you can.

Use the commas in the number to help you break it down into parts:

With a partner, practise saying this very large number, working together on any parts you are finding tricky. When you and you partner feel confident get your teacher to listen to you say the number out loud to check that you’ve got it.

Extension: Write your own 20-digit number making sure that you carefully place your commas to separate your number into blocks of three digits. Then use the same method as above to practise saying your new number.

2. Number facts
Find the following numbers in the news story and write an explanation to go with each number that explains it’s significance to the article. The first one has been done for you to help you understand what is required.

VCOP ACTIVITY
With a partner see if you can you identify all the doing words/verbs in this text.

Highlight them in yellow and then make a list of them all down your page.

Now see if you and your partner can come up with a synonym for the chosen verbs.

Make sure it still makes sense in the context it was taken from.

IN ONE SENTENCE, TELL US WHAT YOU THINK ABOUT THIS STORY
Please do not use one-word answers. Explain what you enjoyed or found interesting about the article. Use lots of adjectives.

IF YOU LIKED THIS STORY, YOU MAY LIKE TO READ THESE

Aussie climber on top of the world