Can you crack the 30-year-old CIA code? The puzzle at the CIA’s headquarter is made up of four segments, one of which remains unsolved. Picture: Getty Images

The final clue to a coded message unveiled 30 years ago has been revealed by the code’s creator.

Artist Jim Sanborn built the copper sculpture, known as Kryptos, in a courtyard at the CIA headquarters in Langley, Virginia, US, in 1990. The CIA is the US spy agency. The coded sculpture has been outside the CIA Headquarters in the US since 1990. Picture: Rex features

The code is made up of four passages, three of which have been solved by code breakers.

The fourth and final passage has never been cracked.

Sanborn has already handed out two clues to help push puzzlers towards a solution.

He’s now released what he says is the third and final clue for the segment, reports the New York Times. Jim Sanborn has released what he says is the third and final clue for the segment.

Each passage of text follows a theme of concealment* and discovery, each more tricky to unravel than the last.

The first reads: “BETWEEN SUBTLE SHADING AND THE ABSENCE OF LIGHT LIES THE NUANCE OF IQLUSION.”

The last word, “illusion”, was misspelled on purpose to make the puzzle harder according to Sanborn.

The location of CIA headquarters by latitude* and longitude* is included in the second puzzle.

It asks: “DOES LANGLEY KNOW ABOUT THIS? THEY SHOULD: IT’S BURIED OUT THERE SOMEWHERE. X WHO KNOWS THE EXACT LOCATION? ONLY WW.”

The “WW” is a reference to William Webster, who was CIA boss when the sculpture was put in place.

Sanborn handed him a key for deciphering* the messages.

The text reads: “SLOWLY, DESPARATLY SLOWLY, THE REMAINS OF PASSAGE DEBRIS THAT ENCUMBERED THE LOWER PART OF THE DOORWAY WAS REMOVED. WITH TREMBLING HANDS I MADE A TINY BREACH IN THE UPPER LEFT-HAND CORNER. AND THEN, WIDENING THE HOLE A LITTLE, I INSERTED THE CANDLE AND PEERED IN. THE HOT AIR ESCAPING FROM THE CHAMBER CAUSED THE FLAME TO FLICKER, BUT PRESENTLY DETAILS OF THE ROOM WITHIN EMERGED FROM THE MIST. X CAN YOU SEE ANYTHING? Q”.

Again, spelling and punctuation errors were added in to make the puzzle harder. 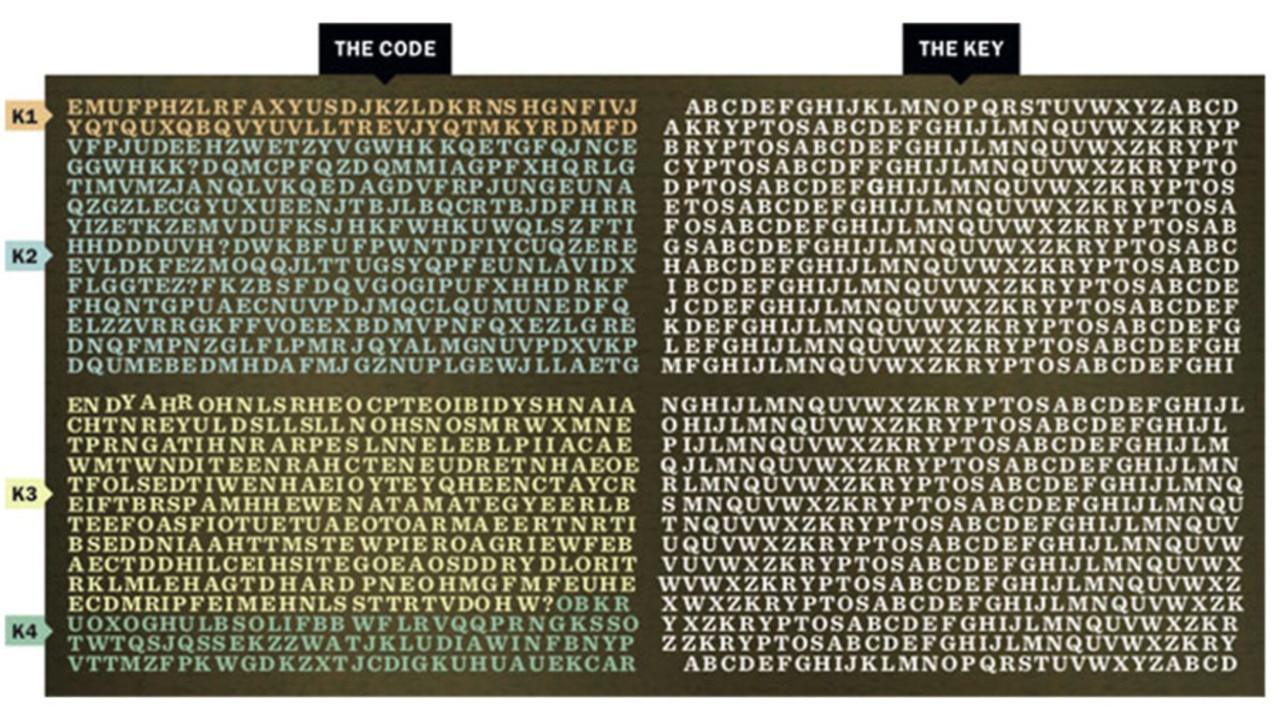 The Kryptos and the key

UNSOLVED CODE
The final section remains unsolved, and is therefore a jumble of letters awaiting decryption*.

Until recently, Sanborn had provided two clues in the form of words that appear in the decrypted text.

In 2010, he revealed the word “BERLIN” appeared in the 64th through 69th positions in the final passage.

Four years later, he disclosed* that the word “CLOCK” made up the next five letters.

THE FINAL CLUE
Now, Sanborn has revealed the word “NORTHEAST” appears at positions 26 through 34.

He has set up an email system through which anyone can submit solutions – though it costs $US50 ($AUD74) a go.

The 74-year-old told The Times he wasn’t sure the puzzle would be solved before his death.

“For the past few years I have been trying to figure out how to have this ‘system’ survive my death,” he said.

This story was originally published in The Sun and was republished with permission. Jim Sanborn isn’t sure the code will be solved in his lifetime. Picture: Rex features

CLASSROOM ACTIVITIES
1. What’s the point?
Why do you think Jim Sanborn decided to create this sculpture, with such a difficult coded message for the CIA? Write down as many reasons as you can think of.

2. Extension
Create a special coded message or puzzle that could be placed in your school playground for other kids to try to solve. Make it as tricky as you can.

HAVE YOUR SAY: Do you think anyone will ever crack the code? Do you have any idea of the answer?
No one-word answers. Use full sentences to explain your thinking. No comments will be published until approved by editors.