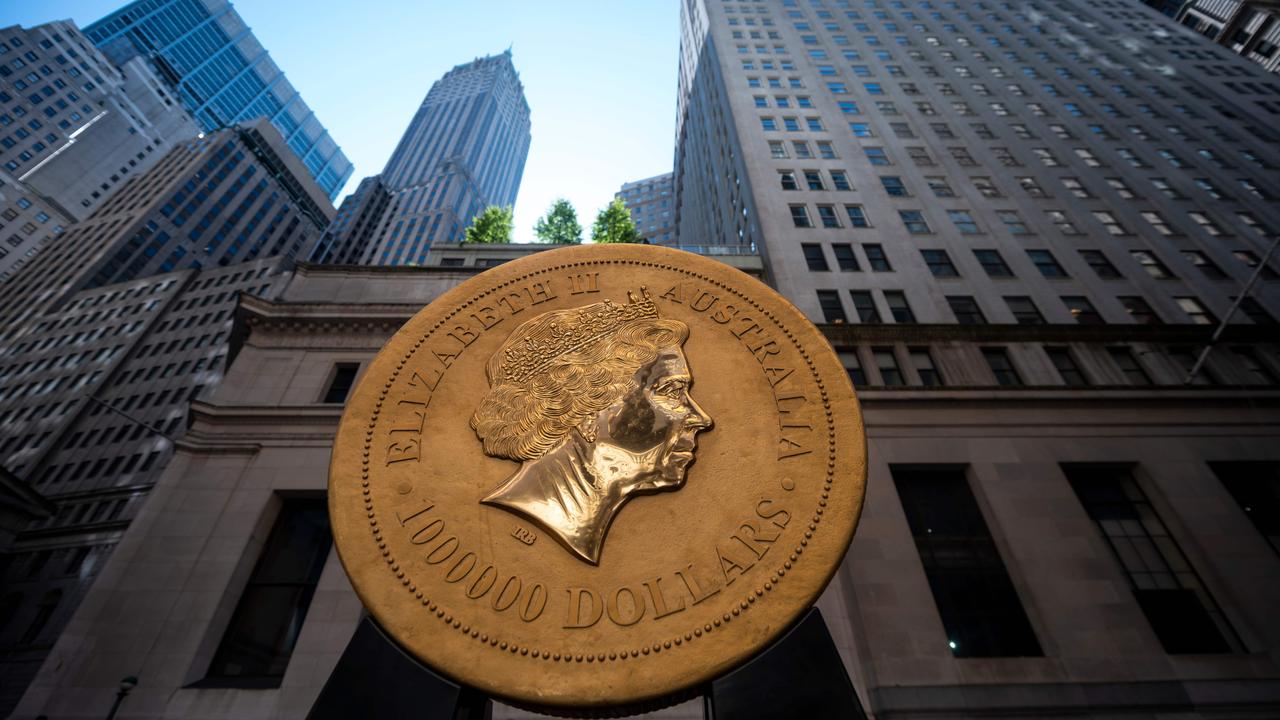 A gold coin, produced by Perth Mint, worth $60 million and weighing one tonne stands on display at the New York Stock Exchange on July 16. Picture: AFP

The Australian gold coin that is the world’s biggest and heaviest was the star attraction at the New York Stock Exchange in the US on Wednesday.

The colossal one tonne gold coin is 99.99 per cent pure gold and is 80cm in diameter* and 13cm deep.

It is recognised by Guinness World Records as the largest coin ever created.

It was crafted at the Perth Mint in Western Australia and was on display at the New York Stock Exchange (NYSE) to promote Australian gold being made available to US buyers.

It was worth $50 million when it was cast* in 2012 but its value has risen to more than $60 million as the world gold price rises.

Gold has recently been selling for all-time high prices of more than $2000 an ounce. Gold is weighed in ounces. One ounce is equal to 28.35g, which is lighter than one large chocolate Freddo frog.

The mega coin shows the Australian kangaroo. Its inscription* reads: AUSTRALIAN KANGAROO 1 TONNE 9999 GOLD, with the year 2012 also inscribed* on it.

The other side of the coin portrays the Ian Rank-Broadley effigy of Queen Elizabeth II and the monetary* denomination* of one million dollars.

VIDEO: Watch the big gold coin being made at the Perth Mint

The coin was issued as legal tender* under the Australian Currency Act 1965, a set of laws controlling the making and distribution* of Australian money.

Although the coin is usually at the Mint’s Gold Exhibition in Perth, the coin was taken on a tour across Europe and Asia in 2014. 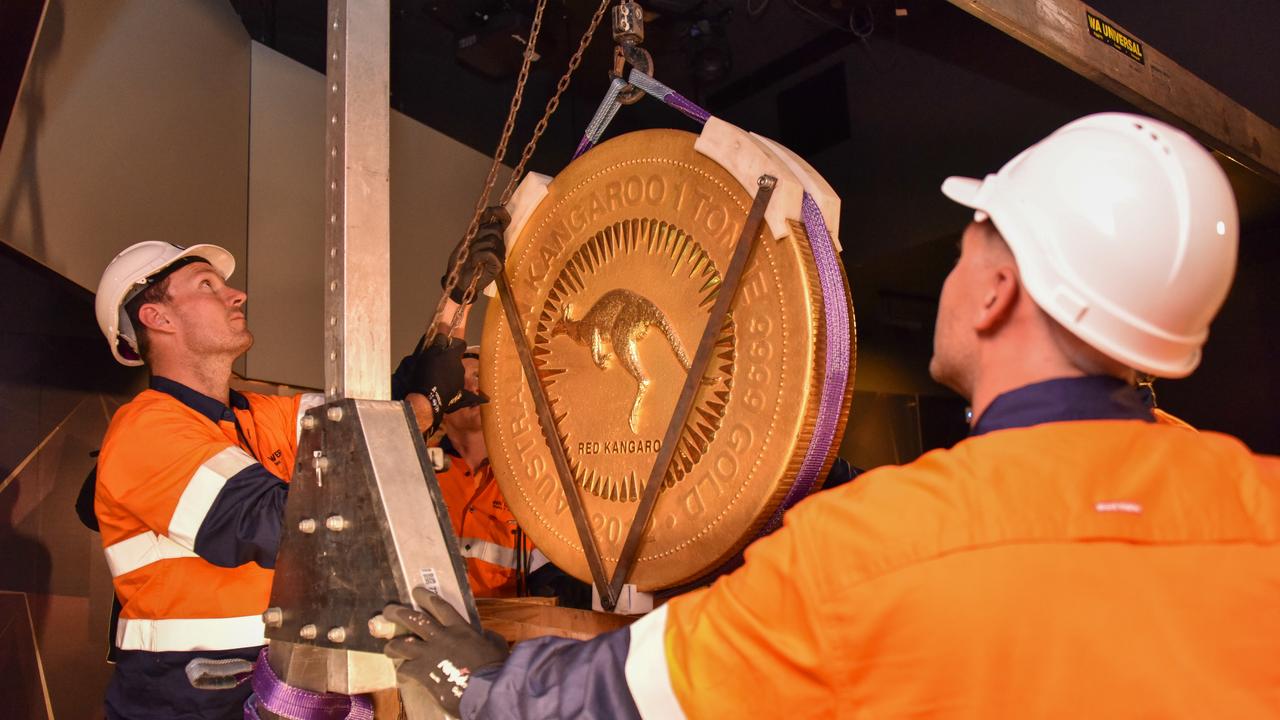 The 99.99 per cent pure gold coin measuring 80cm wide and 13cm deep being lowered into a transport crate for its trip to the US. The coin ways one tonne, so it can’t be lifted by a person. Picture: Perth Mint

Its day on display outside the NYSE on Wall Street, New York was to mark the official launch of the Perth Mint Physical Gold Exchange Traded Fund (AAAU). This is a gold trading organisation to buy and sell actual, physical bars of gold rather than just electronic transactions.

When someone buys gold from AAAU on the NYSE, they are buying a bar of gold that is stored in a vault at the Mint in Perth. 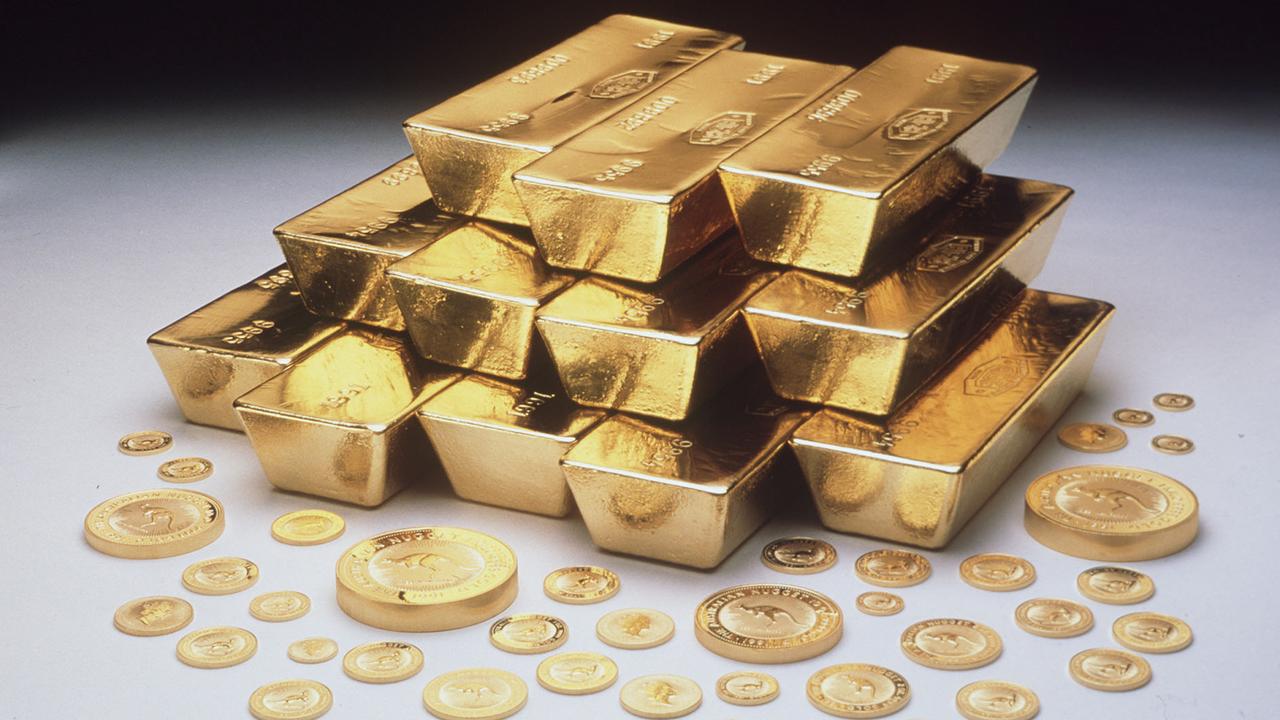 Bars of gold and special coins from the Perth Mint.

“Every AAAU share is backed by physical gold stored in our central bank-grade vaulting facilities in Perth, so at any time investors may choose to exchange part or their entire holdings* for a delivery of physical gold to their door,” he said.

Along with the display of the giant coin, Perth Mint chief executive Richard Hayes got to celebrate the organisation’s big day by ringing the bell to signal the end of the trading day on the NYSE, which is regarded as an honour.

New 50c coin is unique in any language

How does the Australian dollar get its value?

CLASSROOM ACTIVITIES
1. Design a Coin
In the story you have read about the design of the gold coin. Imagine that the Australian government has decided to replace the five dollar note with a new five dollar coin. They have asked you to design it. One side of the coin must have an effigy, or image, of Queen Elizabeth, but the other side is up to you! Think of something that is important or a symbol for Australia or Australians for your design. Then, write a paragraph explaining why you chose your design.

2. Extension
Write a speech for Richard Hayes, chief executive of the Perth Mint, to make at the New York Stock Exchange. The purpose of the speech is to encourage people to invest their money in Australian gold.

VCOP ACTIVITY
Over-the-top marketing!
A coin worth more than $60 million dollars, just to advertise Australian gold being available to US buyers. It seems a bit extreme.

Have you seen other forms of advertising that seems over the top?

Why do you think advertisers would choose to go to such extreme measures to promote their product?

Pick a favourite toy, sport or hobby that you have. If you had an unlimited amount of money to advertise your favourite item, what would you do and why?

HAVE YOUR SAY: If you could design an Australian coin, what would you put on the opposite side to the Queen’s effigy? Why?
No one-word answers. Use full sentences to explain your thinking. No comments will be published until approved by editors.