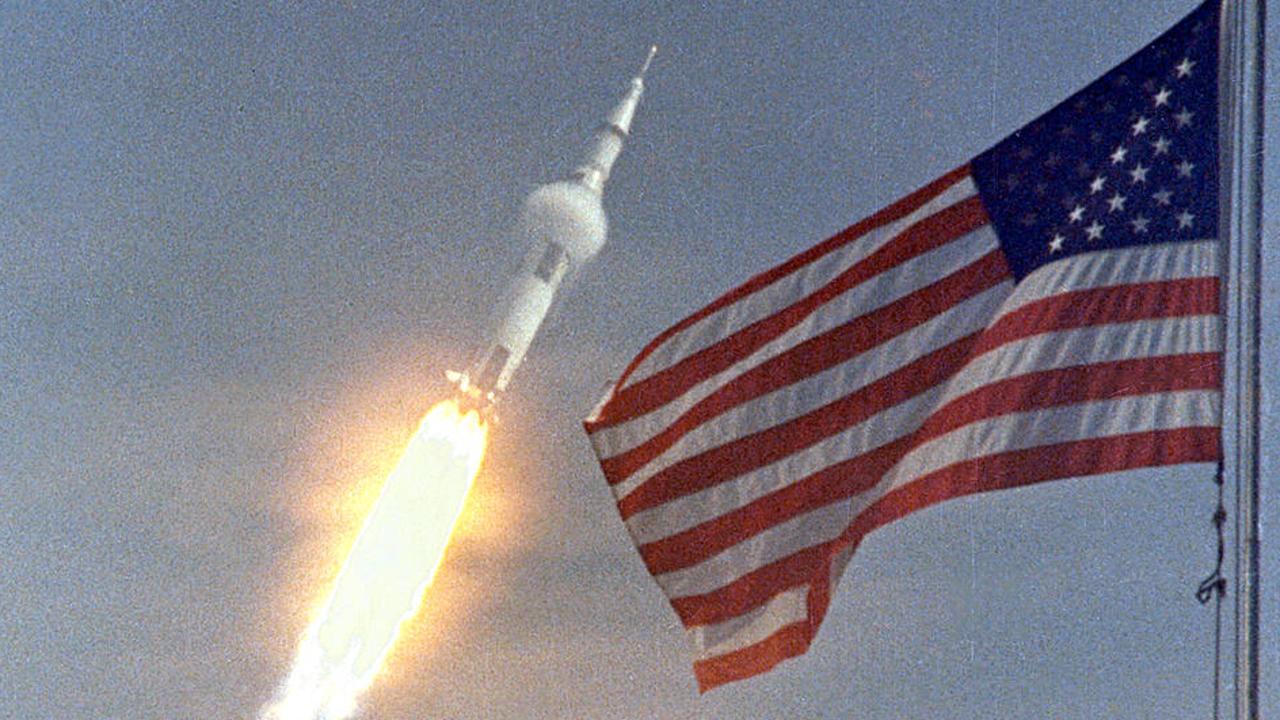 The Saturn V was a massive rocket built by NASA to send humans to the moon.

It was called a Heavy Lift Vehicle and was the most powerful rocket that had ever flown successfully. The Saturn V was used in the Apollo space program in the 1960s and 1970s.

The rocket was developed at NASA’s Marshall Space Flight Centre in Huntsville, Alabama and its job was to launch the Apollo spacecraft, which housed the astronauts and was attached to the top of the rocket, into space.

The first Saturn V that launched with a human crew was Apollo 8. On this mission, astronauts orbited the moon but did not land. On Apollo 9, the crew tested the Apollo moon lander by flying it in Earth orbit without landing.

On Apollo 10, the Saturn V launched the lunar lander to the moon. The crew tested the lander in space but did not land it on the moon. Saturn V rocket that took Apollo 11 to the moon.

Saturn V had three stages. Each stage would burn its engines until it was out of fuel and would then separate from the rocket. The engines on the next stage would then fire and the rocket would continue into space.

Stage 1: Had the most powerful engines, since it had the challenging task of lifting the fully fuelled rocket off the ground to an altitude* of about 68km. Used liquid oxygen and kerosene

Stage 3: This final stage placed the Apollo spacecraft into Earth’s orbit and pushed it towards the moon. The first two stages fell into the ocean after separation. The third stage either stayed in space or hit the moon. Stage three was fuelled by liquid hydrogen and liquid oxygen.

Sitting at the top of Saturn V was the Apollo spacecraft, which had four components. Lunar module that landed on the moon for Apollo 11 mission

1. Lunar module
The lunar module was the part that actually landed on the moon.

It was only 7m tall and 9m wide and had two sections: the upper ascent* stage and the lower descent* stage.

The lower stage had the landing gear, lunar surface experiments and the descent rocket engine. When the mission was over, the lower stage provided a launch platform and was left on the moon. The upper stage flew back to reattach to the command module and was left behind in space after the three astronauts were reunited.

2. Service Module
This contained many of the Apollo spacecraft’s important systems including oxygen tanks, fuel cells, batteries and engines. Once the spacecraft separated from the final stage of the Saturn V, the service module provided the thrust or power needed to put the spacecraft into orbit, adjust the spacecraft’s route, pitch, roll and yaw (the rotation about the three axes of the spacecraft).

This module was left behind just before re-entry into the Earth’s atmosphere. 3. Command Module
This is where the astronauts travelled for most of the moon mission. The command module housed all the controls and dashboard used to monitor the spacecraft.

They travelled back to Earth in the command module, flown by Collins, and re-entered the atmosphere with its heat shield facing the planet, to defend against the high temperatures caused by atmospheric friction*.

4. Escape Rocket
This tower-shaped structure looked like a small rocket and was there to give the astronauts a quick escape in the case of a launch failure by pulling the command module away from the launch vehicle. The Saturn V rocket with the Apollo 11 crew aboard lifts off from Kennedy Space Centre in Florida. Picture: NASA/AFP

NASA tests engine for most powerful rocket in history

THE NEXT POWERFUL ROCKET
NASA announced in June this year that it had made good progress in building the core stage to power its next-generation heavy-lift rocket on new missions to the moon.

NASA and its lead contractor Boeing have assembled four-fifths of the massive stage needed to launch the Space Launch System (SLS) and the Orion spacecraft.

The US hopes the SLS and Orion spacecraft will be used to send the first woman and the next man to the moon by 2024.

The core stage is currently 58m long, or the size of 12 cars parked end-to-end, making it the largest rocket stage NASA has ever built since the Saturn V stages sending humans to the Moon nearly 50 years ago.

When it’s finished, the core stage will tower at about 65m and includes two propellant tanks and four RS-25 engines.

Part 4: Training for the Apollo 11 mission

Part 6: The launch and journey to the moon

HAVE YOUR SAY: If you could choose which module to fly in on a mission to the moon, would you choose the lunar module or the command module?
No one-word answers. Use full sentences to explain your thinking. No comments will show until approved by editors.