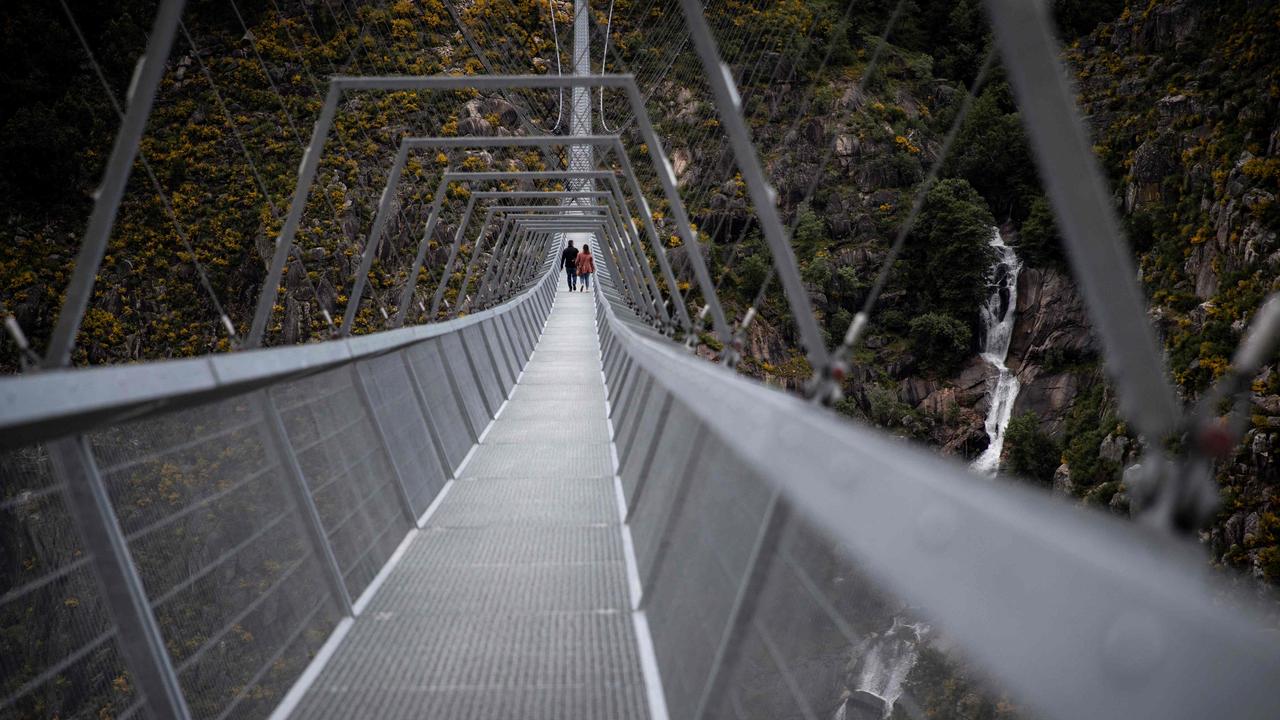 Hanging 174m above the ground and with a see-through metal grid that wobbles with each step, you have to be brave to tackle the world’s longest pedestrian suspension bridge.

The 516m long bridge recently opened in Portugal, suspended between rocky mountains in the Arouca Geopark above the Paiva River.

It took two years and $3.6 million to build before it opened to the public on May 3. Before the public opening, locals were given the chance to try it out. 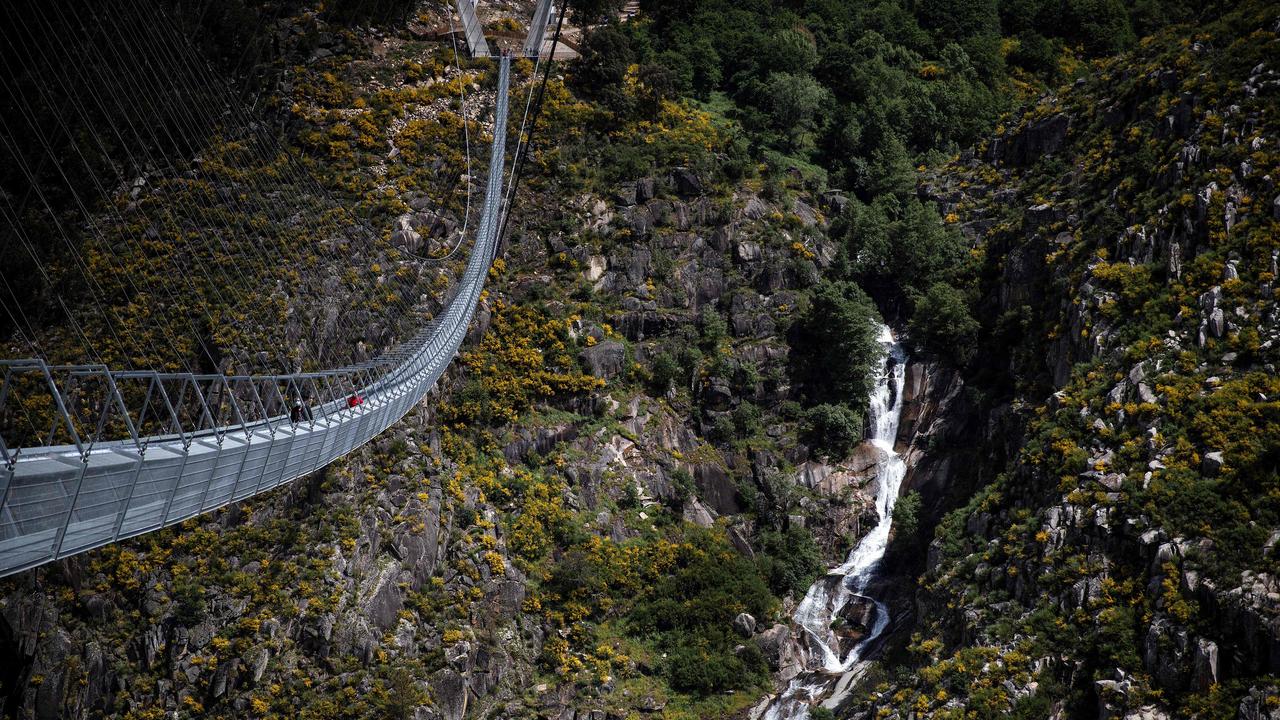 The bridge is suspended between rocky mountains 174m above the ground and the Paiva River in Portugal. Picture: Carlos Costa/AFP

One local from the little northern Portuguese town of Arouca, Hugo Xavier, said he was “a little afraid” but crossing the bridge was “extraordinary.”

“Oh … here we go,” said the 42-year-old as he got up the courage to step onto the see-through metal grid pathway along with his equally jittery* partner and a tour guide.

The landscape below is calm, but the crossing is not for the faint-hearted*. Held up by steel cables and two massive towers on each side, the bridge wobbles a little with every step.

“I was a little afraid, but it was so worth it,” a relieved Mr Xavier said when he reached the other side.

“It was extraordinary, a unique experience, an adrenaline rush*.”

Locals hope the bridge will become a tourist attraction and help revive* the region, especially after the devastating impact of the COVID-19 pandemic.

“It is a breath of fresh air for our land because it will attract more investment, more people,” said tour guide Emanuel.

He said people in the region were getting older as many young people moved to big cities.

“It will bring a new dynamic* to Arouca,” Emanuel said. 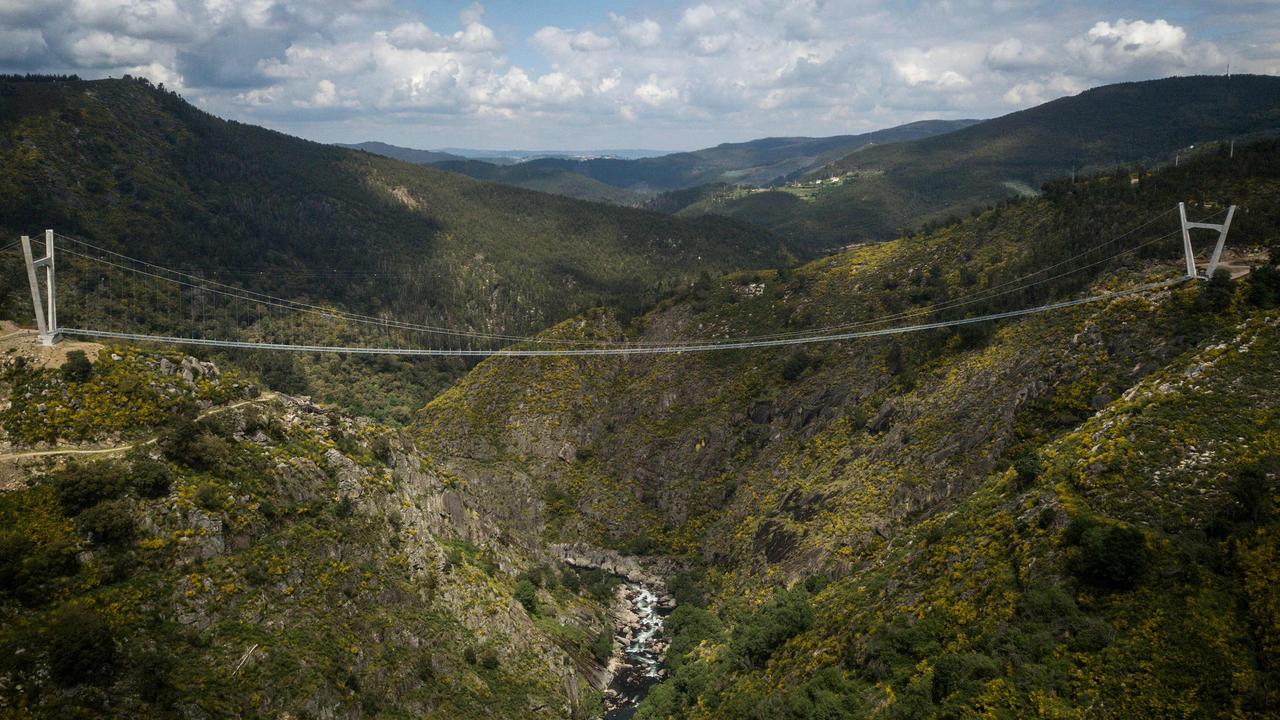 Locals hope the bridge will become a tourist attraction and bring people to the region. Picture: Carlos Costa/AFP

Standing on the bridge, the mayor of Arouca, Margarida Belem, said the bridge was part of a wider strategy to encourage more people to move and stay in the region.

“There were many challenges that we had to overcome … but we did it,” the proud mayor said.

“There’s no other bridge like this one in the world.”

CLASSROOM ACTIVITIES
1. Build a bridge challenge
You will need:

You have 15 minutes to create a bridge that spans the gap between the 2 tables or chairs. You may move the tables/chairs closer together or further apart. The bridge must be capable of holding a 1kg weight. When the 15 minutes is up, test each team’s bridge. The team with the longest spanning bridge capable of holding 1kg wins!

2. Extension
Discuss the following with your teammates (or competitors if you worked individually):

Search for all the adjectives you can find in the article. Did you find any repeat adjectives or are they all different?

Extension
Pick three of your favourite adjectives from the text and put them in your own sentences to show other ways to use them.