An actor as high priestess, holds a torch with the Olympic flame during the 2012 lighting of the flame ceremony in Ancient Olympia, Greece. The flame is always lit in the birthplace of the Ancient Olympics. Picture: AP Photo

In the months before the Opening Ceremony, the torch is carried by thousands of runners in a relay* that starts in Greece before travelling to the country hosting the Games.

The flame for the torch is lit for each Olympics during a special ceremony in the Greek town of Olympia, where the ancient* Olympics were first held about 2800 years ago.

Women wearing the robes of Ancient Greek high priestesses* use the Sun’s rays and a parabolic* mirror to create a flame that lights the torch.

The torch goes on a relay in Greece, before the flame is transported in a few safety lamps by plane to the host country, where it continues its relay journey. Actor Katerina Lechou, acting the high priestess, lights the Olympic Torch in Olympia, Greece in a 2016 rehearsal ahead of the lighting ceremony. Picture: Getty Images

During the relay, people don’t actually pass the torch to each other. Each participant has their own torch, which they carry for a short distance before igniting* the torch of the next person. There are thousands of torches!

The relay route is carefully planned so the torch can be seen by lots of people and pass by impressive landscapes and historical sites.

The final torchbearer uses their torch to light a giant cauldron* in the stadium at the Opening Ceremony, which burns throughout the Games.

The torch is a symbol of peace and friendship, and each Olympics has its own design that needs to resist rain, snow, heat and wind.

The first Olympic torch relay took place at the Summer Games in Berlin, Germany, in 1936.

The torch is mostly carried by runners on foot, but it has also been carried on all sorts of creative transport, including paraglider, surfboat, dog-sled, snow scooter, horse and skis.

It has also been to unusual places, including to the top of Mt Everest, to the North Pole and into space. Cosmonaut Oleg Kotov holds the Sochi 2014 Winter Olympic Games Torch during a space walk outside the International Space Station in 2013. The torch also visited the ISS ahead of the 1996 Summer Games in Atlanta and the 2000 Games in Sydney, but this is the first time it had been along for a space walk. Picture: AFP Photo/NASA TV

For the Sydney 2000 Games, the torch was carried underwater by a diver at the Great Barrier Reef (flare technology kept it alight). It was also carried on a chairlift in Tasmania and on a camel in the outback.

Does the torch ever accidentally go out?

Yes. And more often than you would think!

For example, when Australian athlete Nova Peris carried the torch at Uluru in Central Australia for the Sydney 2000 Olympics, it went out a couple of times. In the latest relay in Japan, it reportedly went out twice on day one.

When a torch goes out, it is relit (or another torch is lit) from a backup lamp carrying the same flame from the Olympia ceremony.

The slogan of the 2020 Tokyo Olympics torch is “Hope lights our way”, which encourages people to support each other and the world to work towards peace.

The slogan is particularly pertinent* for the Japanese, who suffered a devastating earthquake and tsunami* in 2011.

And it became even more meaningful after the Tokyo Games had to be postponed* for 12 months because of the Covid-19 pandemic.

After the flame for the torch was lit in Olympia in March 2020, it was handed to the first torchbearer: Greek shooting champion Anna Korakaki – the first woman in history to launch the torch relay.

While the Games were postponed, the flame was safeguarded* in Tokyo.

The torch is now on a 121-day relay through Japan and is due to arrive at the Tokyo Olympic Stadium for the Opening Ceremony on July 23.

The torch design was inspired by Japan’s famous cherry blossom and has flames coming out of five metal petals at the top. Torch designer Tokujin Yoshioka viewed cherry blossom, which flowers each spring, as a symbol of renewal*.

Part of the torch is made from recycled aluminium used for temporary housing after Japan’s 2011 earthquake and tsunami. 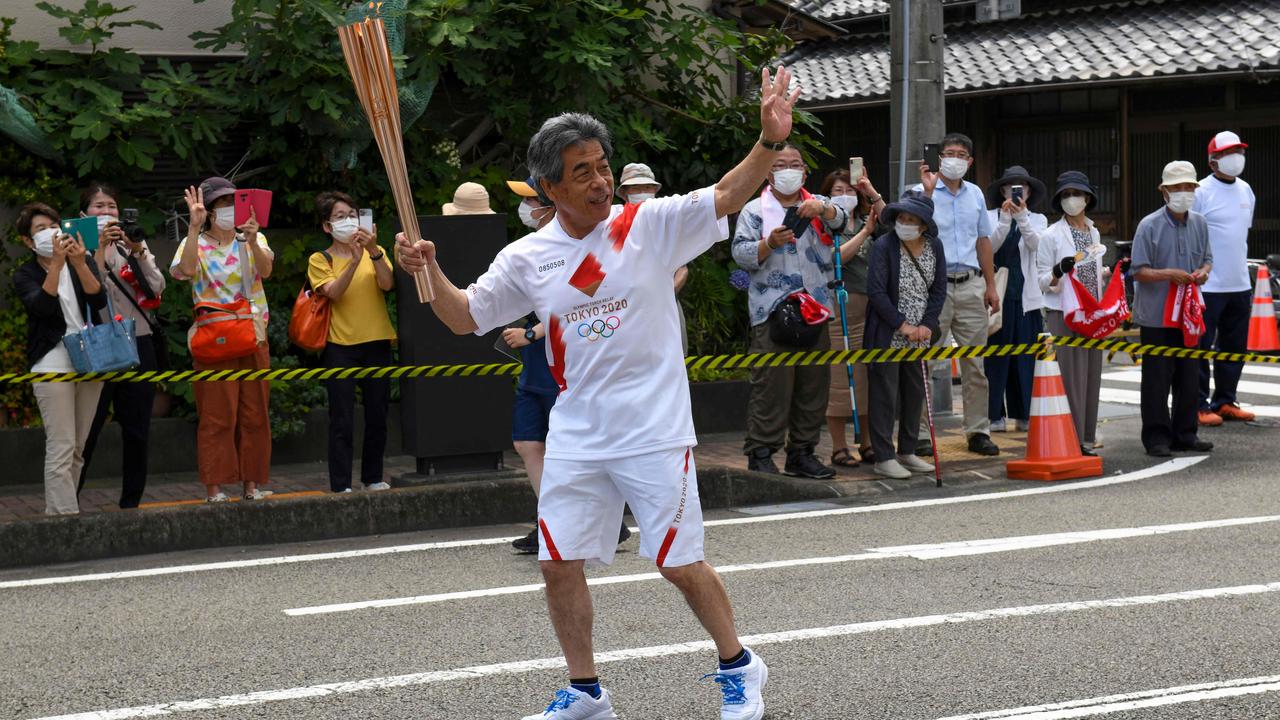 A torchbearer runs with the Olympic torch during the Tokyo 2020 Olympic Games torch relay in Yaizu, Shizuoka prefecture on June 24, 2021. Picture: AFP

Torchbearers are a mix of celebrities, athletes and everyday people who are often inspiring community members.

Until the 1970s, torchbearers were young, male athletes. But at the 1972 Munich Games in Germany, women, people with disabilities and ordinary people living along the relay route were included as torchbearers for the first time.

To be eligible to be a Tokyo 2020 torchbearer, applicants had to be born on or before April 1, 2008, and have a personal connection to the area in which they wished to carry the torch. Any nationality and gender were accepted.

It is a very big honour to be the first or last torchbearer, and they are usually outstanding citizens of their country.

At the Sydney 2000 Olympics, Cathy Freeman, one of Australia’s most highly regarded athletes, was the final torchbearer, using her torch to ignite a ring of fire, which then spectacularly became the cauldron. Cathy Freeman after lighting the cauldron at the Opening Ceremony at the Sydney Olympic Games on September 15, 2000. Picture: AFP

Torch relays were never part of the ancient Olympic Games.

However, the way the Olympic flame is lit – by the Sun’s rays focused into a parabolic mirror – is the same method used by the Ancient Greeks to light the flames that burned constantly at their temples.