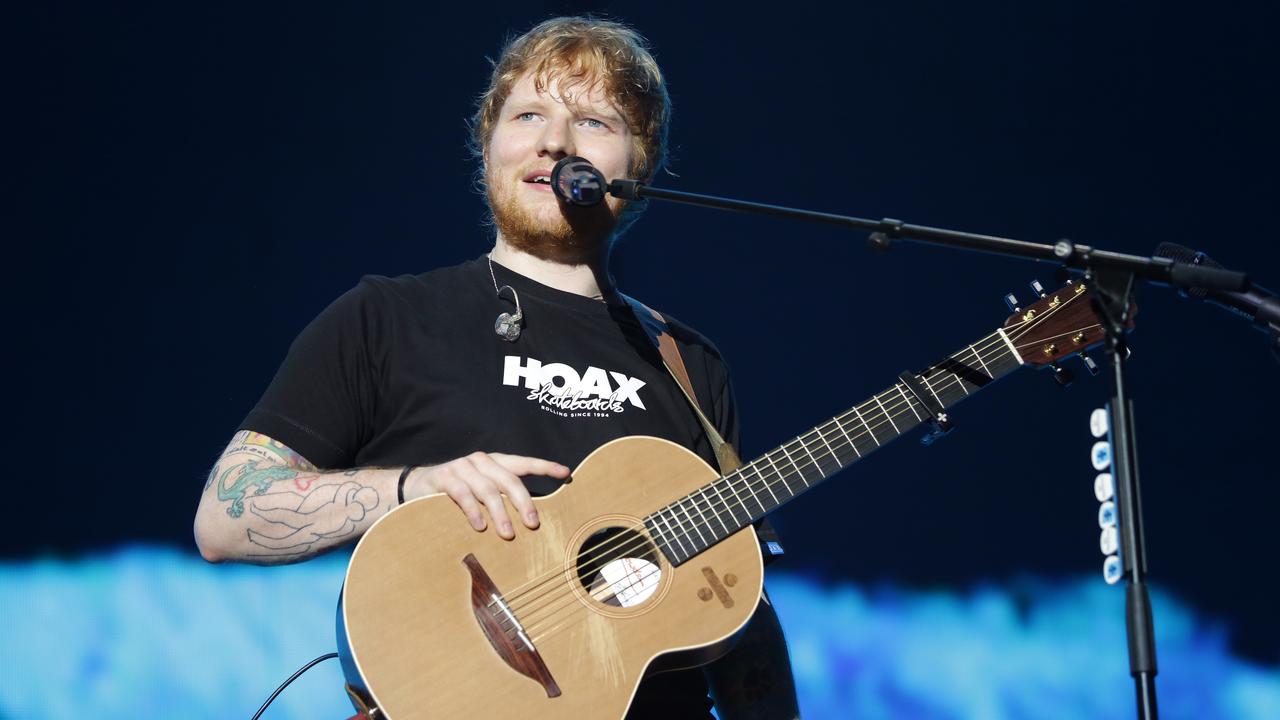 International music superstar Ed Sheeran has sent a message to all Australian schoolchildren and adults asking them to stop bullying.

Using a billboard at his Sydney concert last night, Sheeran, who has sold millions of records around the world, said: “It isn’t big to make others feel small — Ed Sheeran”.

His message coincides with the National Day against Bullying and Violence today. Ed Sheeran hopes both children and adults will take note of the anti-bullying message at his Sydney concert. Picture: Christian Gilles

Almost two million students will stage a national fightback against the bullying and violence that affects thousands of young Australians.

A record 4355 schools across the country have signed on to the national day of action after receiving a letter from Prime Minister Malcolm Turnbull asking them to take a stand against cowardly behaviour.

Student involvement in the anti-bullying campaign has more than doubled since last year.

Students have been asked to imagine a world free from bullying and share their big ideas on action walls, in discussions and other activities in the schoolyard. 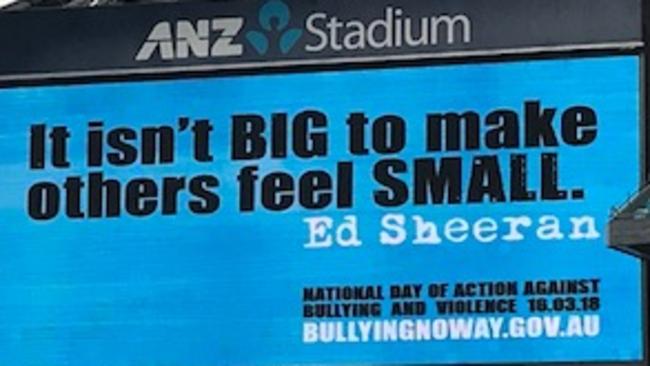 The anti-bullying message on a big screen at the Sydney concert ahead of the 2018 National Day of Action against Bullying and Violence.

Sheeran has been vocal during his career about being bullied as a child for being “a weird kid” and having red hair.

“People don’t like what is different. I think there were three redheads in our school, and that was different… Kids are always gonna find things to pick on other kids for,” Sheeran said about his time at school.

“I was a very, very weird child. Very weird child. And I had a port-wine stain birthmark* on my face that I got lasered off when I was very young, and one day they forgot to put the anaesthetic* on, and then ever since then I had a stutter*,” he told the American Institute for Stuttering’s Freeing Voices Changing Lives Benefit Gala in 2015. Ed Sheeran as a cihld at his piano. He has revealed he was bullied over his looks at school.

“And I also had very, very big blue glasses. And I lacked an ear drum on one side of my face—one side of my ear — so stuttering was actually the least of my problems when I went to school.”

In that speech, Sheeran also revealed that after his parents bought him an Eminem album, he learned how to rap and went on to learn every word of each track, which led to writing his own music, and eventually curing his stutter.

That “weird kid” is now ruling the music world with millions and millions of fans of all ages across the globe.

birthmark: an unusual, typically permanent, mark on someone’s body which is there from birth

anaesthetic: a substance that removes pain during surgery

QUICK QUIZ
1. What was the anti-bullying message Ed Sheeran displayed?
2. What day did it appear on the eve of?
3. How many students are expected to take part in the national fightback?
4. Why was Ed Sheeran  bullied as a child?
5. Name two instruments Ed Sheeran plays.

What do you think you can do to help stop bullying in your school and community? List at least five actions and the reason why you think this will help.

Use this to create a Bully Busting Action Plan. Your plan should include at least five rules for your school and community that will help to people to stay safe.

2. Extension: Pretend you have been asked to speak at your school assembly about the need to stop bullying. Write your speech and list the things that you and your class could do to help tackle bullying in your school.

COMMENT ON TODAY’S STORY
In one sentence, tell us what you enjoyed or found interesting about today’s story. Do not use one-word answers. Use lots of adjectives.