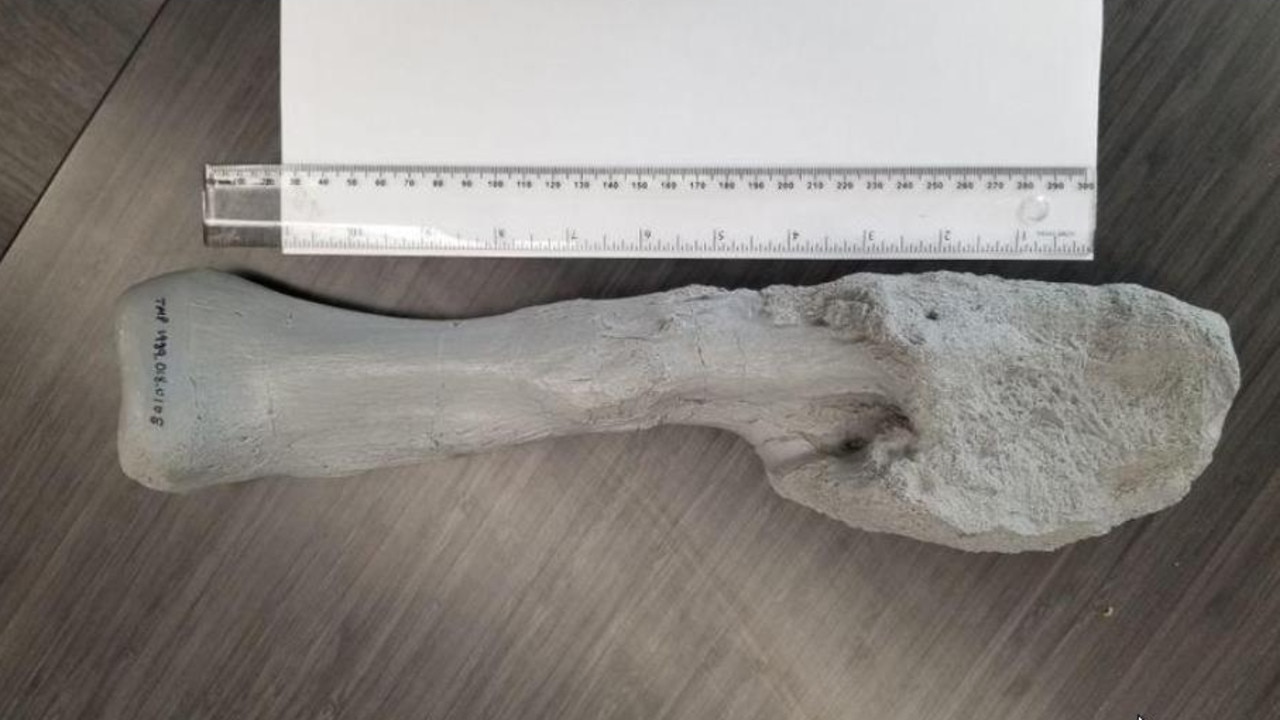 A cast of the fibula bone of the back leg of a Centrosaurus. The big mass on the right is the cancerous tumour. Picture: Reuters

We now know for sure that dinosaurs got cancer, too.

When scientists first unearthed fossils of a horned dinosaur called Centrosaurus in the Dinosaur Provincial Park in Canada’s Alberta province in 1989, they spotted a badly misshapen leg bone they thought was a healed break.

A fresh examination, researchers said this week, shows something different. The malformation* was a type of bone cancer — called an osteosarcoma — making this Centrosaurus, which lived 76 million years ago, the first known example of a dinosaur afflicted by malignant* cancer.

Centrosaurus was a four-legged, beaked, plant-eating Cretaceous Period dinosaur about 6m long, with a long horn above its nose, a bony frill above its neck and with two smaller hooked horns. 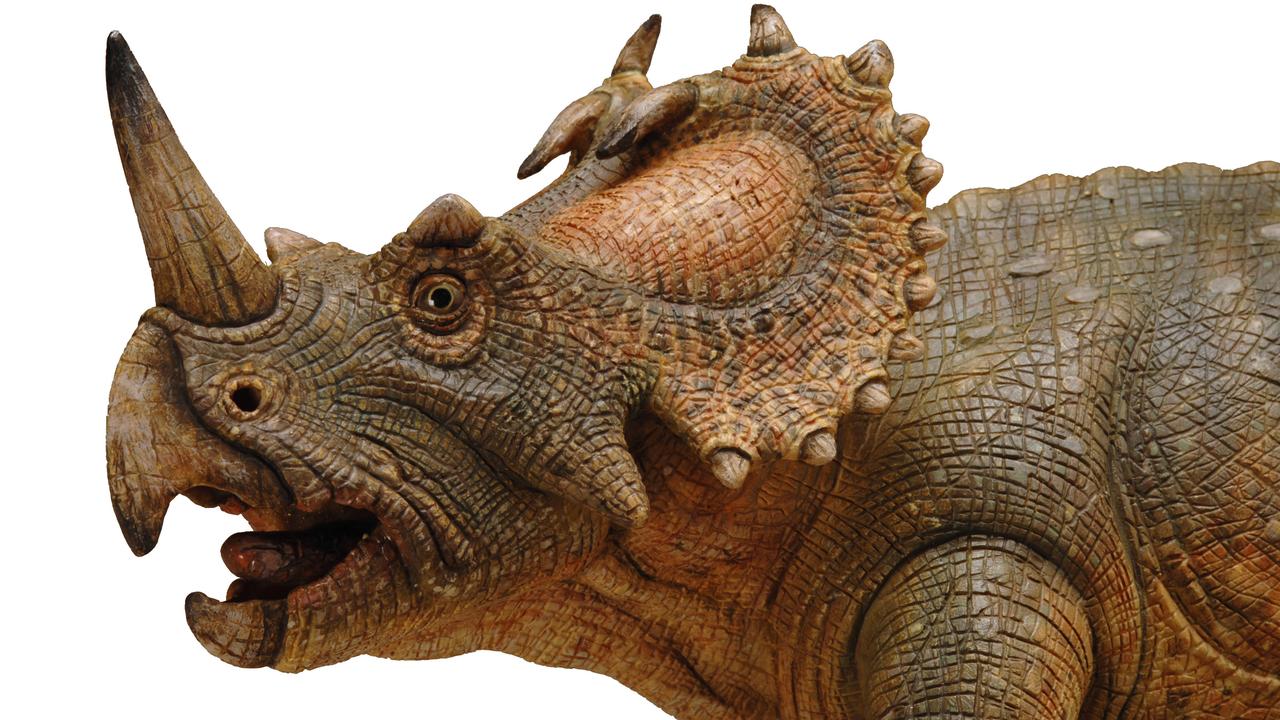 Centrosaurus was a four-legged, plant-eating Cretaceous Period dinosaur about 6m long, with a long horn above its nose and a bony frill above its neck. Picture: Australian Museum

The Centrosaurus fibula, a lower leg bone, contained “a massive gnarly* tumour larger than an apple,” said palaeontologist* David Evans of the Royal Ontario Museum in Toronto, Canada, one of the researchers in the study published in the journal Lancet Oncology*.

“This particular Centrosaurus was likely weak and lamed* by the cancer prior to its death. This remarkable find shows that no matter how big or powerful some dinosaurs may seem, they were affected by many of the same diseases we see in humans and other animals today, including cancer. Dinosaurs seem like mythical beasts, but they were living, breathing animals that suffered through horrible injuries and diseases,” he said.

Because most tumours occur in soft tissue that does not often fossilise, there is very little evidence of cancer in the fossil record.

This find tells experts something very important about cancer.

“It is not something novel or new, but probably has occurred since time immemorial* and is an expected complication in all animals,” said study co-author Dr Mark Crowther, a professor at McMaster University in Ontario, Canada.

“Osteosarcoma generally occurs in rapidly growing bones and as such is found in children and young adults. Presumably dinosaurs were also at risk because of the fact that they grew at enormous rates,” Dr Crowther added.

The tumour destroys the bone and can spread to other tissues, Dr Crowther said.

In people, treatment consists of chemotherapy* and surgery. The cancerous bone of the Centrosaurus on the left, compared to a healthy bone on the right. The cross-sections helped the scientists understand that it was cancer. Picture: Royal Ontario Museum/McMaster University via Reuters

The researchers confirmed it was a tumour using CT* scans and by looking at thin sections of it under the microscope.

“We were not only able to demonstrate that the bone tissue showed the hallmarks* of osteosarcoma, but that the tumour spiralled through the cortex* of bone, discounting its original identification of a healed fracture*,” Dr Evans said.

Cancer, however, may not have killed the Centrosaurus. Its body was found in a vast* bonebed containing the remains of hundreds of Centrosaurus individuals, suggesting they died as part of a herd caught in a flood, he said. The fossilised cancer tumour of the centrosaurus was found at Badlands at Dinosaur Provincial Park in Alberta, Canada, a world-heritage site. Picture: Lauren McMenemy

Its cancer may have reduced its mobility* to make it an inviting target for big predators like Gorgosaurus and Daspletosaurus. But living within a large herd, Dr Evans said, may have provided safety in numbers that enabled the Centrosaurus to avoid being caught by predators as the cancer progressed. 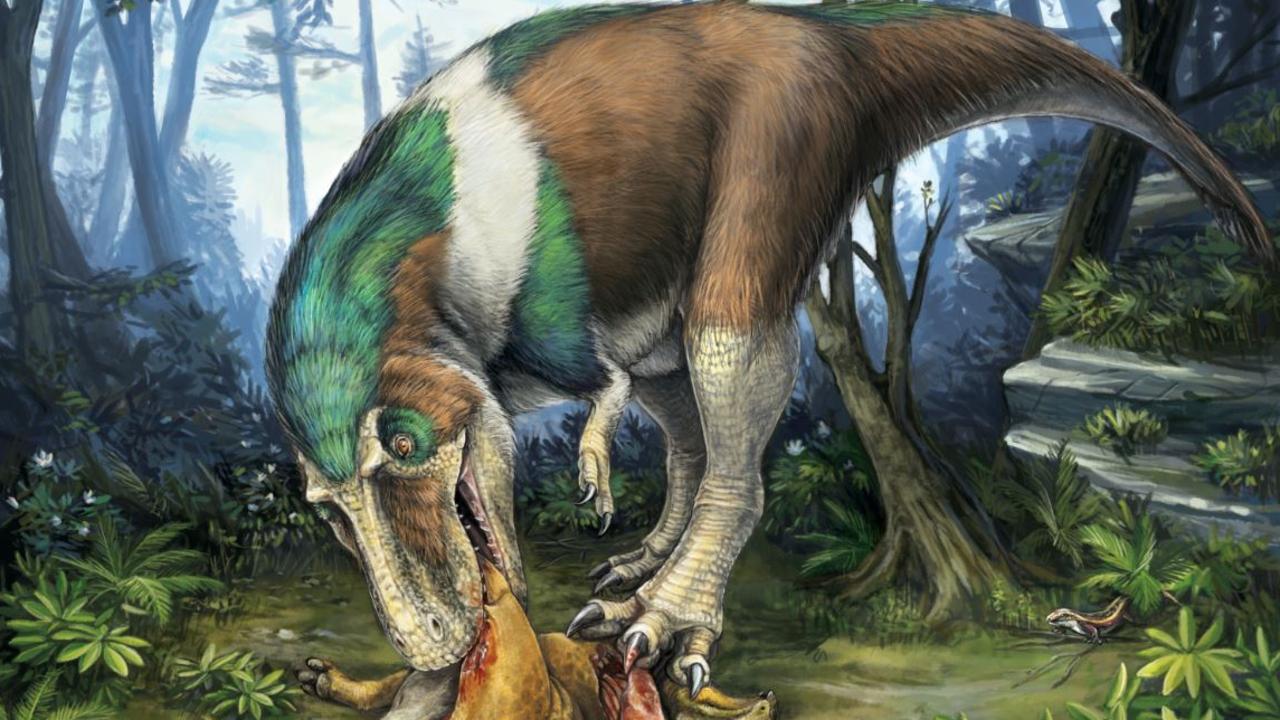 An artist’s illustration of a gorgosaurus tearing apart a corythosaurus in Canada 75 million years ago. Gorgosaurs would have preyed on centrosaurus. Picture: Danielle Dufault

WHAT IS CANCER?
Cancer is a disease of the cells of animals. Cells are the building blocks of living things.

Cancer happens when abnormal cells grow in an uncontrolled way.

Sometimes cancer cells break off the primary tumour (a group or lump of cancer cells), enter the bloodstream or lymphatic* system, and travel to a new organ to form secondary tumours.

Scar found on fossil of feisty dinosaur with feathers

CLASSROOM ACTIVITIES
1. Thinking about facts
In this article we find two different types of information — facts that the scientists know are definitely true and inferences that the scientists believe to be true based on the evidence but cannot determine with 100 per cent certainty. Identify 3 examples of definite facts from the story and explain why scientists can know this for sure. Then identify three inferences and explain why scientists think this but cannot be certain.

2. Extension
Find as many clue words or phrases in the article as you can that help us know whether particular information is fact or inference. (For example: “for sure”; “probably”; etc.)

HAVE YOUR SAY: What would you like to know about dinosaurs?
No one-word answers. Use full sentences to explain your thinking. No comments will be published until approved by editors.