The diamond with another diamond loose inside. Picture: Siberian Times

Miners have unearthed an ultra-rare diamond with a second diamond inside it.

The inner gem is loose inside the first diamond, moving around freely — and could be the first example of such a diamond ever found in the world.

This rare gem is believed to have formed around 800 million years ago.

It was dug up by Russian diamond mining company Alrosa at the Nyurba mine in Siberia, Russia. There are many large diamond mines in Siberia, Russia. This one is at Nakyn, near Mirny. Picture: AFP

Scientists then used X-rays and other scanning techniques to confirm there was a second diamond inside the first.

The scientists have a theory about how the two diamonds formed, according to a statement by the mining company.

“According to them, there was an internal diamond at first, and the external one was formed during the subsequent* stages of growth,” Alrosa said.

The gem has been named the Matryoshka diamond, after the Russian nesting dolls of the same name. The diamond has been named the Matryoshka diamond, after the Russian nesting dolls.

A carat is the unit of weight for diamonds, other gems and pearls. One carat is equal to 200 milligrams, or 0.2g.

“As far as we know, there has been no such diamond in the history of global diamond mining,” said Oleg Kovalchuk, of Alrosa.

“This is really a unique creation of nature.

“Usually, in a case like this, the minerals would be replaced by others without forming a cavity.

“The most interesting thing for us was to find out how the air space between the inner and outer diamonds was formed,” he said.

The diamond will now be sent to the Gemological Institute of America for more testing.

Researchers haven’t valued it yet — it will be difficult due to the gem’s rarity, they said.

However, they do have one theory as to how it formed.

“A layer of porous polycrystalline diamond substance was formed inside the diamond because of ultra-fast growth,” the Alrosa scientists explained.

“And more aggressive mantle (the interior of the Earth) processes subsequently dissolved it.

“Due to the presence of the dissolved layer, one diamond began to move freely inside another — just like a Matryoshka nesting doll.” 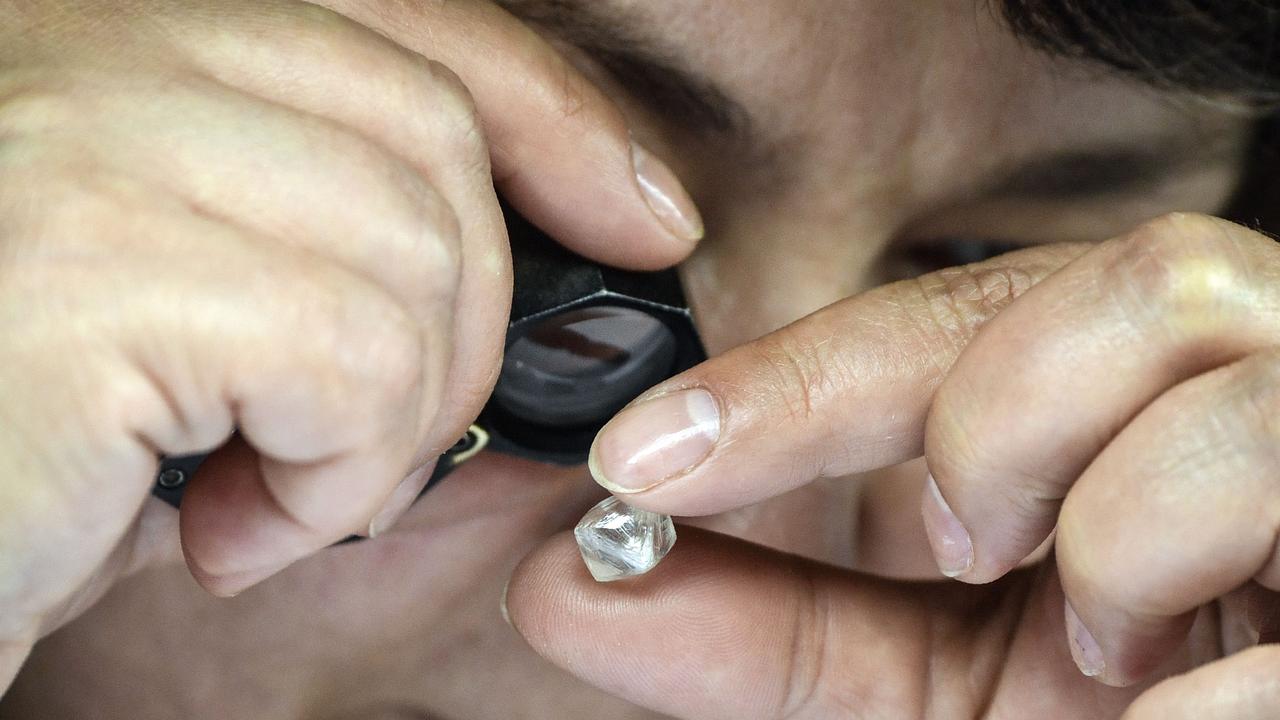 A diamond expert inspects rough (unpolished) diamonds in the Alrosa diamond sorting centre in Siberia, Russia, where the diamond was found. Picture: AFP

ABOUT DIAMONDS
Diamonds are very valuable. How much each is worth depends on how pure, perfect and large it is.

Most of the diamonds in engagement or wedding rings you are likely to see people wearing are about 1-2 carats.

Diamond is a solid form of a pure substance called carbon.

Graphite, the grey writing bit of many greylead pencils, is also pure carbon.

Lots of other things have a lot of carbon in them, such as trees (and wood and paper), people and cotton fabric.

In diamonds, the atoms* of carbon are arranged in a very strong crystal structure that makes a diamond extremely hard to break or scratch.

In graphite, the atoms of carbon are arranged in layers, so that when you drag a pencil on a piece of paper, a layer of carbon atoms comes off onto the paper.

Natural diamonds are mostly between 1 billion and 3.5 billion years old and form more than 100km underground.

Many diamonds are carried to the surface in volcanic eruptions, making them easier to find.

It is possible for experts to make a synthetic* diamond by heating carbon to very high temperatures and putting it under high pressure, or squashing it, but it’s not something you should try doing yourself and it will not work at home. 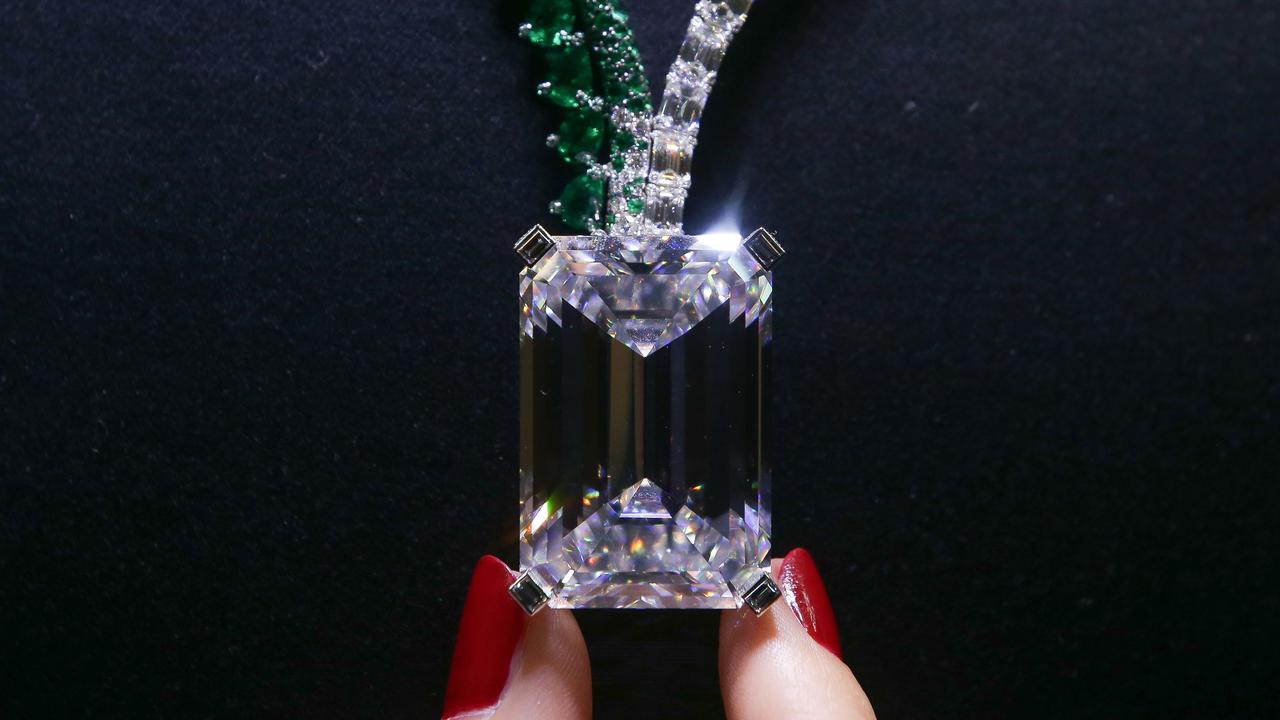 This famous necklace, known as Creation I, features a 163.41 carat diamond and, when it was up for sale in 2017, was the largest diamond ever offered at auction. Picture: AFP

This article was originally published in The Sun and is republished here with permission.

CLASSROOM ACTIVITIES
1. The value of a diamond
Although the researchers haven’t valued this diamond yet, there is information in the article that can help you work out how much it may be worth (not accounting for its rarity). You need to know how many carats the two diamonds are, and how much each carat is worth.

Use the information in the article to come up with an estimate for how much this diamond may be worth. As you don’t know the quality of the diamond you will need to come up with two figures that the value may lie somewhere between (For example: This diamond will be worth between _____ and _____.)

Now add an amount for the rarity of the diamond. (You can determine this, but have a good reason for picking this figure.) What range do you think this diamond’s value is?

If you had the money, would you spend this much on a diamond? Write a short paragraph explaining why you would or wouldn’t purchase this diamond. If you would purchase it, what would you do with it?

2. Extension
The article states that both diamonds and graphite (the writing part inside many greylead pencils) are made of pure carbon. Is that where the similarities end?

Draw up a chart to compare DIAMONDS and GRAPHITE. Compare how they are formed, their structure, how long they take to form, what they are used for and the value of them. You can include anything else you feel in interesting.

You will find some information in the article, but you may need to complete extra research to help you. Place an asterisk next to any points that are the same for both diamonds and graphite.

VCOP ACTIVITY
A Diamond in the Rough
You may have heard this saying from Aladdin. It means a rare beauty or good heart in among a lot of bad. Sometimes it can feel a little like the world is pretty rough and getting you down, but then someone does something kind and genuine and lifts you up. They are your diamond in the rough, rare and beautiful.

But maybe there was a day that was just a bit awful, and someone did something (little or big) to make it not so bad.

A want you to nominate your Diamond in the Rough for a Kindness Award.

Write a nomination about how you were feeling, why and what they did to make you feel better.

Feel free to share your stories. But if you don’t want to, or want to keep parts of it a secret, you can write as if you watched it happened and change characters’ names. That’s OK too.

HAVE YOUR SAY: If you found this diamond, what would you do with it or the money you got from selling it?
No one-word answers. Use full sentences to explain your thinking. No comments will be published until approved by editors.