The glowing dolphins swimming through algae in California, US. Picture: Still from a video by Patrick Coyne

Glowing dolphins have been seen surfing through bioluminescent* algae.

Photographer Patrick Coyne was lucky enough to see the dancing dolphins with his own eyes and shared video on social media so we can all witness the stunning scene.

Coyne first learned about the dolphin phenomenon* on TV.

He then went on a local nightly tour off the coast of California’s Newport Beach in the US until he managed to see the rare sight himself.

Coyne wrote on Instagram: “We were out for a few hours and on our final stretch back we finally had 2 Dolphins pop up to start the incredible glowing show.

“A few minutes later and we were greeted by a few more which was insane. I’m honestly still processing this all …”

The photographer also explained it was quite tricky videoing the event and he relied on a bit of luck and perfect conditions.

ABOUT BIOLUMINESCENCE
Some animals, fungi and microbes (such as bacteria) can glow.

They do this because a natural chemical reaction happens that releases energy in the form of light.

Many marine creatures are bioluminescent, such as some jellyfish, fish, sea stars, sharks and algae. Fireflies are also bioluminescent.

Glowing waves like those the dolphins danced through were seen along Southern California beaches this month and were caused by microscopic* organisms called dinoflagellates, which are a type of plankton. Not all dinoflagellates glow, but those that do are thought to have evolved this way to startle and scare off predators. 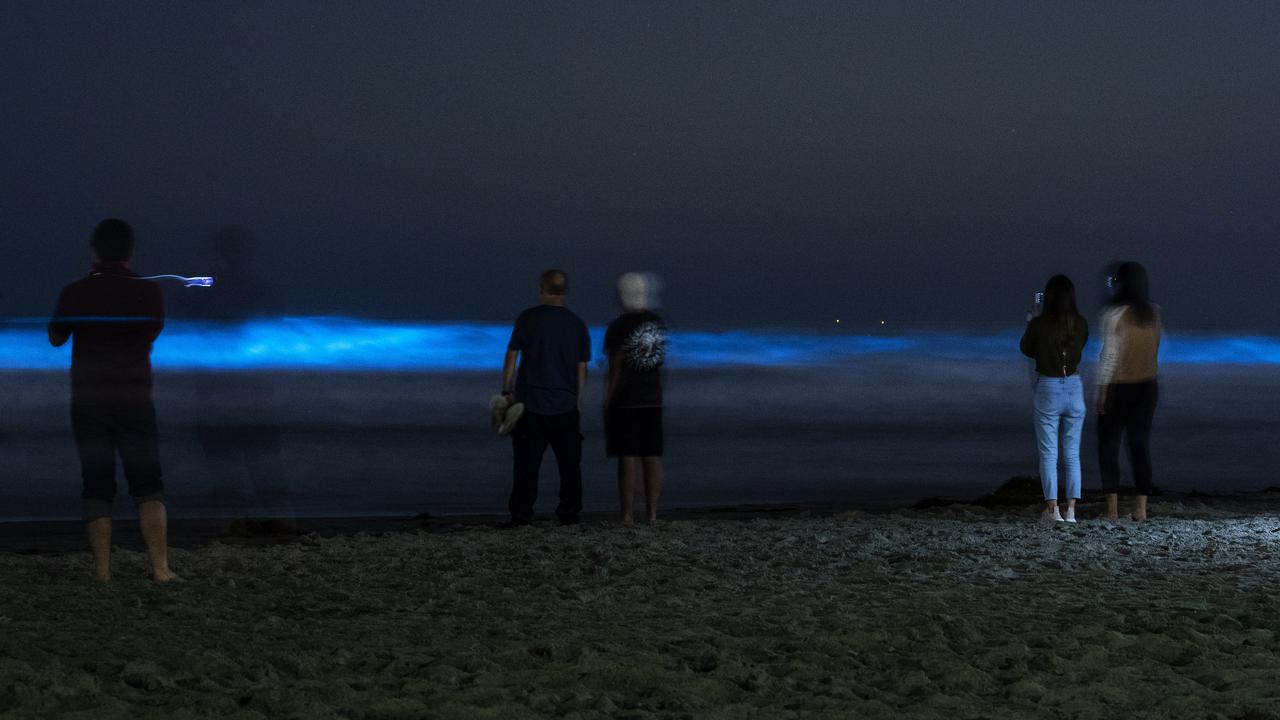 People watching waves glow with blue bioluminescence from an algae bloom in the Pacific Ocean on a beach at San Diego, California, US on April 27, 2020, in San Diego. Picture: AP

There are no naturally occurring bioluminescent plants.

Results of the research by a company called Planta were released this week.

Glowing plants could be used to help scientists study the inner workings of plants and how they respond to stresses such as extreme temperatures, drought or pests. 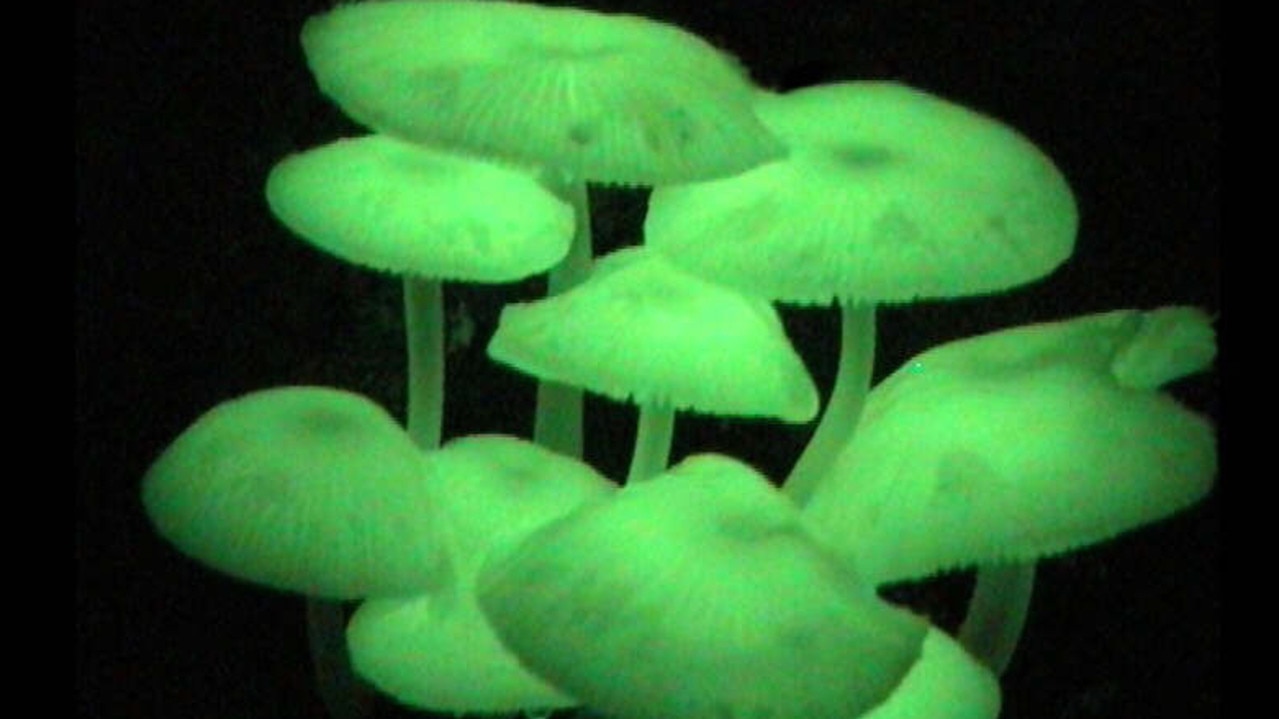 Fungi such as these Mycena lampadis mushrooms are bioluminescent. Picture: Garry Maguire

DOLPHIN FAST FACTS
There are 36 dolphin species and they can be found in every ocean and some freshwater rivers.

They are aquatic carnivorous* mammals that mostly eat fish and squid.

Orcas are the largest dolphin species.

Dolphins are social animals that live in pods of about 12 and play and communicate with each other constantly. They can sometimes form massive pods if required, such as to avoid predators. A squad or super pod of dolphins. Picture: iStock

They use echolocation* to navigate the ocean and find prey, which involves creating sound waves to bounce off objects so they can work out things like sizes of objects and distance.

Mushrooms light up the night

CLASSROOM ACTIVITIES
1. Bioluminescent Art
Create a visually spectacular art piece of an underwater scene with the bioluminescent element. It could be the dolphins lighting up or other sea creatures mentioned in the Kids News article. You could use whatever materials you have available at home such as paint, crayon, texta and the glowing aspect could be done with glitter, foil or any other shiny material.

2. Extension
Work with a partner and brainstorm some other ideas that scientists could work on using bioluminescent mushrooms to make things glow. What would you like to glow in your backyard?

HAVE YOUR SAY: What would you like to see glowing? Why?
No one-word answers. Use full sentences to explain your thinking. No comments will be published until approved by editors.