The area surrounding the Banda Sea off Indonesia where the impact of the earthquake was felt. The top of Australia can be seen at the bottom of the image.

A massive earthquake has struck off the coast of Australia, causing buildings in Darwin and the Northern Territory to shake and people to flee* into the streets.

The US Geological Survey said an earthquake reaching magnitude* 7.2 occurred in the Banda Sea off Indonesia — which sits above the Northern Territory — about 11am on Monday.

The quake, which was at a depth of 213km underground, caused tremors in Darwin for about five minutes.

Buildings shook and several hotels and businesses told staff to leave and wait outside in the central business district.

The Joint Australian Tsunami Warning Centre was quick to assure* residents the mainland was not at risk of being hit by a tsunami* because the quake “was too deep inside the earth”.

A group of nurses at Royal Darwin Hospital started praying when the shaking started.

Health researcher Isabella Marovich, who was at Royal Darwin Hospital at the time, said staff, nurses and patients had been evacuated* from the hospital.

“I could see the awnings on the hospital building shaking,” she said.

Robyn Williams was home at Parap when she felt the quake for almost two minutes.

“The whole house was shaking and the TV was moving a hell of a lot,” she said.

“I’ve never felt anything like it — it was quite unnerving*.”

Local resident Brian Piddick said: “I’m on one of those office chairs that swivels up and down, and I thought, ‘Geez I’m not moving, it’s the ground’,” he said.

“What’s going on with the world?” Patrons at Harbour View Hotel were evacuated during the earthquake. Picture: Supplied

Rosebery resident Michael O’Brien said it came at an awkward time for him.

“I’m a little bit shocked. I was sitting on the loo and the loo started to vibrate and I thought ‘what the hell’s going on here’,” he said.

“Is there really any good time for it to come?”

NT Government worker Alfredo Borges said it had given him a shock.

“My desk and my chair was moving for a long period of time,” he said.

“I’m on level four and over the past year we’ve had minor tremors, not like this one. The opposite building to us (swayed) and then people started evacuating.”

He said he didn’t hesitate to leave when he felt the tremor.

“You go through cyclones and all that but it’s (an earthquake) a totally different ball game because it’s uncontrollable and it happens on short quick notice, no one picks it, it’s just a different feel.” 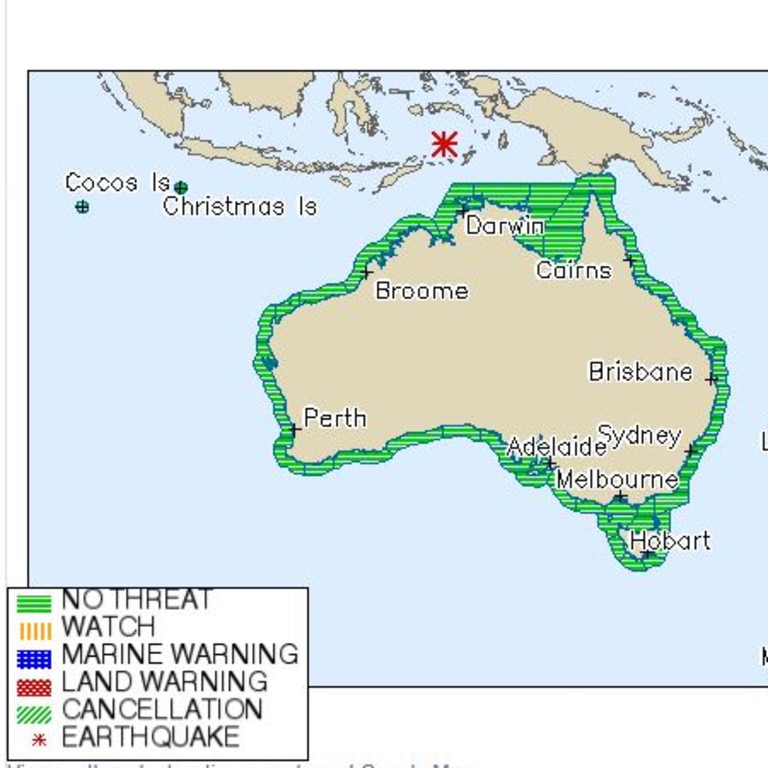 The Joint Australian Tsunami Warning Centre quickly advised there was no risk of a tsunami hitting Australia’s shores.

Residents have also reported feeling the tremors 300km south of Darwin in Maningrida and Katherine.

Engineers were inspecting buildings yesterday for any serious damage.

St John’s Ambulance said there were no reports of injuries. This hut sits on top of an earthquake fault line in the Philippines. Picture: Chris Ramasola

WHAT IS AN EARTHQUAKE?
Earthquakes are the vibrations caused by rocks breaking under stress. The underground surface along which the rock breaks and moves is called a fault plane or fault line.

When the rock breaks it releases seismic energy in waves, which causes the earth to shake.

Fortunately, smaller earthquakes occur much more frequently than large ones and most cause little or no damage.

The focus of an earthquake is the point where it originated within the Earth. The point on the Earth’s surface directly above the focus is called the earthquake epicentre.

Earthquakes: How do they occur?

HOW DO YOU MEASURE AN EARTHQUAKE?
Geoscience Australia monitors, analyses and reports on significant earthquakes to alert the Australian Government, State and Territory Governments and the public about earthquakes in Australia and overseas.

Earthquakes are detected by scientific machines called seismometers or seismographs. The word seismo originates from the Greek word seismos, which means to shake or move violently and was later applied to the science and equipment associated with earthquakes.

Seismographs were used in the past to detect earthquake activity and relied on a mechanical system to record the seismic energy in the Earth as squiggly lines onto paper.

Today, modern seismometers detect and convert any small movement in the Earth into an electrical signal for use in computer systems. An earthquake is measured on a seismometer on March 6, 2009 in Victoria.

CLASSROOM ACTIVITIES
1. Write a headline
The headline of a news story is written to give people an idea of the story. It also should catch people’s attention and make them want to read the story,

Imagine that you are a reporter for Kids News. You have been asked to choose four interesting things in today’s story. Each thing will be turned into a story of its own. Your job is to write an interesting and catchy headline for each story.

VCOP ACTIVITY
Wonderous wow words
After reading the article, with a partner, highlight as many wow words or ambitious pieces of vocabulary you can find in yellow. Discuss the meanings of these words and see if you can say them as part of a new sentence.

HAVE YOUR SAY: After reading the story, describe how you think you’d feel if you were caught in an earthquake.
No one-word answers. Use full sentences to explain your thinking. No comments will show until approved by editors.