A rocket ship built by Elon Musk’s SpaceX company thundered away from Earth with two Americans on Saturday, beginning a new era in commercial* space travel and putting the US back in the business of launching astronauts into orbit from home soil for the first time in nearly a decade.

NASA’s Doug Hurley and Bob Behnken rode skyward aboard a white-and-black, bullet-shaped Dragon capsule on top of a Falcon 9 rocket, lifting off at 3.22 pm local time from the same launch pad used to send Apollo crews to the Moon 50 years ago. Minutes later, they slipped safely into orbit.

The capsule, which the astronauts named Endeavour, docked safely at the International Space Station on Monday morning Australian time.

VIDEO: The astronauts aboard Endeavour before docking at the ISS

The flight was to lift off on Thursday morning Australian time but was rescheduled because of thunderclouds. The SpaceX Crew Dragon capsule on the Falcon 9 rocket before the weather forced the delay of the launch on May 27, 2020. Picture: AFP/NASA TV

NASA astronauts Hurley and Behnken flew to the ISS aboard a SpaceX Dragon crew capsule completely different to NASA’s old Apollo spacecraft. Instead of a mess of switches and knobs inside, for instance, there are touchscreens.

It was the first astronaut launch from Florida, US, since the space shuttle program closed in 2011, and the first US-made capsule to carry people into orbit since the Apollo-Soyuz mission in 1975.

The SpaceX Falcon 9 rocket — with the crew capsule on top — launched from the same pad used for both of those earlier missions.

Russia’s Soyuz capsules, still in use after more than 50 years, have kept NASA astronauts flying to the space station. While reliable, the Soyuz looks dated compared with the sleek Dragon. “We want it to not only be as safe and reliable as you’d expect from the most advanced spacecraft in the world … we also want it to look amazing and look beautiful,” said Benji Reed, a SpaceX mission director.

SpaceX and Boeing, NASA’s other commercial crew provider, opted for capsules from the start.

There was no need for another flying machine like the shuttle, which was built to carry big satellites and space station parts, said retired NASA manager Steve Payne.

“What we’re trying to do now is just taxi service up and down, and you don’t need the huge semi* anymore. You can use a sedan*,” Payne said.

“Yes, wings are nice. They give you more options as to where to land and a little more control,” said Payne, a former Navy fighter pilot. “But they’re not absolutely necessary. And since we’re trying to make this inexpensive and reusable and as simple as we can make it so that it’s cost effective, capsules work.” It means the end of space station missions with old-fashioned splashdowns in the ocean.

The two astronauts were involved in the new capsule’s development over the past five years, offering suggestions to benefit not just themselves but future crews.

“Our goal through this entire process is to not turn the spacecraft into Bob and Doug’s excellent machine, with a bunch of things that only Doug likes or only Bob likes,” Behnken said.

Although the fully automated Dragon has four seats lined up in a row, only the centre two were occupied for this especially risky test flight. A test dummy soloed on last year’s Dragon crew capsule debut. 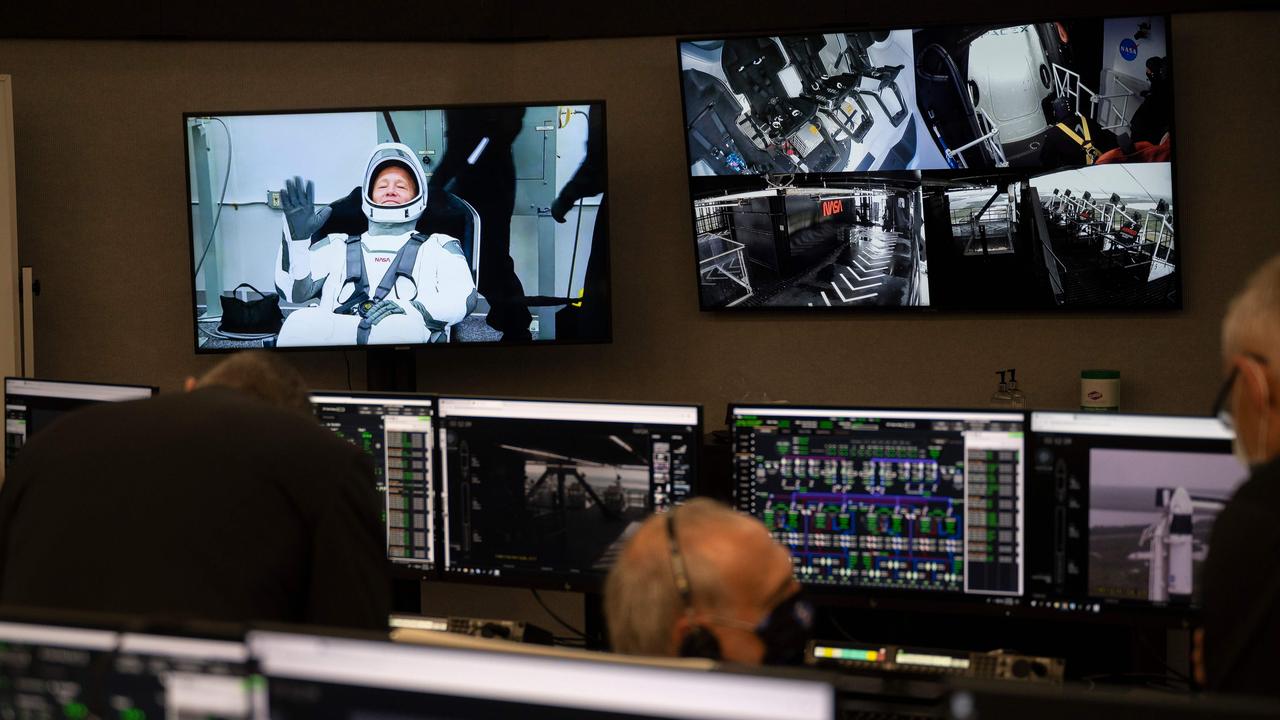 NASA astronaut Douglas Hurley waving on a monitor in firing room four during suit-up at the Neil A. Armstrong Operations and Checkout Building during the launch attempt on May 27. Picture: AFP/NASA/Jeff Kowsky

CLASSROOM ACTIVITIES
1. Name the Capsule
The name of the SpaceX crew capsule was announced on launch day as Endeavour. What do you think would have been a great name for the capsule? Choose a name and write a paragraph explaining why your name should have been used.

2. Extension
Do you agree with Benji Reed that it is just as important for a spacecraft to ‘look amazing’ as it is to be safe and reliable? Write a persuasive text that answers this question.

VCOP ACTIVITY
3, 2, 1, Takeoff?
Write a commentary either for the cancelled launch or for the actual launch.

Explain in exciting detail the lead up to the launch, the flight checks, the astronauts getting ready and buckled in etc.

If you choose the cancelled launch, don’t forget to mention the weather slowly getting worse throughout the preparations.

HAVE YOUR SAY: Would you like to be an astronaut?
No one-word answers. Use full sentences to explain your thinking. No comments will be published until approved by editors.