Astronomers find closest black hole to Earth yet, ‘just around the corner’ Illustration of the orbits of the objects in the HR 6819 triple system. The group is made up of an inner star, orbit in blue, and a newly discovered black hole, orbit in red, as well as a third star in a wider orbit, blue. Picture: ESO/AP

Astronomers have found the closest black hole to Earth yet.

It is so close that two stars dancing with it can be seen without a telescope.

Close can still mean a long, long way away when you’re talking about space.

This black hole is about 1000 light-years away and each light-year is 9.5 trillion kilometres.

But in terms of the entire universe and even our home galaxy, it is “just around the corner”, said Chile-based European Southern Observatory astronomer Thomas Rivinius, who led the study published Wednesday in the journal Astronomy & Astrophysics.

The previous closest black hole is probably about three times further away from Earth, about 3200 light-years, he said.

The discovery of this closer black hole, which is in the constellation Telescopium in the Southern Hemisphere, hints that there are more of these out there. Astronomers estimate there are between 100 million to 1 billion of these small but dense objects in the Milky Way.

Unfortunately, we can’t see them. Nothing, not even light, escapes a black hole’s gravity. Usually, scientists can only spot them when they’re gobbling up sections of a partner star or something else falling into them. 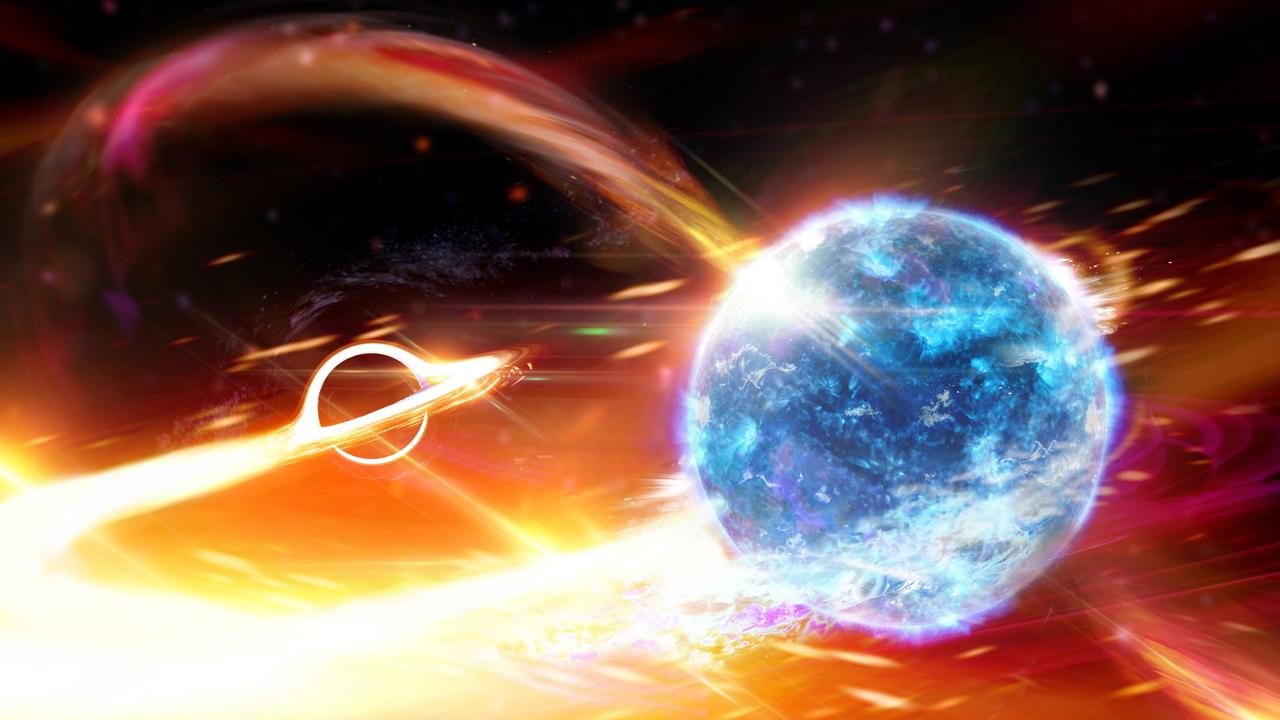 Artist’s impression of what it could look like if we saw a black hole about to swallow a neutron star. Picture: Carl Knox, OzGrav ARC Centre of Excellence

Astronomers think most black holes, including this newly discovered one, don’t have anything close enough to swallow. So they go undetected.

Astronomers found this one because of the unusual orbit of a star. The new black hole is part of what used to be a three-star dance in a system called HR6819. The two remaining super-hot stars aren’t close enough to be sucked in, but the inner star’s orbit is warped*.

Using a telescope in Chile, they confirmed that there was something about four or five times the mass of our Sun pulling on the inner star. It could only be a black hole, they concluded.

Astronomers not part of the study team said that makes sense.

“It will motivate additional searches among bright, relatively nearby stars,” said Ohio State University astronomer Todd Thompson, who wasn’t part of the research.

Like most of these type of black holes this one is tiny, maybe 40km in diameter.

“Washington, D.C. (the capital city of the US) would quite easily fit into the black hole, and once it went in it, would never come back,” said astronomer Dietrich Baade, a study co-author.

These are young, hot stars compared to our 4.6 billion-year-old Sun. They’re maybe 140 million years old, but at 15,000C, they are three times hotter than the Sun, Rivinius said. About 15 million years ago, one of those stars got too big and too hot and went supernova*, turning into the black hole in a violent process, he said.

“It is most likely that there are black holes much closer than this one,” said Avi Loeb, director of Harvard’s Black Hole Initiative, who wasn’t part of the study. “If you find an ant while scanning a tiny fraction of your kitchen, you know there must be many more out there.” A computer-simulated image shows gas from a star that has been shredded by a black hole falling into the hole (at the upper left of the diagram), while other gas is shot out into space in a long, drawn-out stream. Picture: NASA/S Gezari (JHU)/J Guillochon (UCSC)

WHAT HAPPENS NEXT?
Black holes are extremely dense objects with gravitational pulls so powerful not even light can escape.

This black hole has not yet swallowed its two partner stars.

“The formation of a black hole is a violent process, and most models would not have predicted a triple system could survive that but rather would fly apart,” Rivinius said.

The black hole forms a pair with one of the two stars, as near to one another as the Earth is to the Sun. The other star is much further away, orbiting the pair. This star spins so rapidly that it is misshapen, bulging at the equator.

The two stars are sufficiently distant from the black hole that it is not pulling material from them. But in a few million years the closer star is expected to grow in size as part of its life cycle.

“What happens then is uncertain,” Rivinius said. “The most spectacular outcome would be if the black hole ends up with that star inside it.” An artist’s impression of the material circling a supermassive black hole at the heart of the spiral galaxy NGC 3147, located 130 million light-years away. Picture: AFP/ESA/Hubble

CLASSROOM ACTIVITIES
1. Create a Flow Chart
Create a flow chart or other kind of diagram that will help younger kids understand how and why black holes form in space.

2. Extension
Why do you think that stars ‘dance’ with a black hole? What do you think is really happening? Give reasons for your answer.

HAVE YOUR SAY: Share the coolest thing you know about black holes.
No one-word answers. Use full sentences to explain your thinking. No comments will be published until approved by editors.