China launches mission to the Moon China launched a mission on Tuesday to bring back rocks from the Moon’s surface for the first time in more than 40 years.

Chang’e 5 — named for the Chinese moon goddess — is the country’s boldest lunar mission yet. If successful, it would be a major advance for China’s space program, and some experts say it could pave the way for bringing samples back from Mars or even a crewed lunar mission.

The four modules* of the Chang’e 5 spacecraft blasted off atop a massive Long March-5Y rocket from the Wenchang launch centre along the coast of the southern island province of Hainan, China.

Minutes after lift-off, the spacecraft separated from the rocket’s first and second stages and slipped into Earth-Moon transfer orbit. About an hour later, Chang’e 5 opened its solar panels to provide power.

The launch was shown live by Chinese national broadcaster CCTV, which then switched to computer animation to show its progress into outer space.

The mission’s main task is to drill 2m beneath the Moon’s surface and scoop up about 2kg of rocks and dust, according to NASA. That would offer the first opportunity for scientists to study newly obtained lunar material since the US and Russian missions of the 1960s and 1970s. NASA astronaut Harrison Schmitt collects lunar rock samples at the Taurus-Littrow landing site on the Moon during the Apollo 17 mission in 1972. Picture: AFP/NASA

The Chang’e 5 lander can only stay on the Moon for one lunar daytime — or about 14 Earth days — because it can’t withstand the Moon’s freezing nights.

The lander will dig for materials with its drill and robotic arm and transfer them to what’s called an ascender*, which will lift off from the Moon and dock with the service capsule. The materials will then be moved to the return capsule to be brought back to Earth.

Joan Johnson-Freese, a space expert at the US Naval War College, said it is a technically complex mission that other countries will study if they attempt to collect samples from asteroids or even Mars. 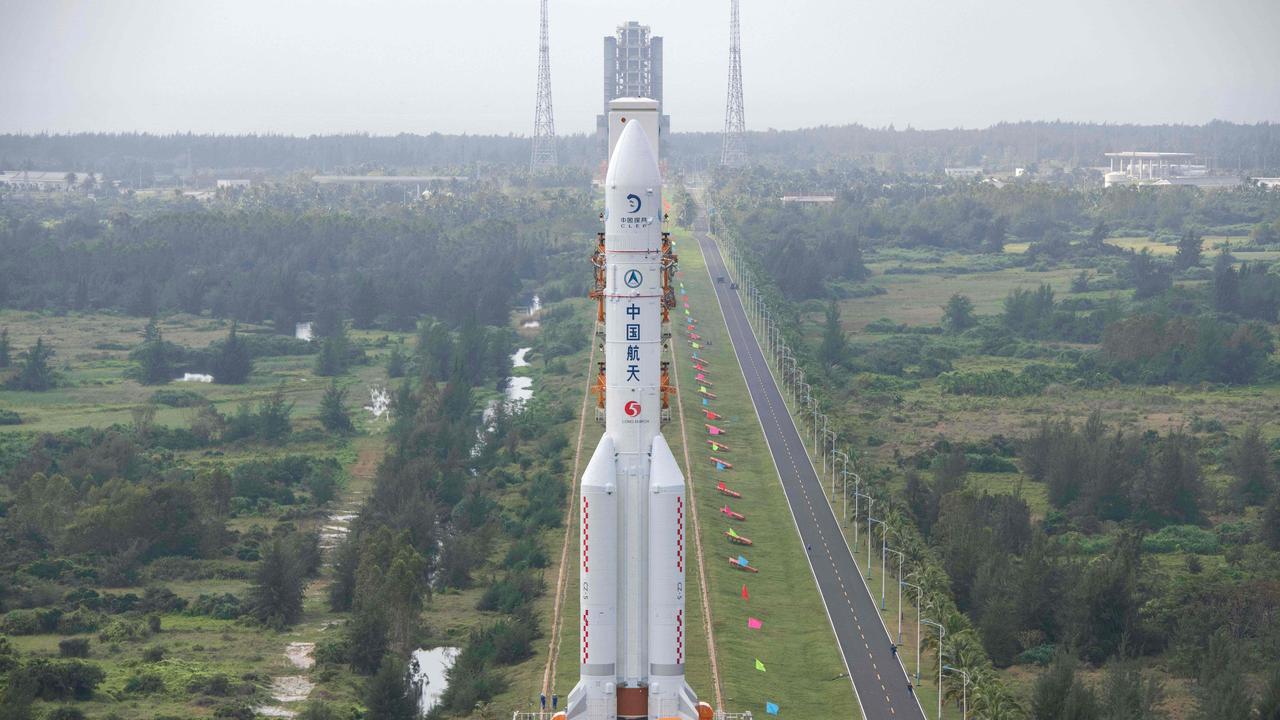 Jonathan McDowell, an astronomer at the Harvard-Smithsonian Center for Astrophysics, said that while it is a challenging mission, China has already landed twice on the Moon with its Chang’e 3 and Chang’e 4 missions, and showed with a 2014 Chang’e 5 test mission that it can navigate back to Earth, re-enter and land a capsule. All that’s left is to show it can collect samples and take off again from the Moon.

“As a result of this, I’m pretty optimistic that China can pull this off,” he said.

China put a person in space in 2003, only the third nation to do so after the US and Russia.

And while many of China’s space achievements reproduce those of other countries, the CNSA is now a space pioneer.

Chang’e 4 — which made the first soft landing on the Moon’s relatively unexplored far side almost two years ago — is currently collecting full measurements of radiation exposure from the lunar surface, information vital for any country that plans to send astronauts to the Moon.

China in July became one of three countries to have launched a mission to Mars, in China’s case an orbiter and a rover that will search for signs of water on the red planet. The CNSA says the spacecraft Tianwen 1 is on course to arrive at Mars around February. A Long March 5 rocket being transferred before the launch of a Mars rover in Wenchang in China’s southern Hainan province on July 23, 2020. Picture: STR/AFP

The European Space Agency will be providing important ground station information for Chang’e 5. US law, however, still prevents most collaborations* with NASA, which also excludes China from partnering with the International Space Station. That has prompted China to start work on its own space station. Hunt is on for missing Moon rocks

Race is on to reach the red planet

CLASSROOM ACTIVITIES
1. Scientific Report
Write a creative scientific report on the lunar rocks brought back from the Moon and the information it may have provided to scientists. You can be scientific and predict possible things, or you can be as creative or humorous as you like. Fill out the proforma below to complete the scientific report.

SCIENTIFIC REPORT ON LUNAR ROCKS BROUGHT BACK FROM THE MOON

AIM: To examine the lunar rocks brought back from the Moon to see what information they can provide us with.

APPARATUS: (What equipment was used)

METHOD: (What was done)

RESULTS: (What you found out)

2. Extension
List some of the disadvantages of US law preventing NASA from sharing information with other countries. What might they gain if they collaborate with other space agencies around the world?