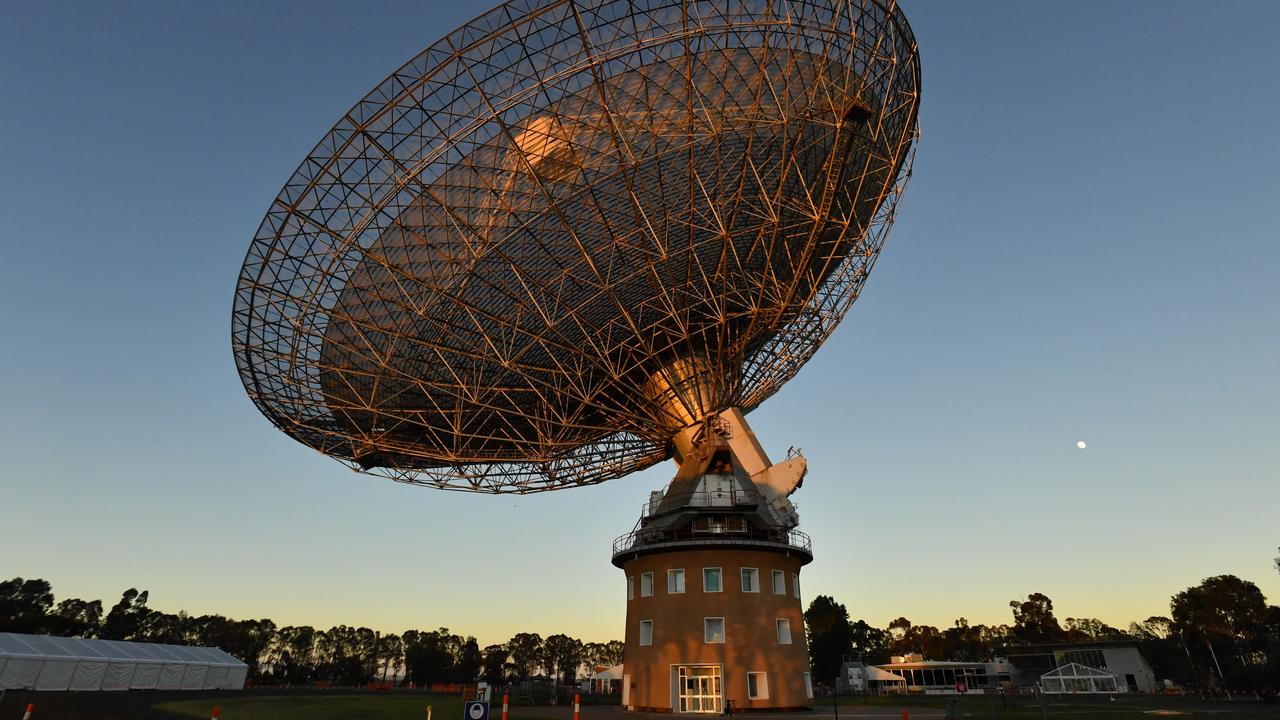 The CSIRO Parkes Observatory in NSW, which detected the first Fast Radio Bursts in 2007 using information gathered in 2001. Picture: AAP

More mysterious radio bursts have made it to Earth from a galaxy three billion light-years* away.

But researchers still don’t know what they are and why they’re coming here.

Fast Radio Bursts (FRBs) were first detected by Australian radio astronomers at the Parkes Telescope in 2007 using information gathered in 2001.

FRBs are a flare of electromagnetic energy*, with the intensity of tens of millions of suns. A solar flare flashes on our Sun on September 10, 2017. Each Fast Radio Burst is a flare of energy with the intensity of tens of millions of suns. Picture: NASA/GSFC/SDO

FRB 121102 was one of the first discovered and the first to be assigned to a particular place of origin, attracting attention after scientists noticed it was responsible for repeated bursts.

Earlier this year, astronomers studying FRB 121102 were stunned to discover that not only were the radio bursts repeating, they could even figure out when they were likely to occur again.

Now it seems the FRB is following a cycle of between 156 and 161 days, in which the source of the bursts is silent for around 67 days, then a further 90 days when it wakes up and starts sending the radio signals again.

The short chirps are only around a millisecond* long.

Earlier this year astronomers reported FRB 180916 was operating on a 16-day cycle of radio bursts, where the FRBs would be detected for four days before falling silent for 12.

A new paper from researchers at Germany’s Max Planck Institute for Radio Astronomy catalogues 36 bursts from FRB 121102 between September 2017 and June 2020 to identify July 9 and October 14 of this year as the active period for the source of the mysterious radio bursts. Fast Radio Bursts last just a millisecond but contain as much energy as tens of millions of Suns.

A separate team of researchers at the National Astronomy Observatory of China were also monitoring the area and say the bursts have come from between March and August this year.

On August 17 they reported hearing a dozen bursts that seemed to confirm FRB 121102 was once again active.

The researchers in China arrived at a different conclusion however, suggesting the active period would end between the end of August and September 9.

“Alternatively, if the source is continuously on after the projected turning-off time, it suggests that the putative* period of the source is not real or has evolution*,” research head Pei Wang said in a note on The Astronomer’s Telegram.

“We encourage more follow-up monitoring efforts from other radio observatories,” the researchers wrote.

A population of fast radio bursts at cosmological distances. Video from Swinburne University.

The Aussies, the Dish and a TV world first

CLASSROOM ACTIVITIES
1. What’s the Cause?
What do you think is causing the mysterious radio bursts? Write a report that describes what you think is the cause.

2. Extension
FRB21102 and FRB 180916 are not very exciting names for an amazing and mysterious event. Create interesting new names for them. For each new name, write the reasons why you chose it.

HAVE YOUR SAY: What do you think these signals are?
No one-word answers. Use full sentences to explain your thinking. No comments will be published until approved by editors.