Scientists have found a potentially habitable* exoplanet that is similar to Earth and orbits* a star similar to our Sun.

The promising discovery was made in a nearby solar system and is said to be the most similar planet-star set-up to our own that’s ever been found.

The exoplanet candidate* is called KOI-456.04 and is still being considered for official planet status.

An exoplanet is just a planet that is found in a different solar system to our own and KOI-465.04 was found 3000 light years away.

Scientists are excited about the discovery because the planet candidate is only 1.9 times bigger than Earth.

This means it could have similar atmospheric conditions*.

Most other exoplanet discoveries find planets that are much bigger than Earth and are similar in size to Neptune. 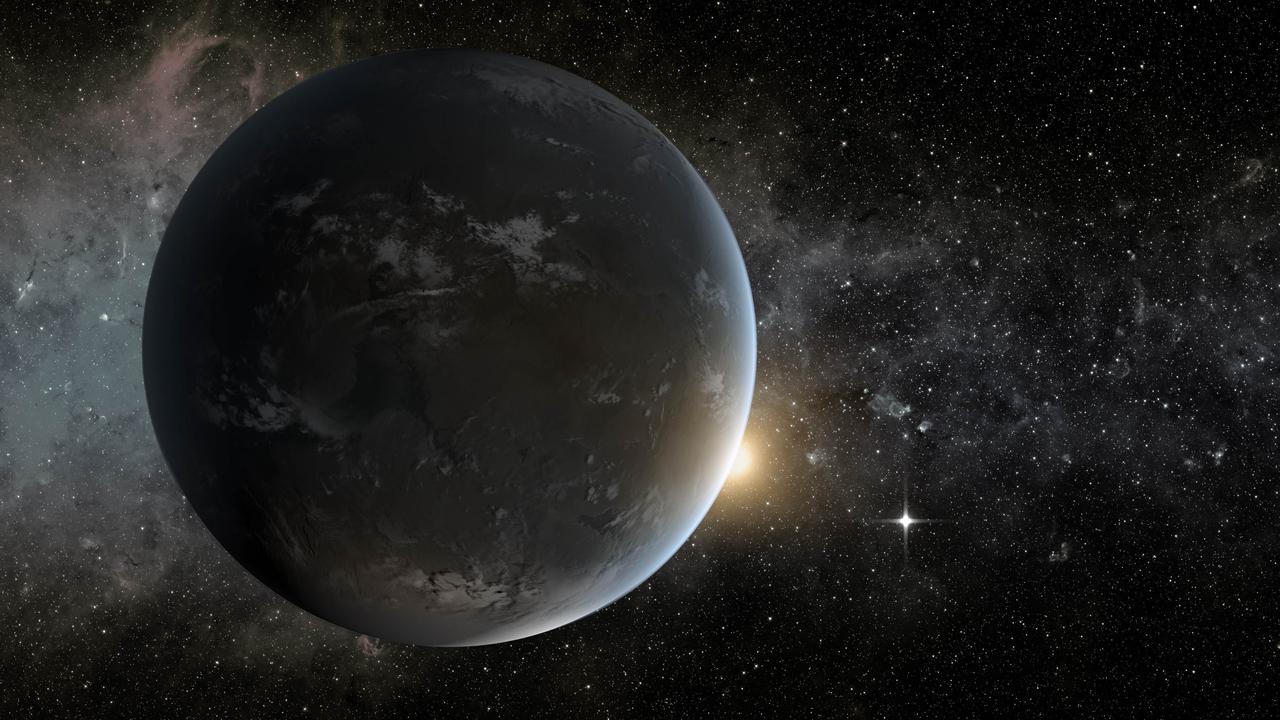 The Kepler-62f exoplanet was discovered in 2013 and is thought to be 40 per cent larger than Earth. Picture: AFP

Rene Heller, the lead author of the new study, said: “It’s the combination of this less-than-double the size of the Earth planet and its solar type host star that make it so special and familiar.”

The fact KOI-465.04 is also a similar distance to its star and that its star is similar to our Sun is promising.

The researchers explained: “Almost all of the Earth-sized planets known to have potentially Earth-like surface temperatures are in orbit around red dwarf stars, which do not emit visible light but infra-red radiation instead.”

This radiation means life is unlikely to survive on the surface.

However, because the Earth-like planet candidate is orbiting a star like the Sun, it could have the right conditions to host life.

SpaceX: The Dragon capsule splashes down in the Atlantic

Kepler-160 is only 1.1 times the size of the Sun and is thought to have a surface temperature of 5200 degrees Celsius, only 300 degrees less than our star.

This also suggests that the orbiting KOI-456.04 could have similar atmospheric conditions to Earth, such as a mild greenhouse effect.

According to the Max Planck Institute researchers, if the planet candidate does have a similar atmosphere then its average surface temperature is likely about 5 degrees Celsius.

To be labelled habitable, a planet must orbit its star at a distance which would support a temperature that can maintain liquid water. An artist’s impression of the Kepler Space Telescope which searched for searched for Earth-like planets in the Milky Way galaxy until it was retired in 2018.

The new discovery was made when researchers re-examined data from the Kepler Space Telescope, which NASA retired in 2018.

If other telescopes can confirm KOI-465.04’s existence then it will join 4000 other known planets outside the Milky Way.

WHAT IS AN EXOPLANET? An artist’s concept of other planetary discoveries made by NASA’s Kepler Space Telescope. Picture: NASA

CLASSROOM ACTIVITIES
1. Picture it
Draw a labelled diagram that shows both KOI-456.04 and Earth, and makes it easy to see their similarities. Consider how to present your diagram so that it gives clear information that is easy to understand. At a minimum, your diagram should show a rough size comparison of the two planets and the stars they orbit around, and the temperatures of each.

2. Extension
Do you think there is life out in the universe, outside of Earth? Do you think it is important for us to know the answer? Write a paragraph to explain your thoughts.

VCOP ACTIVITY
Up-Level It
Scan through the article and see if you can locate three words that you consider to be basic, or low level words we use all the time and that can be replaced by more sophisticated words. Words like “good” and “said” are examples of overused words.

HAVE YOUR SAY: Do you think there is life on planets in other solar systems?
No one-word answers. Use full sentences to explain your thinking. No comments will be published until approved by editors.