Jupiter’s Great Red Spot storm is much deeper than expected NASA’s Juno spacecraft has been successfully capturing unprecedented images of Jupiter since 2016, including this infra-red view of the Southern Aurora of Jupiter taken in August that year. The planet's Southern Aurora can hardly be seen from Earth due to our planet's position in relation to Jupiter's south pole. Picture: NASA/JPL-Caltech/SwRI/ASI/INAF/JIRAM

NASA’s Juno spacecraft is providing a deeper understanding of Jupiter’s wondrous and violent atmosphere including its Great Red Spot, with data finding that this immense swirling storm extends much further down than expected.

Researchers said on Thursday the Great Red Spot plunges between roughly 350 to 500km below the cloud tops on Jupiter, based on microwave* and gravity* measurements taken by Juno.

The solar system’s largest planet is so big that 1000 Earths could fit inside it – and the new data is giving scientists a three-dimensional* account of Jupiter’s atmosphere. This illustration combines an image of Jupiter from the JunoCam instrument aboard NASA’s Juno spacecraft with a composite image of Earth to depict the size and depth of Jupiter’s Great Red Spot. Picture: NASA/JPL-Caltech/SwRI/MSSS

The planet, known as a gas giant, is composed primarily of hydrogen* and helium*, with traces of other gases. Stripes and a few storms like the Great Red Spot dominate* the colourful appearance of Jupiter, the fifth planet from the sun with a diameter* of about 143,000 km.

The Great Red Spot is a storm roughly 16,000 km wide churning in Jupiter’s southern hemisphere, boasting crimson-coloured clouds that spin counterclockwise at high speeds. It is one of the marvels of the solar system and has been in existence for centuries, but until now scientists have had little understanding of what lies below its surface.

“From a scientific point of view, it’s puzzling how the storm can last so long and be so big,” said Dr Scott Bolton, principal investigator of the Juno mission at the Southwest Research Institute in Texas and lead author on one of two Jupiter studies published in the journal Science on Thursday.

“It is wide enough to swallow the Earth,” added Dr Marzia Parisi, a Juno scientist from NASA’s Jet Propulsion* Laboratory in California and lead author of the second study. 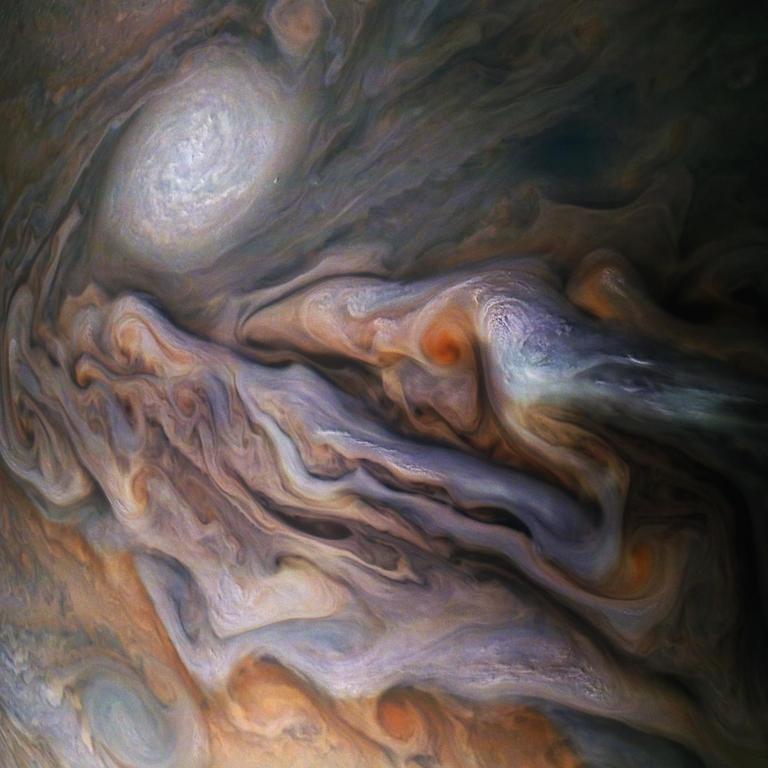 An instrument called a microwave radiometer enabled scientists to peer beneath Jupiter’s cloud tops and investigate the structure of its numerous vortex* storms including the Great Red Spot, showing that they exist very deep in Jupiter’s atmosphere – much deeper than expected.

Rather than being confined to the uppermost parts of Jupiter’s atmosphere, the Great Red Spot’s roots plunge to regions beyond where water condenses and clouds form – and below where any sunlight reaches.

Juno data previously showed that jet streams in Jupiter’s atmosphere reach down even further, to depths of about 3200 km.

Assumptions* based on how Earth’s atmosphere behaves, as well as models produced over the past few decades, had given the impression that the Great Red Spot was a relatively shallow storm, Dr Bolton said.

“Jupiter works in this mysterious way that we’re sort of revealing for the first time – because this is the first mission that’s been able to look inside the planet,” Dr Bolton said. “And we’re seeing surprises.” Cyclones at the north pole of Jupiter appear as swirls of striking colours in this image from NASA’s Juno mission. The huge is visible at the centre of the image, encircled by smaller cyclones that range in size from 4000 to 4600km. Together, this pattern of storms covers an area that would dwarf the Earth. Picture: NASA

Jupiter and Earth are vastly different worlds – and not just in terms of size. Earth is a rocky place. Jupiter lacks a solid surface though it may have a solid inner core.

Juno has been orbiting Jupiter since 2016, obtaining information about its atmosphere, interior structure, internal magnetic field and the region around it created by its internal magnetism. Juno is also due to fly by Jupiter’s large moons Europa and Io and explore the small rings around the planet.

The Great Red Spot has evolved in shape over time and there are indications that it may be shrinking in size.

“It’s the biggest storm in the entire solar system. There isn’t anything else like it,” Dr Bolton said. “The extremes are usually fascinating but they also create incredible beauty.”

CLASSROOM ACTIVITIES
1. Jupiter infographic
Use all the information from the Kids News article to create an infographic on Jupiter. An infographic is a graphic visual representation of information, data, or knowledge intended to present information quickly and clearly.

Your infographic should include things such as Jupiter’s size, the gases it’s made up of, information about the Great Red Spot, its surface and so forth.

Make your infographic visually appealing, easy to read and ascertain information from.

2. Extension
Jupiter is the solar system’s largest planet and can fit 1000 Earths inside it.

Earth is a rocky place and Jupiter lacks a solid surface.

Reflect on the two statements above and write down the words and phrases that come to mind when reading them. Can you draw a picture that represents your thoughts?

Explain your thinking to a classmate.