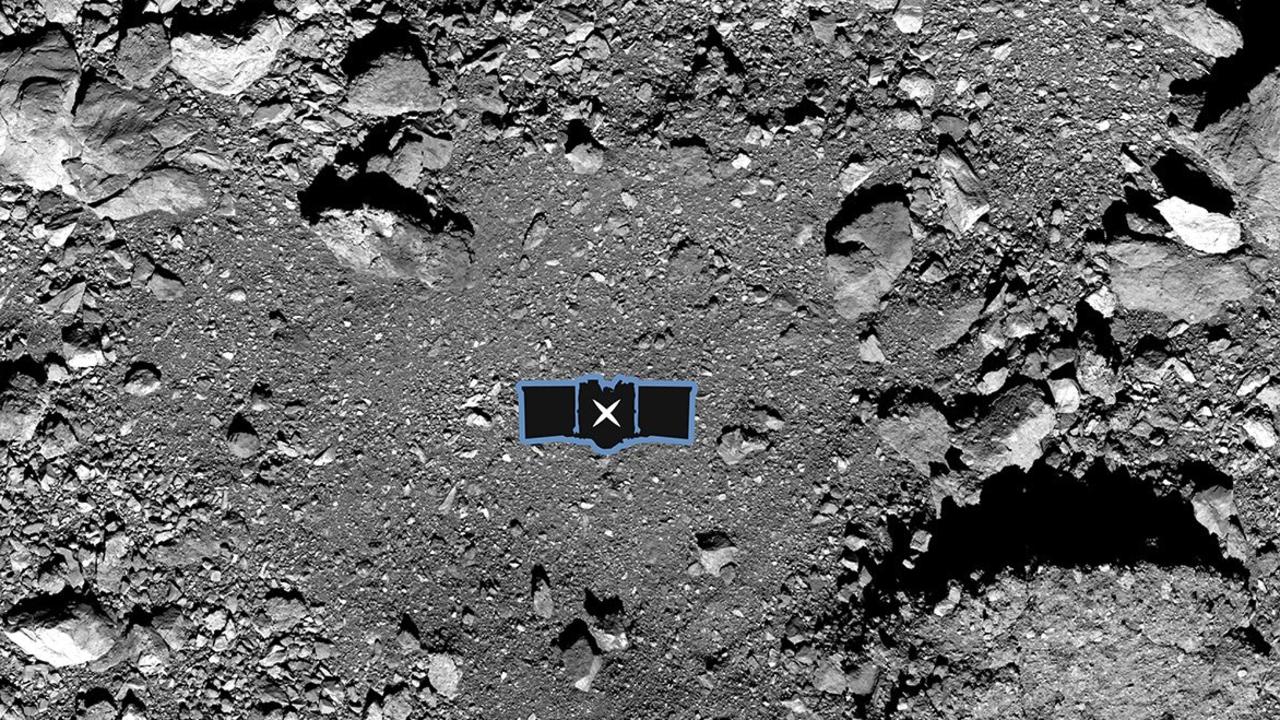 The Osiris-Rex spacecraft's primary sample collection site, named "Nightingale," on the asteroid Bennu. An outline of the OSIRIS-Rex spacecraft is placed at centre to illustrate the scale of the site, which is surrounded by boulders as big as buildings. Picture: NASA/Goddard/University of Arizona via AP

After almost two years circling an ancient asteroid hundreds of millions of kilometres away, a NASA spacecraft has descended to the treacherous*, boulder-packed surface and attempted to snatch a handful of rubble.

The attempt, which happened Wednesday morning Australian time, is the first time the US has tried to collect asteroid samples for return to Earth. So far, only Japan has achieved this.

The Osiris-Rex mission is looking to bring back at least 60g worth of asteroid Bennu, the biggest haul from beyond the Moon. While NASA has confirmed the mission looked like it was a success, it won’t know how much was collected for about a week. Asteroid Bennu seen from the Osiris-Rex spacecraft. Picture: NASA/Goddard/University of Arizona/CSA/York/MDA via AP

The van-sized spacecraft aimed for the relatively flat middle of a tennis court-sized crater named Nightingale. Boulders as big as buildings loom over the targeted touchdown zone.

“So for some perspective, the next time you park your car in front of your house or in front of a coffee shop and walk inside, think about the challenge of navigating Osiris-Rex into one of these spots from 200 million miles (322 million kilometres) away,” said NASA’s deputy project manager Mike Moreau.

Once it dropped out of its 750m-high orbit around Bennu, the spacecraft took about four hours to carefully and slowly make it all the way down, to just above the surface.

Then the action cranked up when Osiris-Rex’s 3.4m arm reached out and touched Bennu. Before the mission, experts predicted contact would last five to 10 seconds, just long enough to shoot out pressurised nitrogen gas and suck up the churned* dirt and gravel. The sampling arm of the Osiris-Rex spacecraft during a rehearsal for an approach to the “Nightingale” sample site on the surface of the asteroid Bennu, taken on August 11, 2020. Picture: NASA/Goddard/University of Arizona via AP

The spacecraft was programmed in advance and operated autonomously during the manoeuvre*. With an 18-minute lag in radio communication each way, ground controllers for spacecraft builder Lockheed Martin near Denver, US, couldn’t intervene*.

While NASA has brought back comet dust and solar wind particles, it’s never attempted to sample one of the nearly 1 million known asteroids lurking* in our solar system until now. Japan, meanwhile, expects to get samples from asteroid Ryugu in December — in the milligrams* at most — 10 years after bringing back specks from asteroid Itokawa.

Bennu is a valuable asteroid from which to collect a sample.

The big, black, roundish, carbon-rich space rock was around when our solar system was forming 4.5 billion years ago. Scientists consider it a time capsule full of pristine* materials that could help explain how life formed on Earth and possibly elsewhere.

“This is all about understanding our origins,” said the mission’s principal scientist, Dante Lauretta of the University of Arizona, US.

There also are selfish reasons for getting to know Bennu better.

The solar-orbiting asteroid, which swings by Earth every six years, could take aim at us late in the next century. NASA puts the odds of an impact at 1-in-2700. The more scientists know about asteroids such as Bennu, the safer Earth will be.

When Osiris-Rex blasted off in 2016, scientists envisioned* sandy areas on Bennu’s surface. So the spacecraft was designed to ingest* small pebbles less than 2cm across.

Scientists were stunned to find massive rocks and chunky gravel all over the place when the spacecraft arrived in 2018. And pebbles were occasionally seen shooting off the asteroid, falling back and sometimes bouncing off again in a game of space ping pong.

With so much rough terrain, engineers scrambled to aim for a tighter spot than originally predicted. Nightingale Crater, the prime target, appears to have the biggest abundance* of fine grains, but there are still many boulders, including one named Mount Doom. An artist’s impression of the Osiris-Rex spacecraft near the asteroid Bennu. Picture: NASA

Osiris-Rex has three bottles of nitrogen gas, which means it can touch down three times — no more.

The spacecraft automatically will back away during a collection attempt if it meets unexpected hazards like big rocks that could cause it to tip over. And there’s a chance it could have touched down safely, but failed to collect enough rubble.

In either case, the spacecraft could return to orbit around Bennu and try again in January at another location.

Before the first try, Professor Lauretta was worried, nervous, excited “and confident we have done everything possible to ensure a safe sampling.” 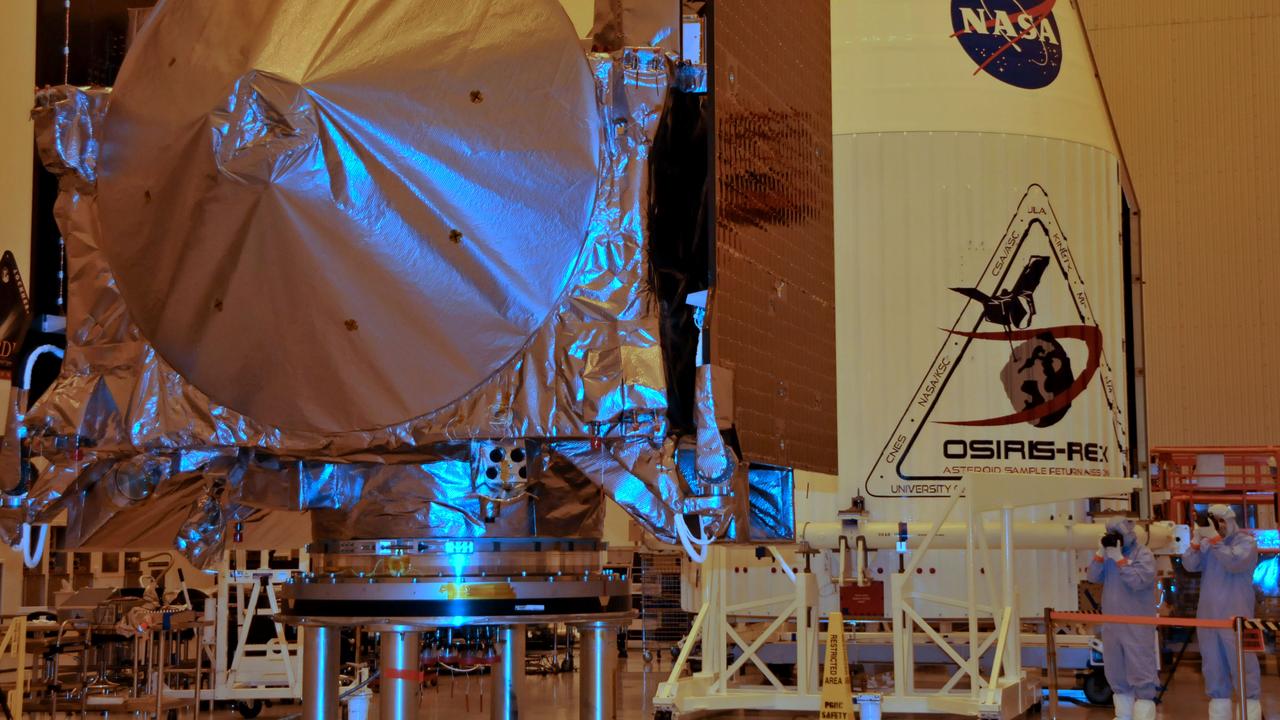 The Osiris-Rex spacecraft sits on its workstand at Kennedy Space Center, Florida, US, on August 20, 2016, before launch. Picture: AFP

NASA on mission to strike gold in space by 2022

CLASSROOM ACTIVITIES
1. Simplify the mission
The description of this mission sounds very complex with lots of steps to the overall mission. Have a go at simplifying the mission by listing the name of the mission, its aims and the approximate timeline for each step from its launch to its return to Earth.

Use the following headings to help you.

2. Extension
From the description and photos of Bennu’s surface and the description of how the collection of the ‘rubble’ will take place, draw a picture of what you think this scene will look like.

Write a caption to go under your picture explaining what is happening.

VCOP ACTIVITY
Why Learning to Code is Important
Think about all the video games and apps you play. They are all coded to work a certain way and deliver the information to the user. But it’s not just games that need coding. The NASA spacecraft has been pre-coded with a set of instructions, included how to avoid dangers and abort if needed. Because of the delay in radio communications, the programmer Lockheed Martin won’t be able to help the spacecraft if it gets itself in trouble. Imagine how many different variations of instructions would have been programmed in, just in case.

Write a letter to your parents explaining why you should be enrolled in code camp, robotics or why you should get that new video game you really want. Use this occupation as a guide of why it’s important to learn these things, and think of other jobs is might also relate too as well. Remember your parents will want to know that you’ll be responsible with the amount of time you spend in front of a screen and still complete your other tasks for school or the home.

Consider your audience as you write the letter and ensure the language you use matches how you should speak to them, compared to a sibling or peer for example.

HAVE YOUR SAY: Where would you like to land to collect samples?
No one-word answers. Use full sentences to explain your thinking. No comments will be published until approved by editors.