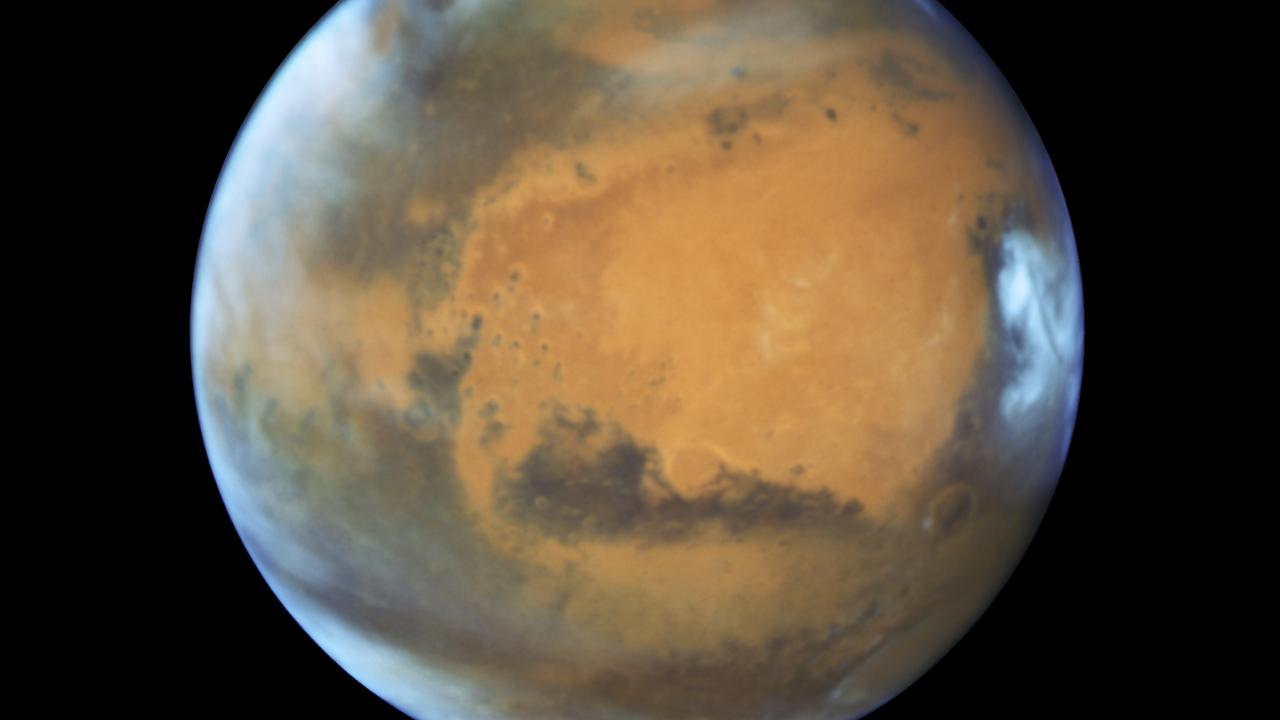 If the NASA scientist’s plan worked, we could reach Mars in under 13 minutes, seen here from the Hubble Space Telescope. Picture: NASA

A NASA scientist has a plan for a space rocket engine that could reach close to the speed of light without using any fuel.

Travelling at such speeds, the machine — which is still just an idea — could carry astronauts to Mars in less than 13 minutes, or to the Moon in just over a second.

However, the real purpose of the so-called “helical* engine” would be to travel to distant stars far quicker than any existing technology allows, according to NASA engineer Dr David Burns.

Dr Burns, from NASA’s Marshall Space Flight Center in Alabama, US, unveiled the idea in a paper posted to NASA’s website.

“This in-space engine could be used for long-term satellite station-keeping without refuelling,” Dr Burns wrote in his paper.

“It could also propel spacecraft across interstellar* distances, reaching close to the speed of light.”

Dr Burns’ idea is revolutionary because it doesn’t require any rocket fuel.

Today’s rockets, like those built by NASA and SpaceX, would need tonnes of fuel such as liquid hydrogen to carry people to Mars and beyond.

The problem is, the more fuel you carry, the heavier it is. Modern fuel tanks are far too bulky to take on interstellar flights. 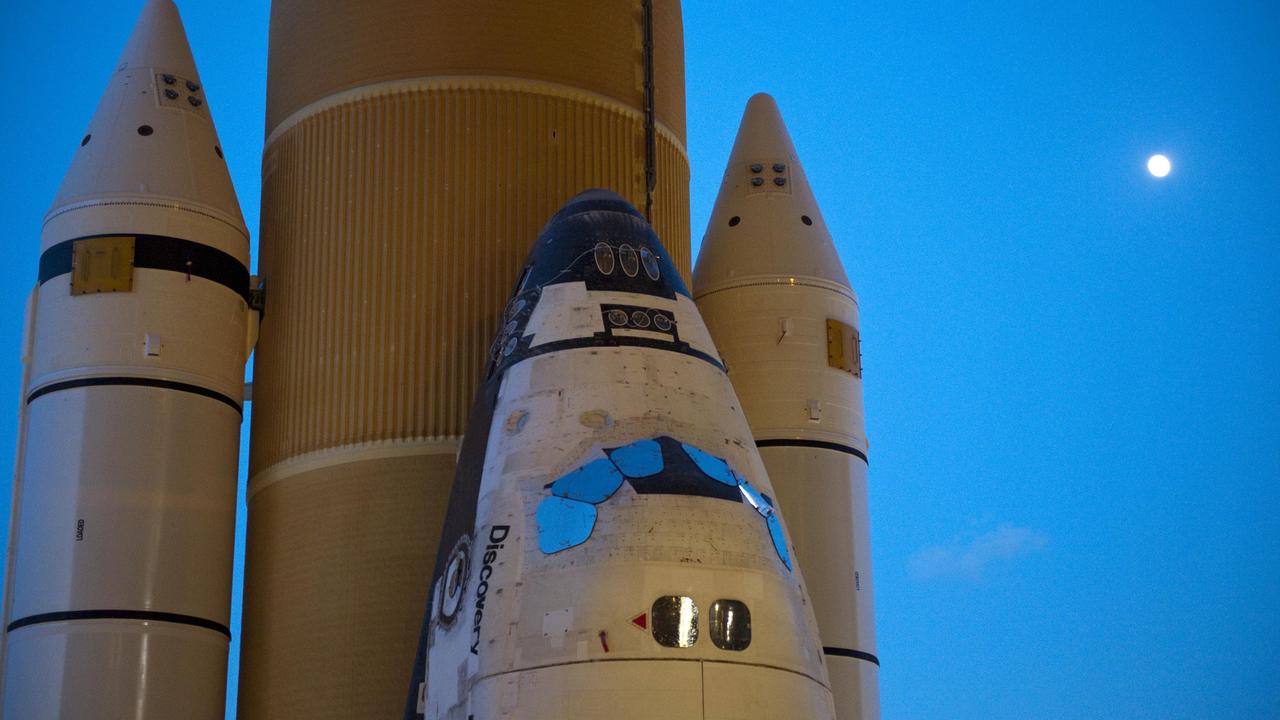 The helical engine gets around this using particle accelerators, which we have already on Earth and actually already exist naturally in space. We already have particle accelerators on Earth, including the Large Hadron Collider in Switzerland, the largest particle accelerator ever built. It allows scientists to re-create conditions that were only present a few nanoseconds after the Big Bang.

The engine could theoretically reach speeds of around 297 million metres per second, according to Dr Burns.

It is just an idea for now, and it’s not clear if it would actually work.

“If someone says it doesn’t work, I’ll be the first to say, it was worth a shot,” Dr Burns told New Scientist.

“You have to be prepared to be embarrassed. It is very difficult to invent something that is new under the sun and actually works.”

In its simplest terms, the engine works by taking advantage of how mass changes at the speed of light.

In his paper, Dr Burns explains his idea by describing a ring inside a box, attached to each end by a spring.

When the ring is sprung in one direction, the box recoils in the other, as is described by Newton’s laws of motion: Every action must have an equal and opposite reaction.

“When the ring reaches the end of the box, it will bounce backwards, and the box’s recoil direction will switch too,” New Scientist explains.

However, if the box and the ring are travelling at the speed of light, things work a little differently.

At such speeds, according to Albert Einstein’s theory of relativity, as the ring approaches the end of the box it will increase in mass.

This means it will hit harder when it reaches the end of the box, resulting in forward momentum. The engine would propel a rocket a bit like a ring inside a box, attached to each end by a spring. When the ring is sprung in one direction, the box recoils in the other (a). When the ring reaches the end of the box (b), it will bounce backwards (c), and the box’s recoil direction will switch too (d).

The engine itself wouldn’t have a ring on a spring but will achieve a similar result using a particle accelerator and tiny particles.

Dr Burns calculated the engine would have to be almost 200m long and 12m wide to work and would only operate effectively in the frictionless* environment of deep space.

The design is capable of producing a thrust up to 99 per cent the speed of light without breaking Einstein’s theory of relativity, according to Dr Burns.

However, the plan does break Newton’s law of motion — which would mean it breaks the laws of physics*. PARTICLE ACCELERATORS
Dr Burns’ idea is to create a particle accelerator to power a space rocket.

In a particle accelerator, tiny particles are fired at high speed using electromagnets*, recycled back around the engine, and fired again, moving the rocket forward.

There are more than 30,000 particle accelerators in use on Earth. They’re used in science experiments, for cancer treatment and to kill bacteria in food, among other uses.

Famous physicist Stephen Hawking said that particle accelerators are the closest thing we have to time machines and to time travel — though he never suggested we should try — we would just need to build a particle accelerator big enough to move humans instead of just tiny particles. Real humans haven’t yet travelled at the speed of light, though Star Wars movie characters did it all the time to zip around between stars.

AT THE SPEED OF LIGHT
If humans were ever able to travel at the speed of light, light would not keep up with you.

So, everything would go dark behind you.

Light to the sides of you would likely streak past in lots of bands of colour.

Light in front of you would arrive quicker than normal and thus appear bright and intense.

This article originally appeared on The Sun and is republished here with permission.

Pack your bags for a space holiday

2. Extension
Do you think that scientists like Dr Burns should work on projects or ideas that might not be possible? Write a piece of persuasive text. Use lots of examples to make your opinion as convincing as possible.

VCOP ACTIVITY
Take a risk
It is just an idea for now, and it’s not clear if it would actually work.

“If someone says it doesn’t work, I’ll be the first to say, it was worth a shot,” Dr Burns told New Scientist.

“You have to be prepared to be embarrassed. It is very difficult to invent something that is new under the sun and actually works.”

Some really powerful comments from Dr Burns about taking a risk on an idea and giving it a go.

Write a paragraph about when you took a risk to attempt and learn something new, or try something new. What was it? What happened?

How did it feel leading up to it, doing it, and then after it?

Taking risks and getting outside your comfort zone is important so that you keep learning and growing.

However, it’s important to remember that sometimes people ask us to take risks that are not good decisions. Always remember to keep yourself safe, make sure you are comfortable and don’t think because ‘everyone else is doing it’ you have to, too. Peer pressure is not a safe risk.

HAVE YOUR SAY: Do you think this idea could work?
No one-word answers. Use full sentences to explain your thinking. No comments will be published until approved by editors.