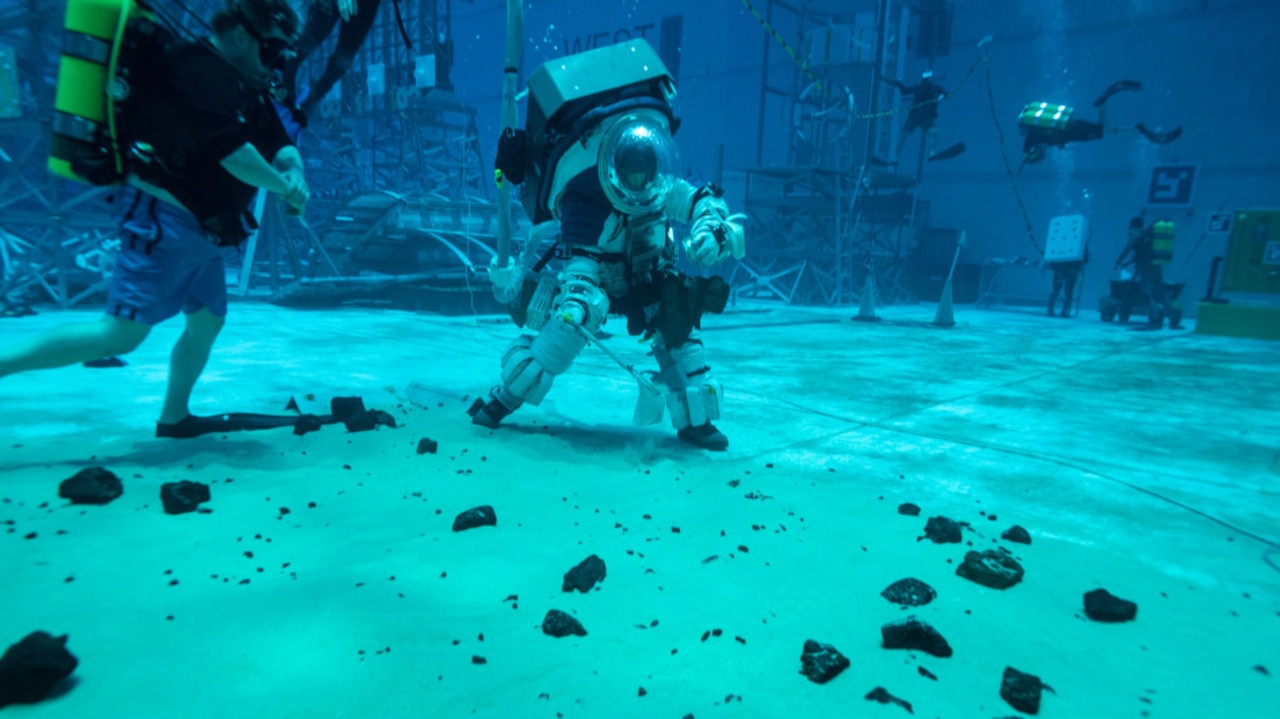 The underwater trials will help astronauts prepare for working in low-gravity conditions and test how the new suits perform. Picture: NASA

NASA has begun underwater tests of its new space suits ahead of plans to land astronauts on the Moon in 2024.

Photos of the trials at NASA’s Johnson Space Center in Houston, Texas, US show suit-clad* engineers walking at the bottom of a pool in several metres of water.

The tests – which include practising picking up Moon rocks and planting an American flag – help astronauts prepare for working in low-gravity conditions. The tests include practising picking up Moon rocks and planting an American flag in sand. Picture: NASA

NASA’s next crewed lunar mission is called Artemis and will mark the first time people have landed on the Moon in nearly 50 years.

They’re using demo* versions of the spacesuits for now, with the real ones still in development.

“This early testing will help determine the best complement* of facilities for hardware development and requirements for future Artemis training and missions,” said NASA’s Daren Welsh.

“At the same time, we are going to be able to gather valuable feedback on space walk tools and procedures that will help inform some of the objectives for the missions.”

Two suits designed for moonwalks were shown off by NASA last year that allow for extra movement on the lunar surface.

“Astronauts are practising a variety of tasks, including picking up samples of lunar regolith*, examining a lunar lander, and planting an American flag,” NASA wrote in a blog post.

“There are many fundamentals* that the teams have to consider and work through, such as how crew might get up and down a ladder safely, how to swing a hammer safely, and how to conduct successful moonwalks in different lighting conditions than the Apollo-era moonwalks.”

Tests will inform how to carry out future moonwalks, including how many to conduct during a mission and how far from a lander the crew will travel. 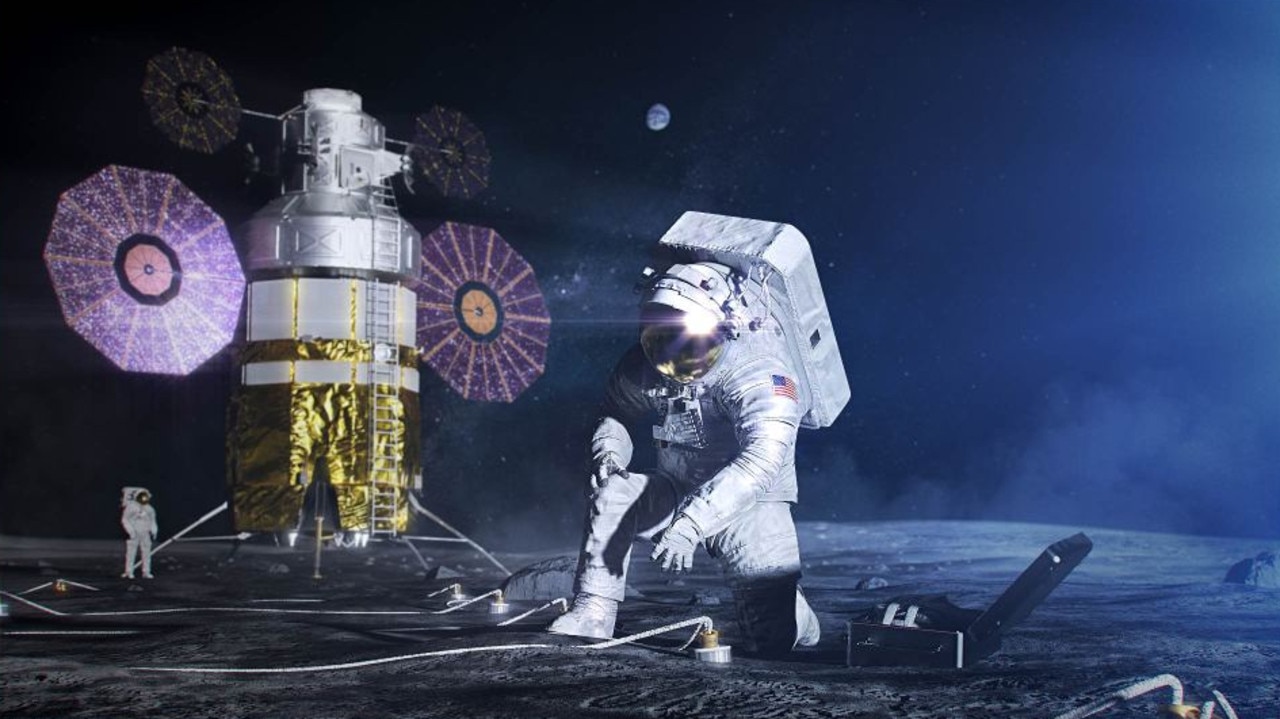 An artist’s impression of astronauts conducting scientific experiments on the Moon in the future. Picture: NASA

In addition to the buoyancy lab, NASA is also testing the suits on dry land, the space agency said.

Tests are occurring at Johnson’s rock yard, a large, outdoor area landscaped like the lunar surface.

Though NASA has plenty of experience in training astronauts for spacewalks at the International Space Station, it hasn’t conducted a moonwalk in decades.

“We need to determine how we’re going to train the crew for surface operations during these specific missions,” Mr Welsh said.

Astronauts will wear a suit of orange fabric inside the spacecraft and a much bigger, mostly white suit on the lunar surface. 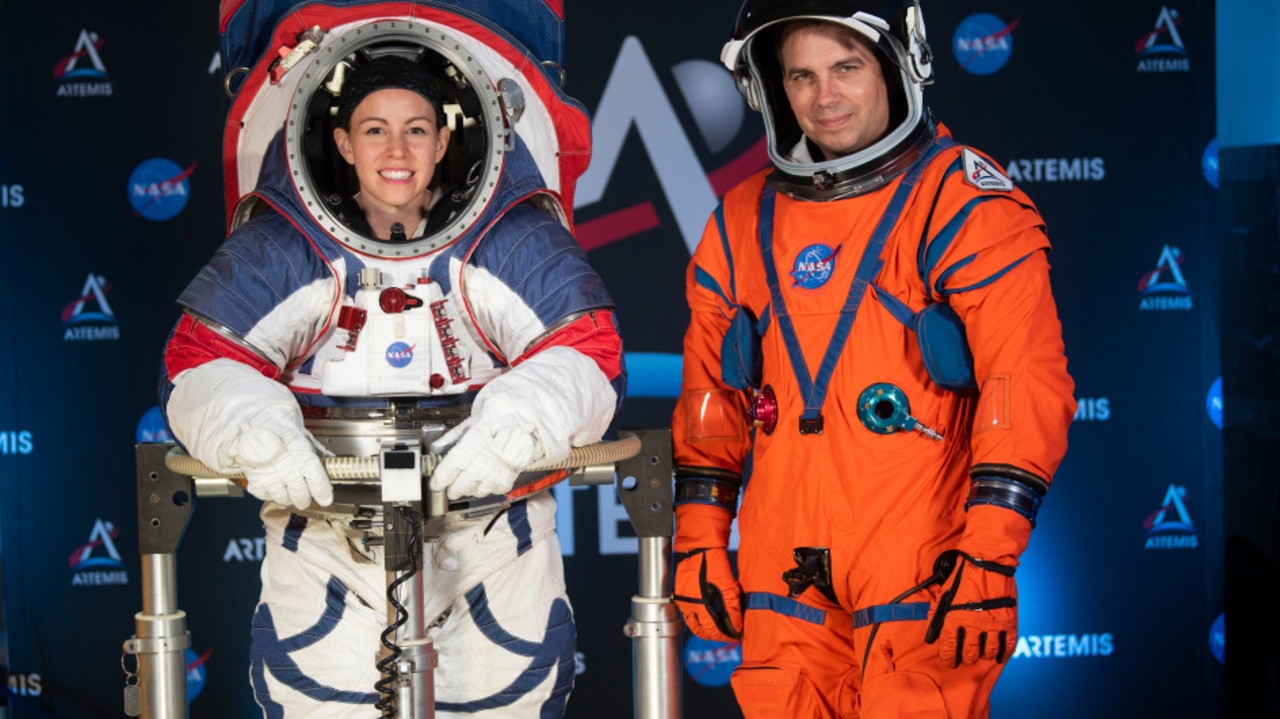 The new suits make it much easier to walk, bend and squat when working on the Moon.

“We want systems that allow our astronauts to be scientists on the surface of the Moon,” NASA’s Chris Hansen said when the new suits were launched in October 2019.

NASA has promised that its first moonwalking team will include a woman.

Two astronauts would land on the lunar south pole, where vast reserves of frozen water could be used for future missions.

Across several missions spanning 2024 to 2028, the eventual goal is to colonise the Moon as a staging ground for future missions to Mars.

The last time astronauts landed on the lunar surface was 1972. 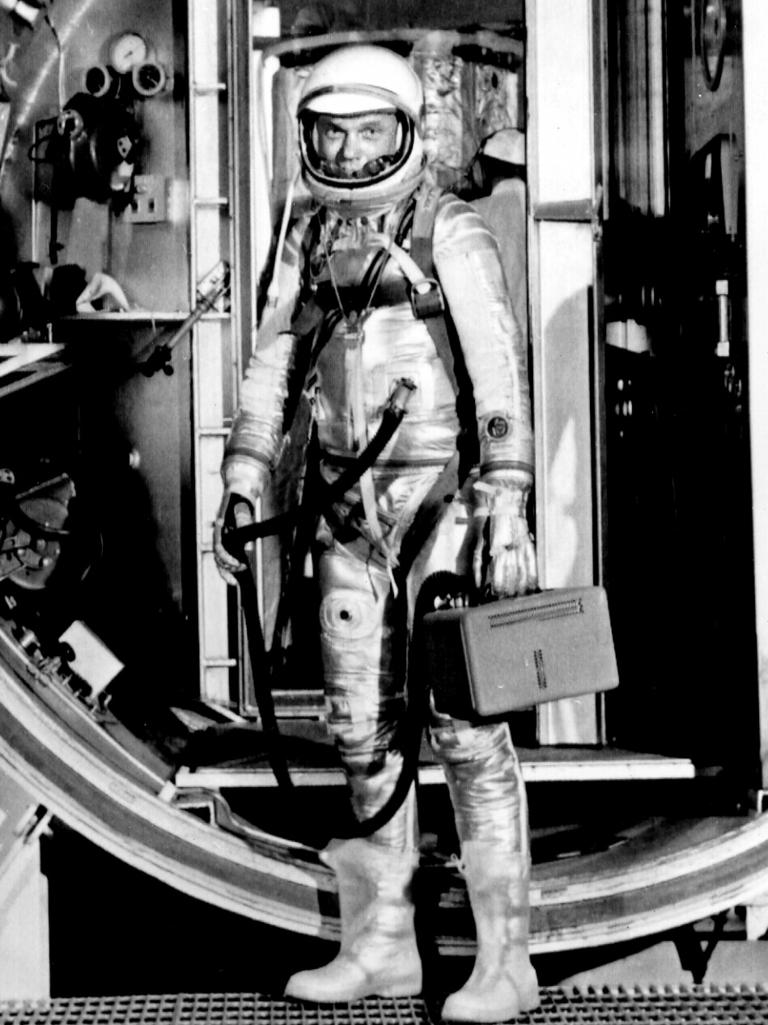 NASA astronaut John Glenn in his spacesuit in 1961. He was the first American to orbit Earth, in Friendship 7. Picture: UPI Space

What it takes to become an astronaut

The Eagle has landed … and man walks on the Moon

CLASSROOM ACTIVITIES
1. Moon Mission Objectives
An objective can be something that you plan to achieve, do or find out. What do you think the objectives for the Artemis mission to the moon should be? Write as many as you can think of. Next to each objective write reasons why you think that this is an important thing that should be done.

2. Extension
Look carefully at the photos showing the underwater testing. Can you see any problems with the spacesuits or things that could be improved? Create a new design for the suit that would make them even better for the astronauts as they are working in low-gravity conditions.

VCOP ACTIVITY
Design and label a new space suit for NASA.
Read through the article and highlight the features that NASA is hoping to incorporate. Then using those as a basis, add some extra features you think the astronauts should also have access too.

Draw, colour, and label your suit- then write a short paragraph explaining what you created and why.

Remember to use your VCOP, be as specific as you can be and re-read your writing before saying you are done.

HAVE YOUR SAY: Which of your qualities would help you be a good astronaut?
No one-word answers. Use full sentences to explain your thinking. No comments will be published until approved by editors.