NASA’s Atlas 5 rocket blasts off with the Perseverance rover on-board on its way to Mars. Picture: NASA/AFP

NASA’s Mars rover Perseverance has blasted off on an Atlas 5 rocket on a $3.4 billion mission to search for traces of potential past life on Earth’s planetary neighbour.

The robotic rover — a car-sized, six-wheeled vehicle carrying seven scientific instruments — is also scheduled to deploy* a mini helicopter on Mars and try out equipment for future human treks* to the fourth planet from the sun.

It is scheduled to arrive at Mars, also known as the red planet, in February after a journey of 480 million kilometres.

Perseverance soared into the sky from the Cape Canaveral Air Force Station in Florida in the US on July 30.

“The spacecraft is in good health and on its way to Mars,” NASA administrator Jim Bridenstine wrote on Twitter. The launch was not without a minor glitch*. A “communications issue” in the first few hours after lift-off hampered* the retrieving* of precise location and positioning data from the spacecraft. The glitch involved NASA’s global network of antennas which are used to communicate with its most distant probes, but the issue was quickly fixed.

The launch of Perseverance marked NASA’s ninth journey to the Martian surface.

It was the third unmanned Mars mission launched in 10 days after the United Arab Emirates launched its Hope Probe on July 20 and China sent its Tianwen-1 probe on July 23.

It’s the biggest race to Mars in history. The opportunity to fly between Earth and Mars comes around only once every 26 months when the planets are on the same side of the sun and about as close as they can get. An illustration of NASA’s Perseverance rover operating on the surface of Mars. Picture: NASA/JPL-Caltech 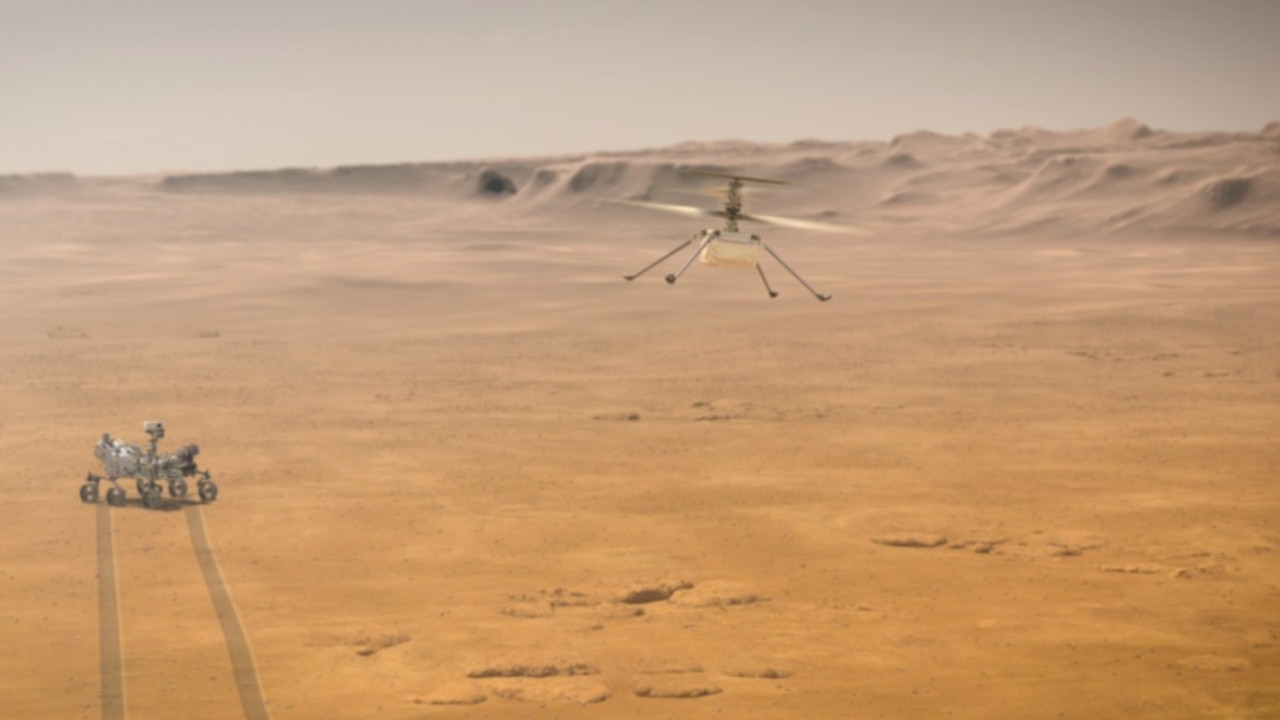 An artist’s concept of the Ingenuity helicopter that will be deployed by Perseverance after landing on Mars. Picture: NASA/JPL-Caltech

Perseverance is due to land at the base of a 250m-deep crater called Jezero, the site of a former lake and water system from 3.5 billion years ago that scientists suspect could have evidence of ancient microorganisms*, that would show the planet once sustained life.

Scientists have long debated whether there has ever been life on Mars, which was once a much more hospitable* place than it is today. Water is considered a key ingredient for life, and billions of years ago Mars had lots of water on its surface.

Also on-board Perseverance is a 1.8kg mini helicopter named Ingenuity, which will attempt the first powered flight on another planet.

Perseverance will conduct an experiment to convert elements of the carbon dioxide-rich atmosphere* into fuel for future rockets launching off the Martian surface, or to produce breathable oxygen for future astronauts.

It will also collect and store rock and soil samples intended to be returned to Earth in the future.

CLASSROOM ACTIVITIES
1. What’s in a name?
Each of the three spacecraft launched towards Mars over the 10 days between July 20 and July 30 have a unique and meaningful name. Identify each of these names and for each one write a short paragraph explaining what you think the name symbolises or represents to those who chose it. (Tip: to find out the translation of China’s mission’s name you can refer back to a Kids News article from July 26, 2020 or perform a quick internet search.)

Then, imagine that you have been chosen to name a future mission to Mars. Decide on an appropriate name for the mission and give an explanation for why you believe this is a suitable choice.

VCOP ACTIVITY
I Spy Nouns
Nouns are places, names (of people and objects), and time (months or days of the week). How many nouns can you find in the article? Can you sort them into places, names and time?

HAVE YOUR SAY: What do you think the rover will find on Mars?
No one-word answers. Use full sentences to explain your thinking. No comments will be published until approved by editors.