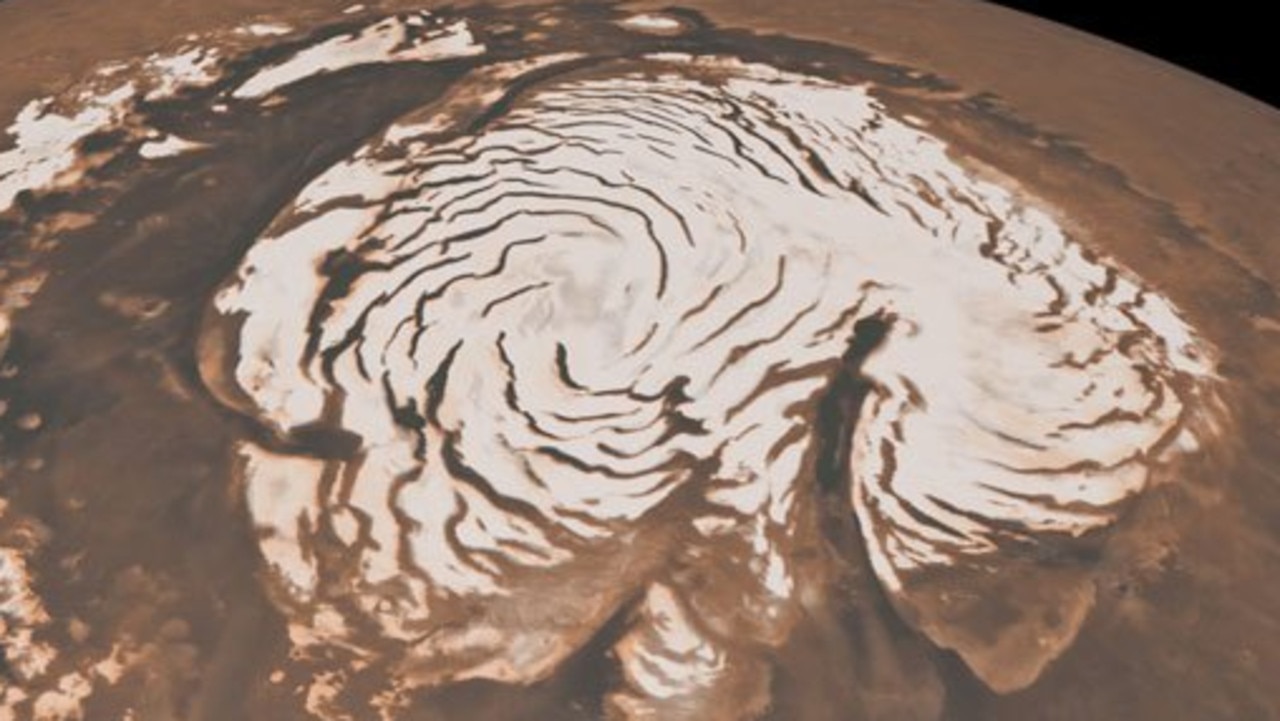 Mars was once covered in huge ice sheets that carved out thousands of giant valleys, experts have revealed.

The Martian ice age saw glacial* ice change the red planet’s landscape – in the same way as on Earth.

This challenges previous theories that Mars was warm and wet at the time, covered in rivers, oceans and under heavy rainfall.

Now scientists believe that there was so much ice 3.8 billion years ago that it created huge valleys, which can still be seen today. 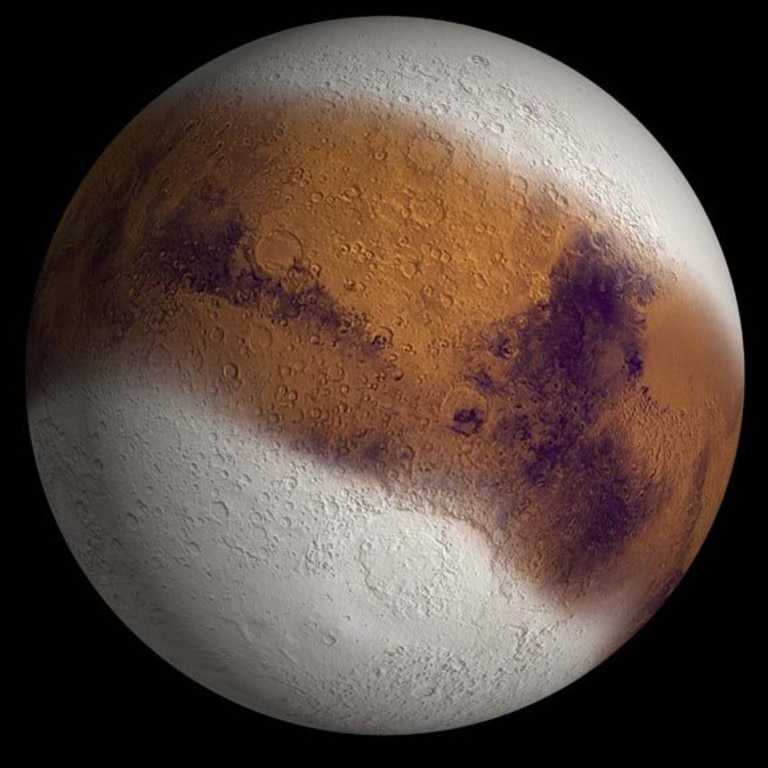 An artist’s illustration of what ancient Mars could have looked like, covered in so much ice that it created giant valleys still obvious today. Picture: NASA

The discovery involved using computer modelling to reveal how thousands of individual Martian valleys were created.

“For the last 40 years, since Mars’ valleys were first discovered, the assumption was that rivers once flowed on Mars, eroding* and originating all of these valleys,” said lead author Anne Grau Galofre, of the University of British Columbia, Canada.

“But there are hundreds of valleys on Mars, and they look very different from each other.

“If you look at Earth from a satellite you see a lot of valleys.

“Some of them (are) made by glaciers, some made by other processes, and each type has a distinctive shape.

“Mars is similar, in that valleys look very different from each other, suggesting that many processes were at play to carve them.”

Dr Grau Galofre’s inspiration for the study came from the channels on Devon Island, in the Canadian Arctic.

Dr Grau Galofre and her co-author realised how similar they were to many Martian valleys.

“Devon Island is one of the best analogues* we have for Mars here on Earth — it is a cold, dry, polar desert, and the glaciation is largely cold-based,” said Gordon Odinski, a professor at Western University. And the results showed that there was “extensive subglacial erosion” on the Martian surface.

This was driven by channels of meltwater drainage below an ancient ice sheet on Mars.

The study also showed that “only a fraction” of valley networks matched typical surface water erosion – the kind created by rivers or oceans.

It helps explain how valleys formed 3.8 billion years ago on a planet more distant from the Sun than Earth – when the Sun was less intense.

“We tried to put everything together and bring up a hypothesis* that hadn’t really been considered.

“That channels and valley networks can form under ice sheets, as part of the drainage system that forms naturally under an ice sheet when there’s water accumulated at the base.”

According to the researchers, the ice age environment would have supported better survival conditions for ancient Martian life.

Ice sheets would have provided more protection and stability for the underlying water and shelter from star radiation in the absence of a magnetic field*.

This research was published in the journal Nature Geoscience. 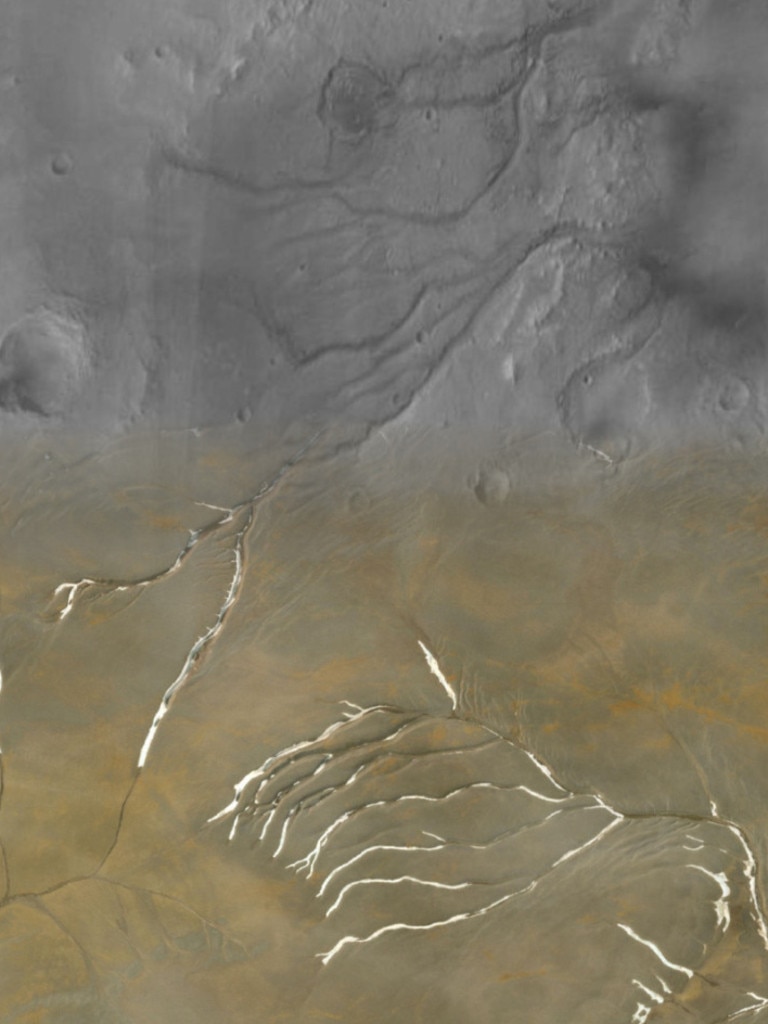 The top half of the image is Mars’ Maumee valleys, with channels on Devon Island in the bottom half, revealing an almost identical shape. Picture: University of British Columbia

CLASSROOM ACTIVITIES
1. Images of Mars
Choose an aspect of this Kids News article that interests you the most to visually represent in an illustration or art piece of your choice. You could choose to do a painting, drawing, collage or 3D diorama if time permits. Choose a title for your piece and write a short sentence about what it represents

2. Extension
Write a list of questions you have about planet Mars or Olympus Mons. Compare your questions to others and discuss your wonderings.

HAVE YOUR SAY: What interests you most about Mars?
No one-word answers. Use full sentences to explain your thinking. No comments will be published until approved by editors.