Solar probe gets closer to the Sun by going faster 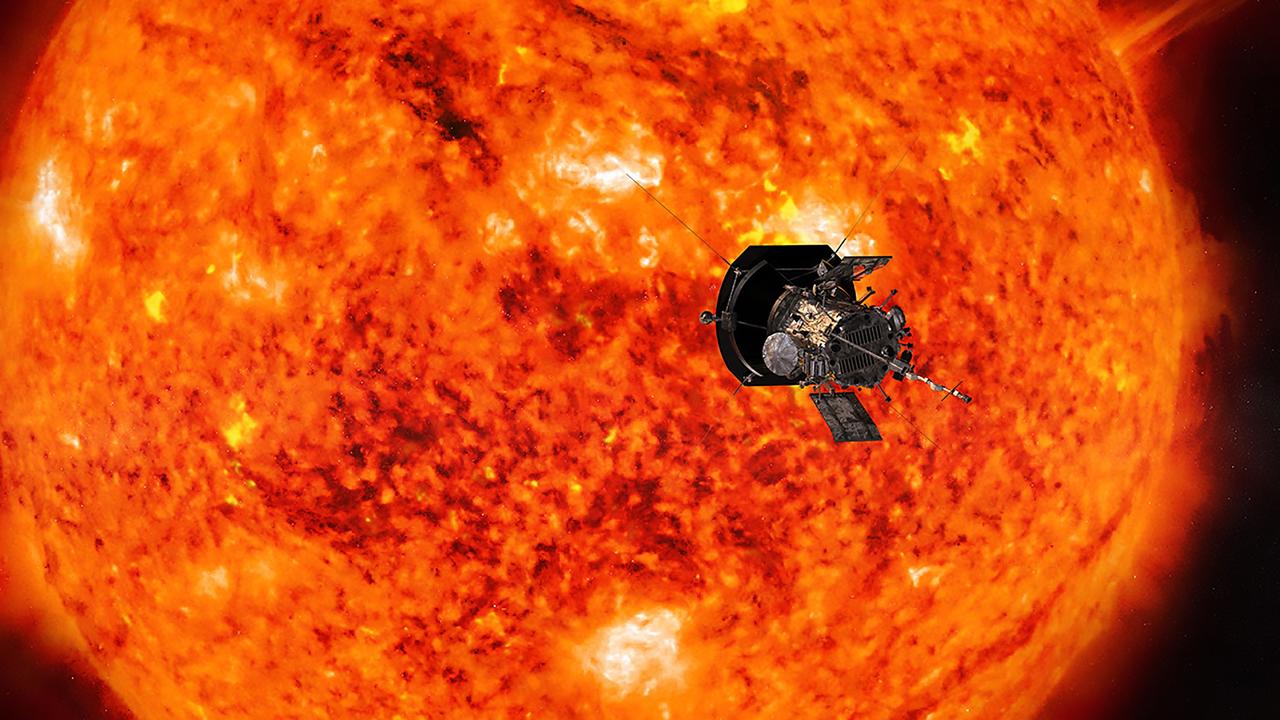 NASA’s Parker Solar Probe has just broken its own record for fastest man-made object in history as part of its mission to get closer to the Sun. Picture: AFP Photo/NASA/Johns Hopkins APL

A rugged* NASA probe has soared across space and ‘touched the Sun’ in a truly astronomical feat.

The 482,781 km per hour Parker Solar Probe will get even closer – and is already officially the fastest man-made object ever created.

In truth, there are many different ways to ‘touch’ the Sun; the star is multi-layered and its effects extend far from the core.

In this case, the probe has glanced* the Sun’s toasty outer atmosphere.

The probe has also become the fastest man-made object, travelling at a mind-blowing 532,000 km per hour. Engineers examine the Parker Solar Probe at NASA Goddard Space Flight Center in 2018. Car-sized and protected by a very thick heat shield, the probe travels closer to the Sun than any spacecraft in history. Picture: Jim Watson/AFP.

The speed is brain-boggling: the probe could circumnavigate* Earth in under five minutes and reach the Moon in less than an hour.

NASA’s probe is using an orbit that takes it around Venus, using the planet’s gravity to bring it ever closer to the Sun.

With each pass, the probe’s total speed is ramping up.

During the trip, the probe endures temperatures of 1,300C.

The Parker Solar Probe is one of NASA’s most exciting missions.

It launched back in 2018 to observe the outer corona* of the Sun – from a closer viewpoint than any previous probe.

NASA has tracked eight passes around the Sun of a planned 24 trips.

The mission is due to end in 2025, but could be extended if NASA chooses.

Eventually, it’s possible that the probe will slowly spiral into the Sun, ultimately destroying the craft. This NASA photo from 2017 shows several bright bands of plasma on the Sun connecting one active region to another. Even though they are tens of thousands of kilometres away from each other, these connecting lines are clearly visible in this wavelength of extreme ultraviolet light. The Parker Solar Probe become the first craft to fly directly into the Sun’s atmosphere the following year. Picture: AFP Photo/NASA/GSFC/Solar Dynamics Observatory”

Choose 5 facts from this news story that you think are the most important or interesting. Create an infographic that incorporates images and these facts. Your infographic should enable a viewer who only has one minute to look at it, to come away with a basic knowledge of what the story was about.

The Parker Solar Probe has so far travelled at a top speed of 532,000 kms per hour. What does this equate to per minute? What about per second?