The Southern Cross and the pointers Alpha and Beta Centauri, showing the position of Proxima Centauri, which cannot be seen with the naked eye. Picture: Martin George

It was just one slightly bent line in a field of noise. But it wasn’t supposed to be there. What followed next drew Australia’s Parkes radio telescope into an extraterrestrial* frenzy.

In April 2019, Australia’s CSIRO radio telescope near the town of Parkes in NSW heard something odd.

It was watching the nearby star Proxima Centauri. Its purpose was to observe the impact of solar flares on the red dwarf’s small system of planets. But such surveys also offered an opportunity to find signals that were more manufactured*. An artist’s impression of a solar flare ejected from Proxima Centauri. The Parkes Observatory telescope in NSW was observing the impact of solar flares on the red dwarf’s small system of planets when it picked up a strange signal.

And that’s what a review of the observations in 2020 appeared to find.

There was good reason to be excited.

First, there was the direction it was coming from. Proxima Centauri is too faint to see. But it’s our closest neighbour at just 4.22 light years. And it’s thought to have at least one habitable* planet.

Second, it was persistent*. It was there for several hours. And it wasn’t heard when the 64m-wide telescope looked away every 30 minutes or so.

Third, it was narrowband – a specific 980.002MHz with no spill-over “noise” usually associated with natural events.

Combined, these were a strong set of indicators for a “technosignature” – a non-natural, non-Earth generated radio signal.

But there was a problem. It was never seen again.

That didn’t stop the excitement from boiling over. This, after all, was a potential “Wow!” signal like the legendary 1977 event. The Southern Cross and the pointers Alpha and Beta Centauri, showing the position of Proxima. It cannot be seen by the naked eye. Picture: Martin George

News of the find first hit the media last year.

At first glance, it was precisely what the $133 million Breakthrough Listen Initiative project was looking for.

Founded by Russian billionaire Yuri Milner, its purpose is to scan the skies in the hope of finding traces of extraterrestrial civilisation.

The Australian Parkes radio telescope is just one part of the project. Similar devices around the world devote some of their time to the search.

The Parkes signal was the project’s first real hope of actually having found something. As such, it was named Breakthrough Listen Candidate* 1 (BLC-1).

They were prepared with a variety of equipment to determine everything they could from such a signal. Only such detailed follow-up analysis could confirm that its source was alien, not some kind of unexpected “spoof” or false signal.

But nothing more was seen. The signal was detected at the Parkes Observatory in regional NSW, which hosts a popular family open day each year, Covid restrictions permitting. Picture: John Sarkissian

“If BLC-1 is never seen to repeat, it will be very difficult to conduct the kind of detailed follow-up that will fully convince scientists that it was a message from aliens,” Breakthrough Listen advisory board member Professor Michael Garrett observed earlier this year.

“Sceptics will rightly argue that this is more likely to be either a new form of human-generated radio interference or a rare feature of the complex observing instrumentation itself.”

“The trouble was, we weren’t ready to discuss it,” Curtin University radio astronomer* Dr Danny Price said of the media excitement surrounding the signal. “Last year we had only just started secondary verification tests, and there were too many unanswered questions.”

Decades of false hopes have given SETI and Breakthrough Listen cause for caution. Moments of immense excitement have almost always been followed by a let-down.

“When you’re searching for signs of extraterrestrial life, you want to be very careful about getting it right before you make any announcements,” Dr Price said.

But the Breakthrough Listen project scientist said the search team was now finally ready to discuss the Proxima Centauri signal mystery and two studies published in Nature Astronomy on Tuesday.

“We are ready to report that BLC-1 is, sadly, not a signal from intelligent life beyond Earth. Rather, it is radio interference that closely mimics the type of signal we’ve been looking for,” he said. Steven Spielberg’s fictional character ET from the film ET: The Extra-Terrestrial is still the closest the world has come to a friendly alien encounter.

The signal, and the circumstances under which it was captured, were exhaustively* tested.

Scientists concluded that BLC-1 was most likely interference – intermodulation*, to be exact.

“If you’ve listened to blues or rock guitar, you are probably familiar with intermodulation,” Dr Price said. “When a guitar amp is deliberately overdriven (when you turn it up to 11), intermodulation adds a pleasant-sounding distortion to the clean guitar signal.

“So BLC-1 is – perhaps – just an unpleasant distortion from a device with an overdriven radio frequency amplifier.”

BLC-1 is an effect that has been seen in radio astronomy before.

“Longing for company in the vastness of the cosmos is such a strong human impulse. But there are still reasons to be cheerful about the results of this study. Because the team approached the analysis with such rigour, we know that if there is a future signal which suggests a technosignature, we can rely on the evidence. Now we know a little bit more about what not to look for.” Breakthrough Listen Initiative and SETI remain committed to their search.

Professor Garrett said one way to prevent such “false positives” again is to use two widely separated radio telescopes to search in tandem*. The odds of the same interference affecting both at the same time are incredibly remote. And that would help sift the gold from the dirt.

“The human-made interference that has contributed to so many false positives for SETI, and has included orbiting satellites and even microwave ovens, would completely disappear,” he said.

“By combining their signals using a powerful technique known as Very Long Baseline Interferometry*, we can pinpoint the position of a signal with exquisite accuracy, such as to a single star.”

Regardless of what caused BLC-1, it was not the technosignature they were looking for, Dr Price said.

“It did, however, make for an excellent case study, and showed that our detection pipelines are working and picking up unusual signals,” he said. 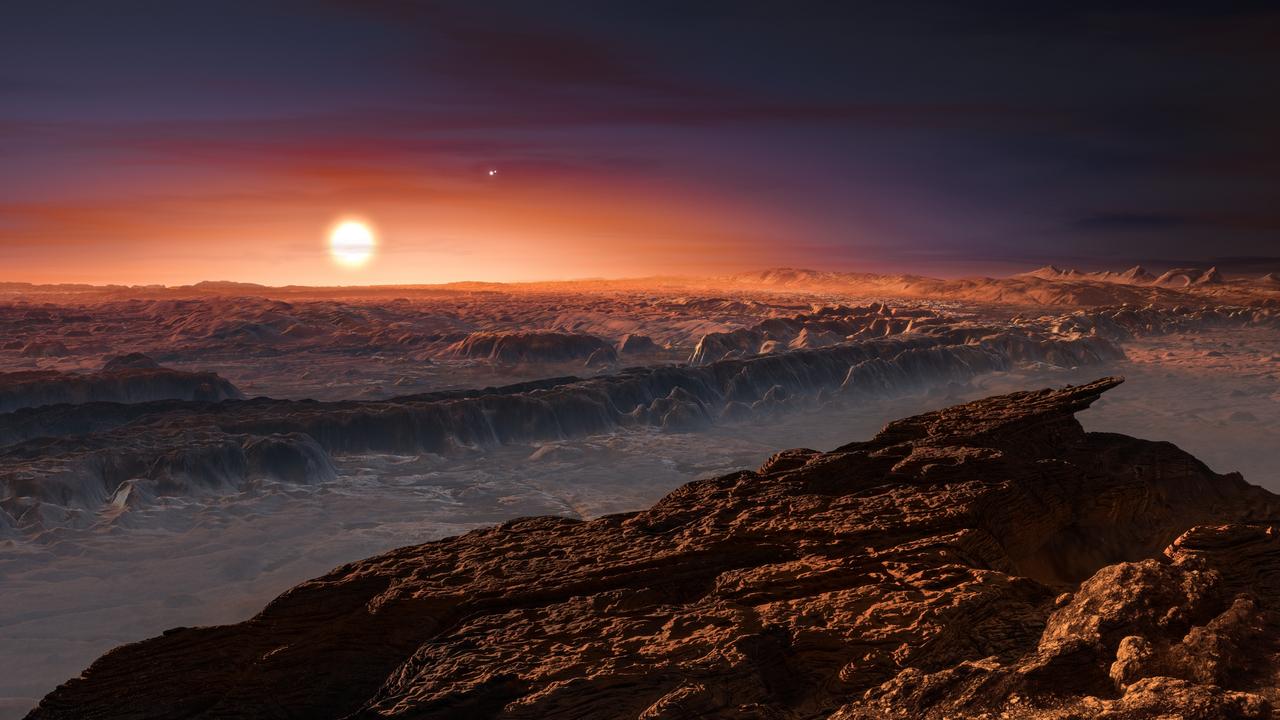 An artist’s impression of a planet in orbit around Proxima Centauri that was discovered in 2016. Picture: ESO/M Kornmesser/Martin George

In the case of nearby Proxima Centauri, even a specific planet could be singled out, though it would require allocating precious time from two radio telescopes. Running such a resource allocation concurrently would add difficulty – plus the immense amounts of data both telescopes receive would also need much greater computing power to combine and sort.

“But none of these issues are showstoppers, especially as technology continues to advance at unprecedented rates,” Professor Garrett said.

CLASSROOM ACTIVITIES
1. Make a list
List the most interesting, strangest and surprising things that you have learned from this story? Next to each item in your list, write a reason why you chose it.

2. Extension
“We have been trying to contact the planet Earth for years. Why won’t they answer us?” Write a story that starts with this sentence.

VCOP ACTIVITY
Imaginative dialogue
Imagine you were there during the event being discussed in the article.