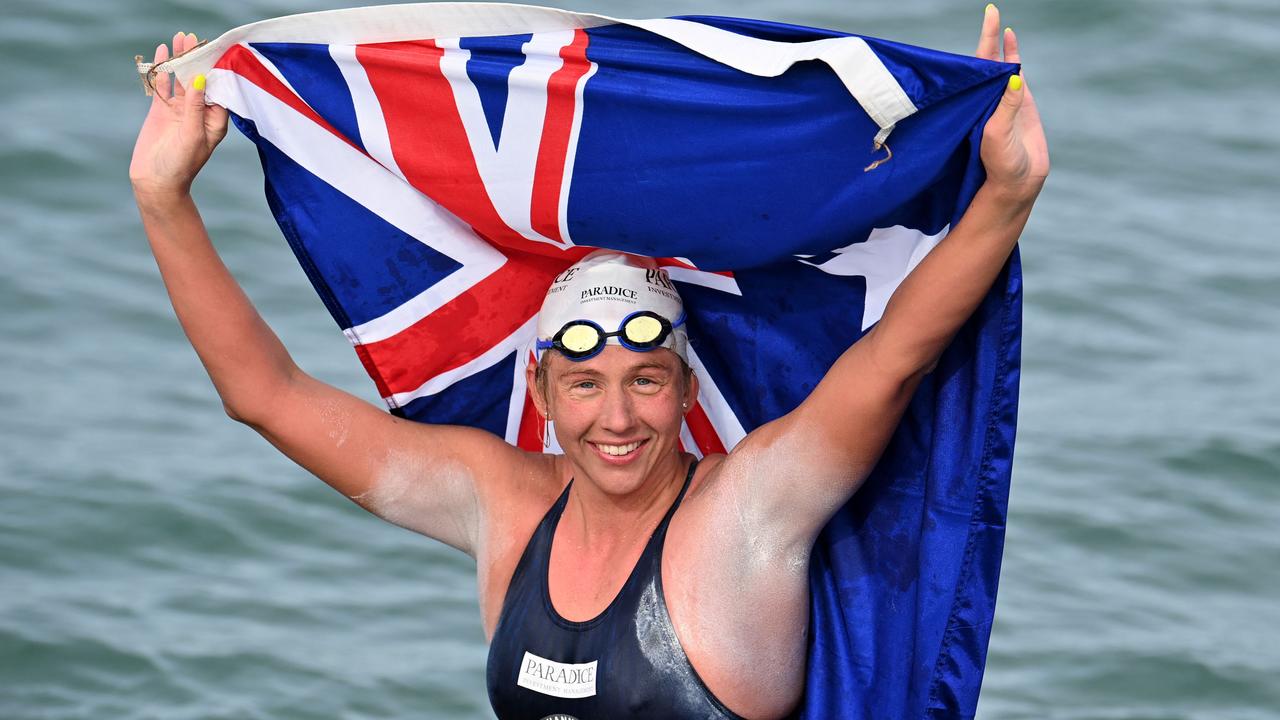 Australian long-distance swimmer Chloe McCardel is the queen of the English Channel after a record breaking 44th crossing.

McCardel, 36, completed her 44th swim of the channel between England and France on October 13, achieving what no other person has done.

Wrapped in an Australian flag, she said: “I’ve been waiting a long time to celebrate this swim.

“I am ecstatic*, I have so much adrenaline* and I am proud to finally be queen of the English Channel.

“It feels like my channel journey is complete after 12 years and it feels great.” Chloe McCardel holds up a giant 44 to celebrates her record breaking swim across the English Channel. Picture: AFP

McCardel set off from the English coast in the early hours and took about 10 hours to swim almost 34km to Pointe de la Courte Dune near Calais in France.

The English Channel is one of the world’s busiest shipping lanes and as well as having to deal with passing cargo ships and ferries, changing tides and waves can add extra distances for swimmers.

McCardel, who grew up in Melbourne but lives in Sydney, went ahead with her record-breaking swim despite writing on Facebook two days earlier that she was “battling a chest infection”.

Despite that, she said after the gruelling* challenge that she felt “really good”.

“Today, the conditions were very favourable and the sun even came out, which is rare for October in England,” she said.

“I was concerned my chest infection might affect my swim but I felt really good. Aside from some 1m waves earlier, the last few hours were very flat so I got to just enjoy the swim and soak it all up. Chloe McCardel is pictured during her 10-hour swim across the English Channel for a world record 44th time. Picture: AFP

“I have had immense* support back in Australia. I want to thank everyone across the country who has supported me.

“I hope to be an inspiration to anyone who wants to set big goals or is working hard to achieve things.”

McCardel first swam across the English Channel in 2009. She passed the men’s record for the most channel crossings, held by British swimmer Kevin Murphy, with her 35th swim in August last year.

And just a week ago she equalled the overall record of 43 channel crossings, which had been held by British swimmer Alison Streeter since 2004.

Another swimming career highlight was making the longest Marathon Swimmers Federation-approved unassisted solo ocean swim in history, covering 124km in the Bahamas, in 2016.

CLASSROOM ACTIVITIES
1. Be Inspired!
What makes Chloe a great role model for kids like you? Design a card or poster that shows all of the things that you can learn from, and be inspired by, Chloe’s achievement.

2. Extension
Imagine that you are a reporter for Kids News. You are going to interview Chloe. The purpose of your interview is to help the readers of Kids News to understand exactly what it would be like to swim 124kms, like Chloe did in 2016. Write five questions for your interview. Then write the answers that you think that Chloe would give.

VCOP ACTIVITY
Imaginative Dialogue
Imagine you were there during when Chloe McCardel completed her record 44th swim across the English Channel.

Create a conversation between you and Chloe McCardel. Don’t forget to try to use facts and details from the article to help make your dialogue as realistic as possible.