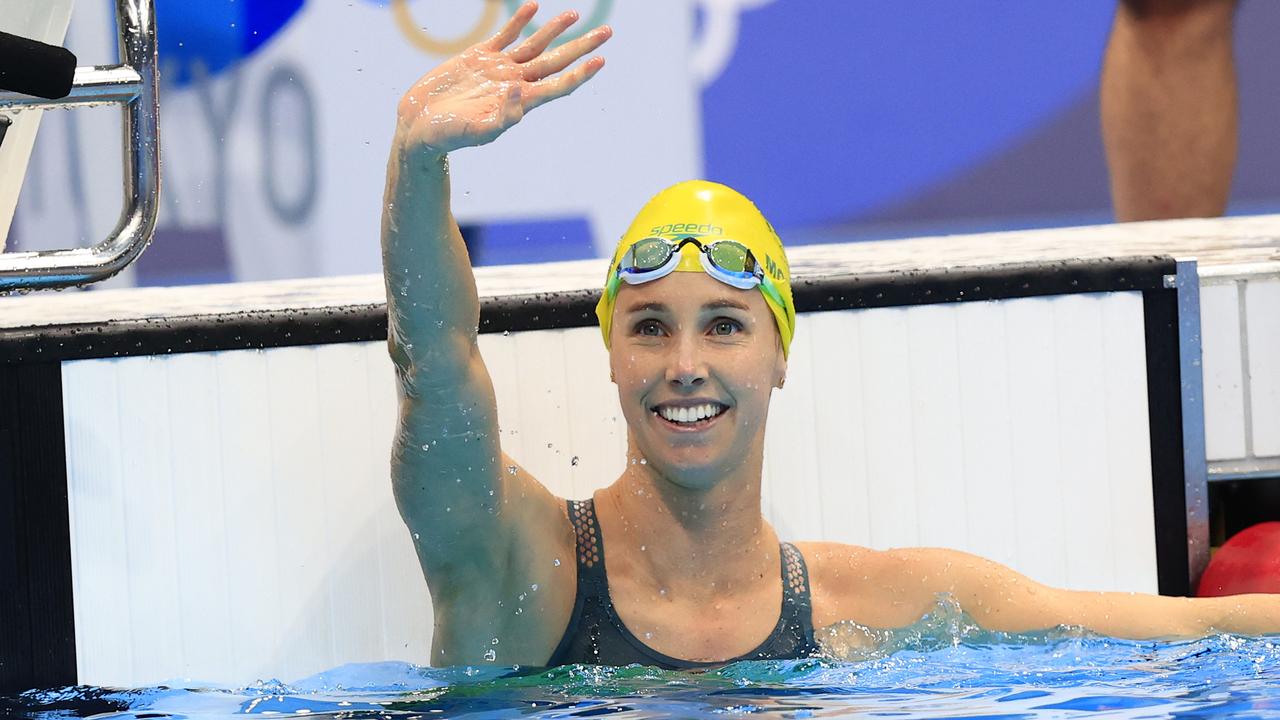 Australia is celebrating its best day in Olympic history, winning four gold medals in one day for the first time.

Two golds came in the pool and one each on the BMX track and in sailing.

We also crowned a new Olympic queen, with swimmer Emma McKeon becoming our greatest Olympian when she added two more gold medals to her collection on the final day of swimming at the Tokyo Games.

McKeon’s first gold of day nine came in the 50m freestyle and was quickly backed up by victory in the 4x100m medley relay*.

These two golds took her Tokyo medal tally* to seven, making her the first woman to win seven medals at a single Olympic Games since 1952.

McKeon, 27, now has a total of 11 Olympic medals from two Games, passing the nine won by swimming greats Leisel Jones and Ian Thorpe. Emma McKeon with the gold medal she won in the 50m freestyle final. Picture: Getty Images

“It’s very surreal* to be in that kind of company,” McKeon told Channel 7.

“I do not usually say these thing like this but I wanted to win, I came here for gold. That’s what we worked on and to finish now and I’ve got, what, four of them, I can’t believe it.”

McKeon’s win in the women’s 50m freestyle final on day nine of the Tokyo Olympics was also an Olympic record. She touched the wall in 23.81sec, ahead of Sweden’s Sarah Sjostrom in second place and Denmark’s Pernille Blume in third. Cate Campbell, who was Australia’s joint flag-bearer at the opening ceremony, finished fifth in the race.

McKeon and Campbell then joined teammates Kaylee McKeown and Chelsea Hodges in the 4x100m medley relay to claim another gold in another Olympic record time of 3min 51.60sec.

McKeown, who also took gold in the 100m and 200m backstroke events, led the team off in the backstroke leg. Hodges followed in the breaststroke leg, then McKeon in butterfly, before Campbell brought it home in the freestyle leg. “Oh my gosh. I still just can’t believe that we just did that. That is an incredible effort by everyone,” Campbell told Channel 7 moments after the relay victory.

“I think that obviously I was a little bit disappointed with my 50 freestyle earlier, but I just kind of told myself that you find out what you’re made of in the times when things don’t go your way … not when things are working well for you.

“And I took that mindset into this race and I just thought, ‘You have to be brave and get back out there.’ And I am just absolutely blown away.” The relay team’s victory delivered Australia’s ninth swimming gold medal in Tokyo – our most successful performance in the pool ever at an Olympics, surpassing* the eight gold medals won by our swimmers at the 1956 Melbourne Games.

And by taking home seven medals from Tokyo, McKeon equalled the record for the most medals won at a single Olympics by a female athlete. She joins Russian gymnast Maria Gorokhovskaya, who won seven medals in 1952. Martin, 27, nailed the BMX freestyle gold with his first run, letting loose with a spectacular array of high-flying flips, tricks and somersaults, and at one stage letting go of the handlebars and spreading his arms as if in flight.

The Queenslander, who spent $70,000 to build a world-class skatepark in his backyard to prepare for his first Games, said he played it safe on his first run.

“That was my safety run, I didn’t even do any of my bigger tricks on the box jump or on the spine,” Martin said.

“I honestly just wanted to lay down a good first run with the tricks I knew I could do.”

The plan paid off. The two-time world champion, three-time national champion and star of the X Games circuit scored a huge 93.3 on his first run, putting him at the top of the leaderboard.

His closest rival was Venezuela’s Daniel Dhers, who scored a 92.05 on his second run, which meant Martin didn’t need to complete a second run to win gold. Wearn was also in a dominant* position going into the final sailing race of the men’s laser event. He only needed to finish the final race after securing the gold in the second last round two days earlier.

He came in second in the final race, confirming his overall gold medal placing and Australia’s fourth gold medal of day nine.

CLASSROOM ACTIVITIES
1. Interview with a medallist
What a performance from Emma McKeon! Imagine you are a sports presenter covering the Olympics and are given the task of interviewing her following one of her medal winning performances. Make a list of questions you would ask.

2. Extension
What interview questions would you ask one of the competitors that Emma McKeon beat? Remember to show sensitivity in your questioning because they might feel a little bit disappointed with the their result.

VCOP ACTIVITY
1. Athlete profile
It’s time to shine a spotlight on our Olympic athletes. Create a template for a character profile that you can fill in with all the information you want to know about some of our athletes. Make sure the layout has subtitles, and perhaps questions under each subtitle, to help you fill it in.

2. Extension
Let’s test your layout. Can you use the character profile layout and fill it in with information about yourself? Check to see if you included enough categories. Will we learn a lot about you, or do you need to add more sections? Share your fact file with your class, so they can learn more about you.