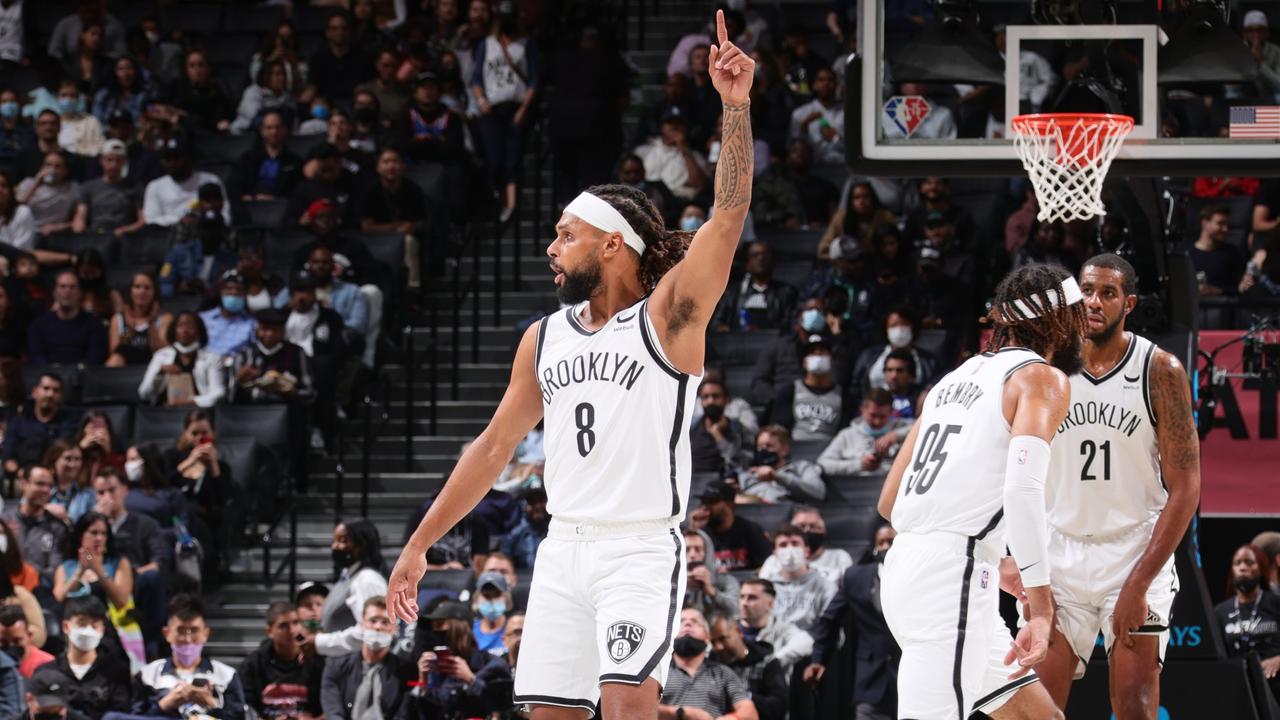 Is NBA star Patty Mills Australia’s number one basketballer ever? Boomer legend Andrew Gaze has called it. Mills is pictured here playing for the Brooklyn Nets in front of the home crowd at a pre-season game on October 8. Picture: NBAE via Getty Images

Basketballer Patty Mills is so popular he could probably run for Australian prime minister and have a good chance of winning.

It’s a big call, given the championship success of Aussie pioneer* Luc Longley and Andrew Bogut’s rise from No. 1 draft pick to a title.

But according to Australia’s best domestic* player, Mills is up there in contention* as our nation’s greatest NBA talent. And the numbers suggest that Gaze has a point.

Mills is Australia’s most capped NBA player with 739 games to his name, spanning 12 seasons in the world’s best league.

He won a championship with San Antonio in 2014 and has provided consistent contributions off the bench since, including bringing home that historic bronze medal for Australia at the Tokyo Olympics. 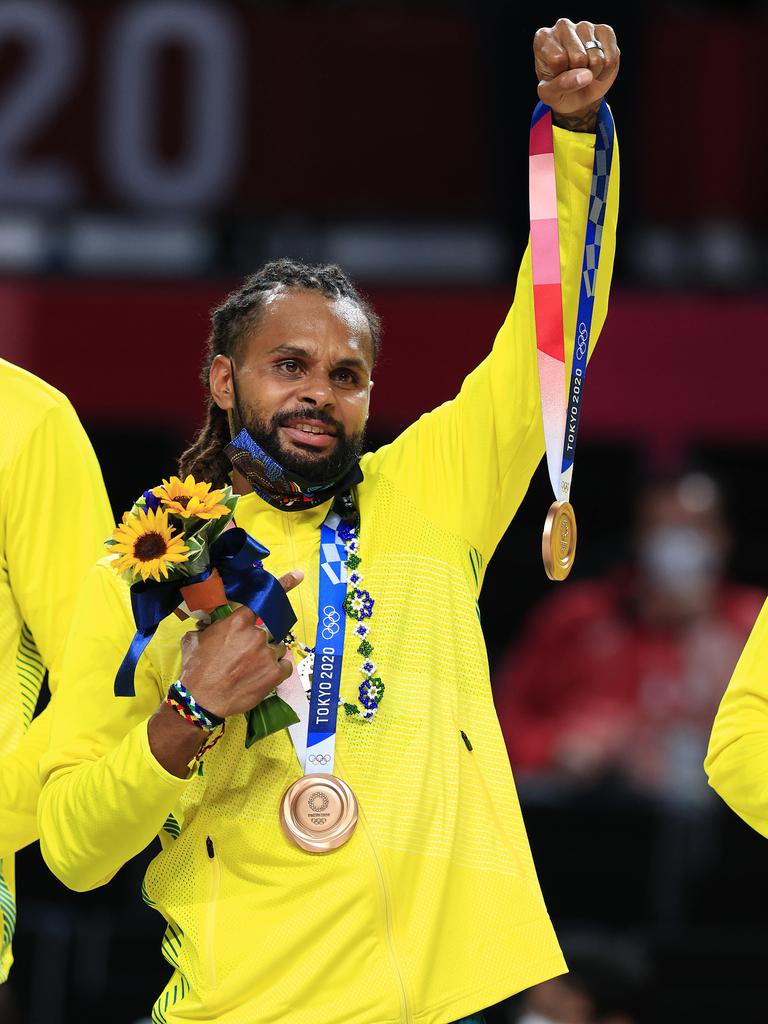 Nonetheless, Mills is behind Longley in the championships category, given Longley collected three titles alongside Michael Jordan at the Chicago Bulls – which is why many rate Longley as Australia’s finest. But the gap between the pair is tight, according to Gaze.

With Mills a strong chance to add a second championship in a star-studded Brooklyn Nets side this season, Gaze said the Boomers veteran* is on track to finish his career as Australia’s greatest NBA player.

“I think you could put Patty in there (in top spot) right now,” Gaze said.

“He has won an NBA title and (consider) his numbers, longevity* and his contribution to his team. 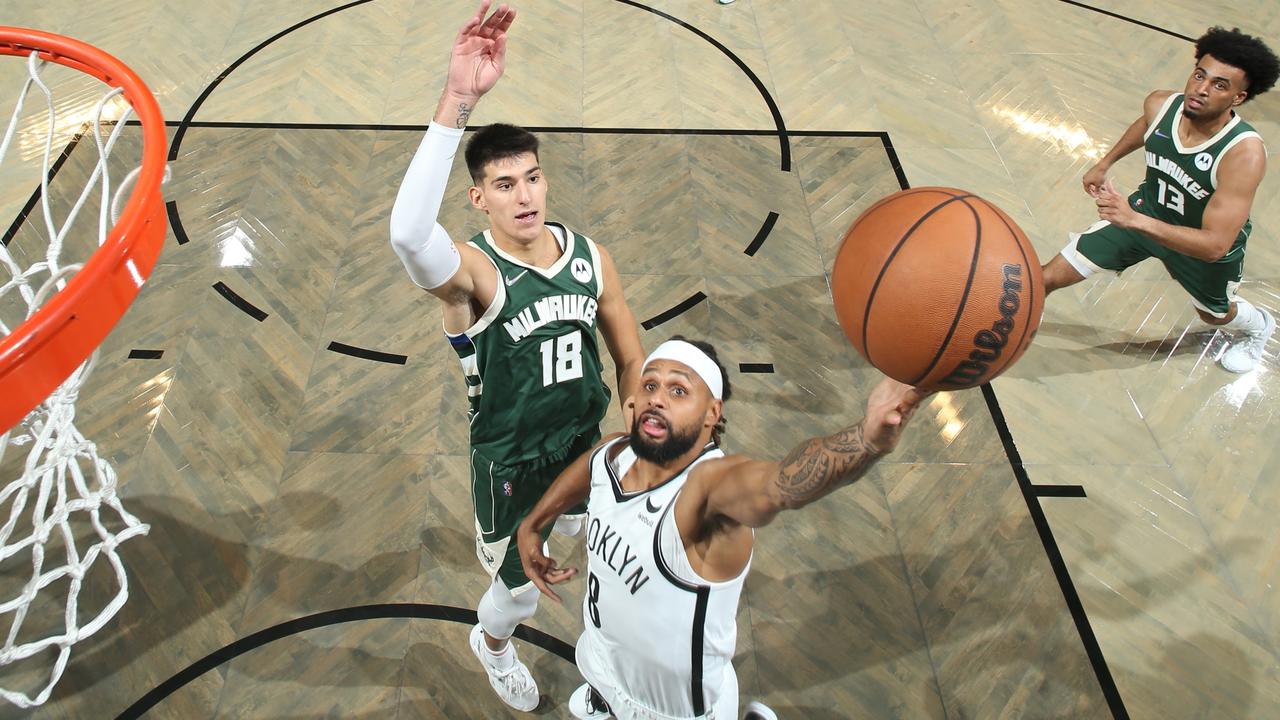 Patty Mills drives to the basket during a pre-season game for the Brooklyn Nets against the Milwaukee Bucks on October 8 at Barclays Center in Brooklyn, New York. Picture: NBAE via Getty Images

Mills started the next phase of his glowing career on Wednesday, with his Brooklyn side taking on last year’s NBA champions Milwaukee in a blockbuster season-opener.

The Boomers fan favourite is expected to take on a bigger role at the Nets this season, especially with star guard Kyrie Irving out indefinitely* due to his refusal to be vaccinated against Covid-19.

Brooklyn has options with Joe Harris in the back-court alongside James Harden, but Mills will still be relied upon heavily.

The Nets will look to the 33-year-old to produce strong impact off the bench, like he did at San Antonio last season when he averaged 10.8 points, 2.4 assists and shooting 37.5 per cent from range.

Mills will also take confidence from his brilliant Tokyo Olympic campaign for the Boomers, where he averaged 23.3 points and 6.3 assists on his way to collecting the bronze. 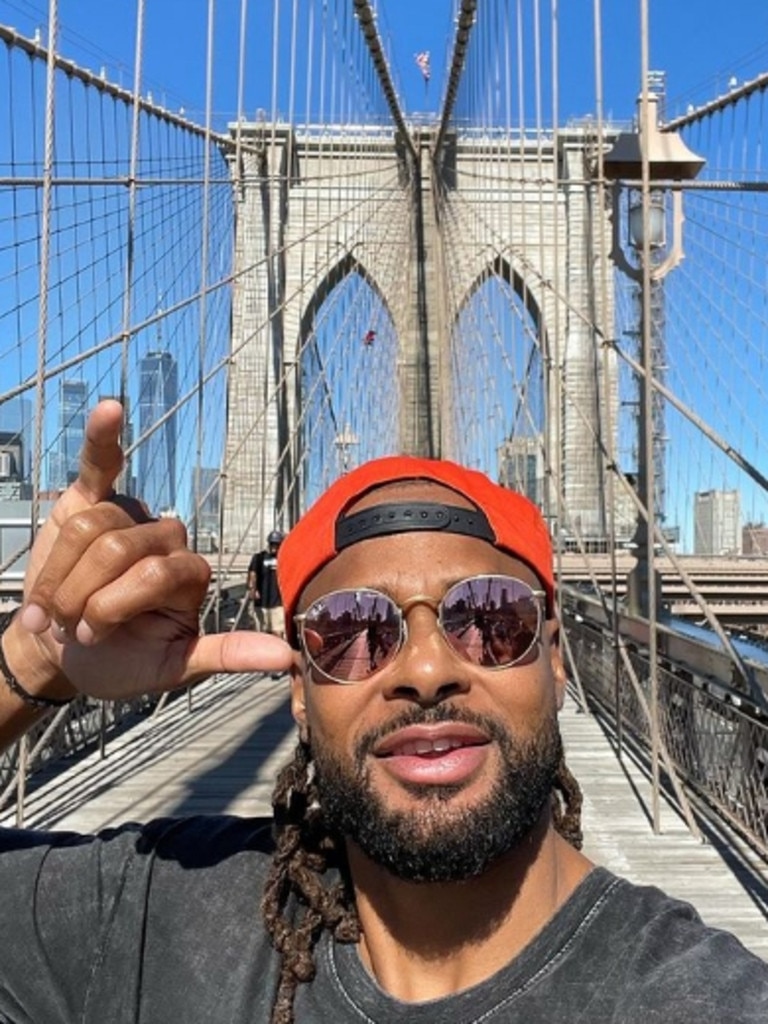 Mills has only been at Brooklyn for just over a month, but he is already impressing, according to his former Spurs teammate LaMarcus Aldridge.

“He’s huge – he’s a guy that comes in, he brings that positive energy,” Aldridge said.

“This is my third team with him, so I’ve definitely seen him grow. But he’s an offensive threat, a competitor, brings the energy and juice off the bench. Can get going in pick-and-roll, makes the right reads – I just think he’s going to be huge for us, just adding more shooting to the line-up.”

Nets coach Steve Nash believes Mills will excel once he becomes accustomed to his new teammates.

“He brings a lot to our team, leadership in general, character, IQ, pace of play, skill level,” Nash said. “He’ll find himself and I think he’s going to be really good for us.” That kind of rousing endorsement is not being echoed in nearby Philadelphia, where fellow Aussie NBA player Ben Simmons continues his troubled run with the Philly 76ers.

Simmons was sent home from training in disgrace and will miss the 76ers’ season-opener against New Orleans on Thursday because of “conduct detrimental* to the team”, according to the official statement.

Multiple US reports said Philadelphia coach Doc Rivers dismissed Simmons from the session when he refused to participate in drills.

“I thought he was a distraction today,” Rivers said later. “I didn’t think he wanted to do what everyone else was doing.

“My job as a coach is to keep trying to get guys to buy in … that’s my job. I’m not going to stop my job. We told him to go home. Hopefully at some point (he’ll show a better attitude)”.

Simmons has made it clear he wants to be released from Philadelphia, despite four years and $200 million (AUD) remaining on his contract.

However, the 76ers won’t let him leave without securing a genuine star replacement and the team hasn’t been offered an attractive enough trade package so far.

While supporters hoped his unexpected return to training signalled an improved attitude, regrettably it now appears Simmons has only come back to hasten* his exit. CLASSROOM ACTIVITIES
1. Acrostic Poem
Write an acrostic poem about Patty Mills, using things that you know about him from this article, or that you already knew about him if you are a fan.

2. Extension
The article compares some of Australia’s greatest basketballers and brings us to ponder which of them should be considered the best ever. Do you think that question can be answered? Do you think it matters? Why or why not? Write a paragraph to explain your thinking.

VCOP ACTIVITY
Imaginative Dialogue
Imagine you were there during an event discussed in the article, or for the interview.