Mark Knight’s cartoon shows the new sport of BMX freestyle has fitted right in at the Tokyo Olympic Games.

Aimed squarely at the popular extreme sports end of the market, these wicked new events have included rock climbing, surfing and skateboarding.

Sporting traditionalists were spewing at the thought of a counterculture* skateboard rider being awarded an Olympic gold medal, but millions of people around the world are into skateboarding, compete in tournaments and follow its stars on social media.

Enter the freestyle BMX event, where an Australian by the name of Logan Martin did things on a bicycle that were beyond belief.

In the past, we have admired the gymnasts who flip and tumble, vault and somersault then land like a cat. Logan does it on a BMX bike, defying* gravity and my old theory that what goes up, usually comes down pretty hard and in many broken pieces!

But not the young man from Queensland, who went on to win the gold medal and open the eyes of many who were unaware of the skills involved in these sports. They are athletes of the 21st century!

I was inspired to draw a cartoon about Logan Martin and his somersaulting BMX routine that won him gold.

I wanted to make a comment about how these new sports that had entered the Olympics did not detract* from the prestige* of the Games, but actually added to its inclusivity*.

As we all know, the symbol of the Olympics is the five interlinked coloured rings, an unmistakeable graphic. It adorns all the arenas at the Olympic events.

When I was watching the BMX on television, the bike riders seemed to hang in the air and there in the background was the Olympic symbol. 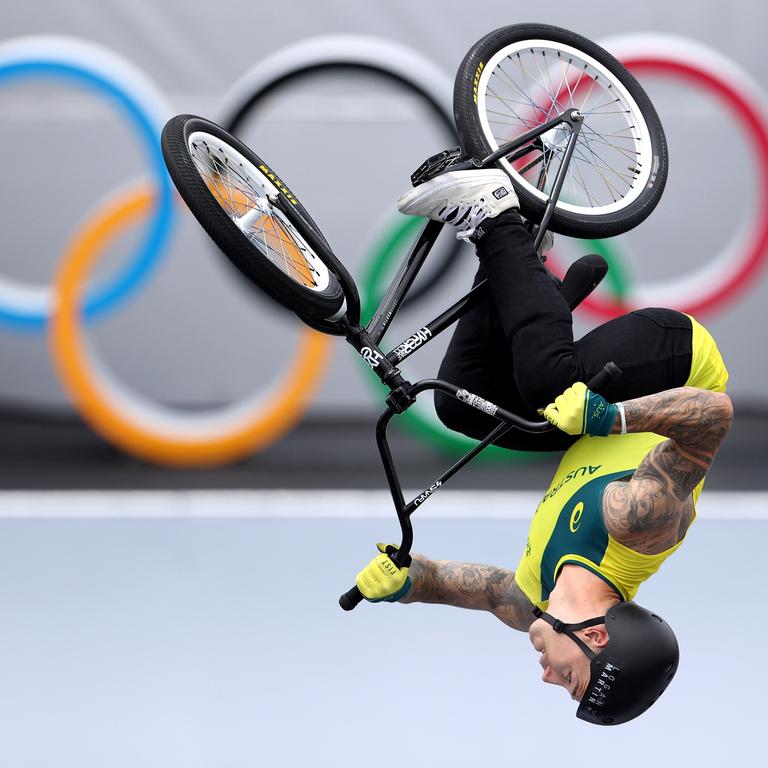 One of the images of Logan Martin competing that inspired Mark Knight’s cartoon. Picture: Getty Images

For a moment the rider and the symbol seemed to be pasted together. I saw a visual connection between the five rings and the wheels of the BMX bikes.

I did some rough sketches, firstly of Logan riding a five wheeled bike, with all the Olympic rings as his wheels. I laughed, but the drawing was kind of crazy and confusing.

Then I had a few cyclists in the air at once, with their wheels forming the Olympic logo. Not bad, but still too messy!

Finally, I drew Logan on his own, in the air somersaulting in front of the Olympic rings with two of his wheels forming part of the famous logo. Much simpler, but it worked!

The secret to great graphic design is simplicity, which I adopted for this cartoon! Mark Knight’s cartoon melds Logan Martin’s BMX bike with the Olympic rings to show how the new sports became an important part of the Games.

By melding* the Olympic symbol and the BMX bike together, the cartoon attempts to show how these new sports have become an integral* part of the Olympic Games, an event which helps to unite the world by bringing together athletes of all colours, creeds and sports every four years.

Why Mack’s small gesture had a giant impact

CLASSROOM ACTIVITIES
1. Write a Jingle
The next Olympics will be in Paris in 2024. Can you think of another five things that could make the Paris Olympics even more attractive to kids? These could be new sports, ideas for uniforms, logos, symbols, Opening and Closing Ceremony activities/events, advertisements – anything at all!

Describe or design your ideas in as much detail as you can.

2. Extension
Choose another Olympic Sport. Be inspired by Mark’s cartoon to create your own cartoon that celebrates the sport and the Olympic ideals. The only rule is that your cartoon must include the Olympic rings symbol.

VCOP ACTIVITY
Target Your Audience
A good advertisement encourages you to believe in what they are promoting. They might be selling products, offering a service, asking you to join up, or asking you to change your beliefs, just to name a few. A logo is a designed that represents everything the company stands for. It is a symbol that we are supposed to identify the company by, without them having to say anything. Think of a popular company like the golden arches of McDonald’s, or Facebook’s white F in a blue circle.

Create a new logo for a popular company to update their brand, or create a completely new business idea, complete with logo.

After you have created the logo, you need to create a pitch to sell your new design to the company. You will need to talk about what your logo represents, who is your target audience, and why they should update their logo to your idea.

If you are creating the business from scratch, you will also need to include what the new business is about, so that we understand what they do and why.

Don’t forget to use your VCOP skills to add voice to your pitch, and practise reading your pitch out loud to check it sounds right. Remember to use lots of expression through your sentence structure, word choices and punctuation.