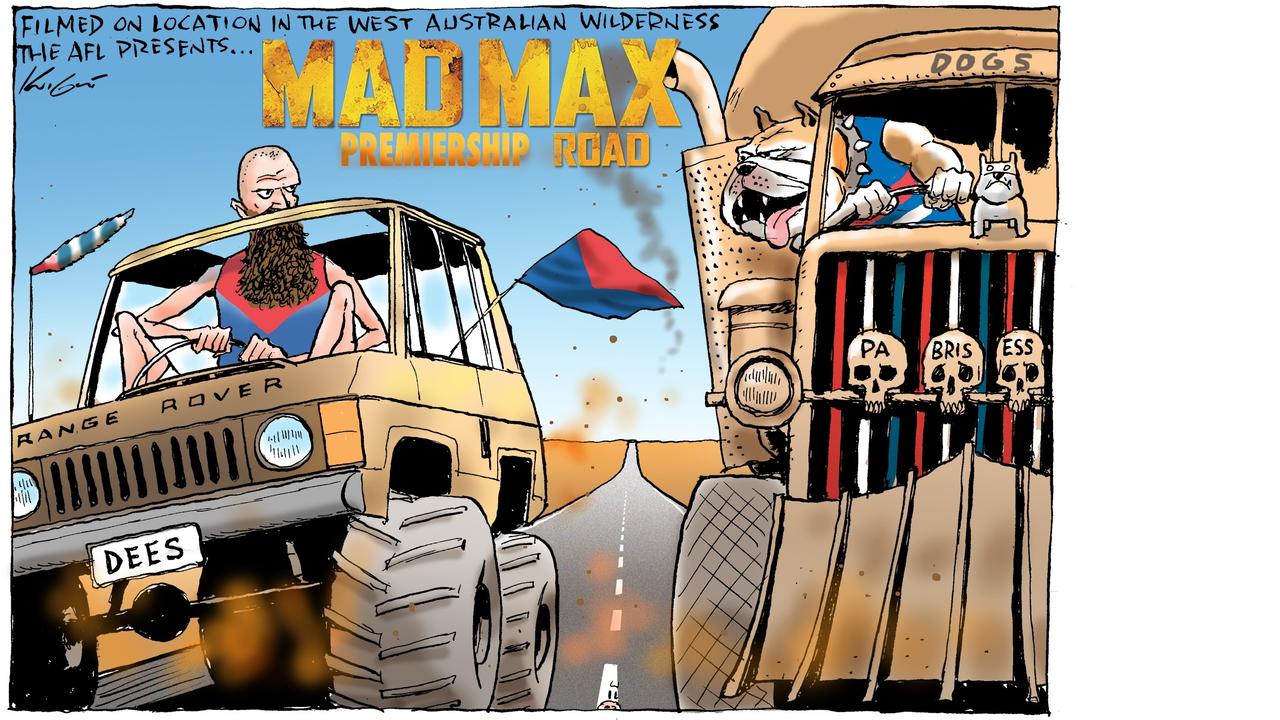 As we approach football finals season I am starting to find myself sketching more and more footy players. And what a rich source of material they are, in particular the AFL mob.

This year’s AFL Grand Final is being played in Perth for the first time due to the Covid-19 lockdown in Melbourne.

We will see the Melbourne Demons, who haven’t won a flag for 57 years, up against the Western Bulldogs, the working class club from Melbourne’s west.

The Demons, or “Dees” as they are known, are led by their towering captain, Max Gawn, who put in a remarkable performance to get his side into the Grand Final.

The “Doggies”, aka the Western Bulldogs, also put in a great performance, defeating the much favoured Port Adelaide side to progress to the big dance*.

As a matter of tradition, when the two teams qualify for the Grand Final, I draw a cartoon about it for the paper.

So where do I start with this one? Firstly, I would be taking in those points I just mentioned, like Max Gawn. He is interesting to draw with his shaved head and huge Ned Kelly like beard. Then there is the joke made about Melbourne supporters that they are all Range Rover drivers from Melbourne’s posh eastern suburbs!

Add to that the fact they are up against a club from the industrial side of Melbourne and finally, there is the small fact that the game is being played in Perth, which is a very long drive from Melbourne through the desert across the far stretches of the Nullarbor Plain!

In my cartoons I like to employ visual metaphors* to help convey complex ideas and concepts that people might not usually understand. I like to draw upon these metaphors from our popular culture, like well known movies, TV shows and books. For example, drawing former US President Donald Trump as Darth Vader in a Star Wars type scene to describe a political situation. 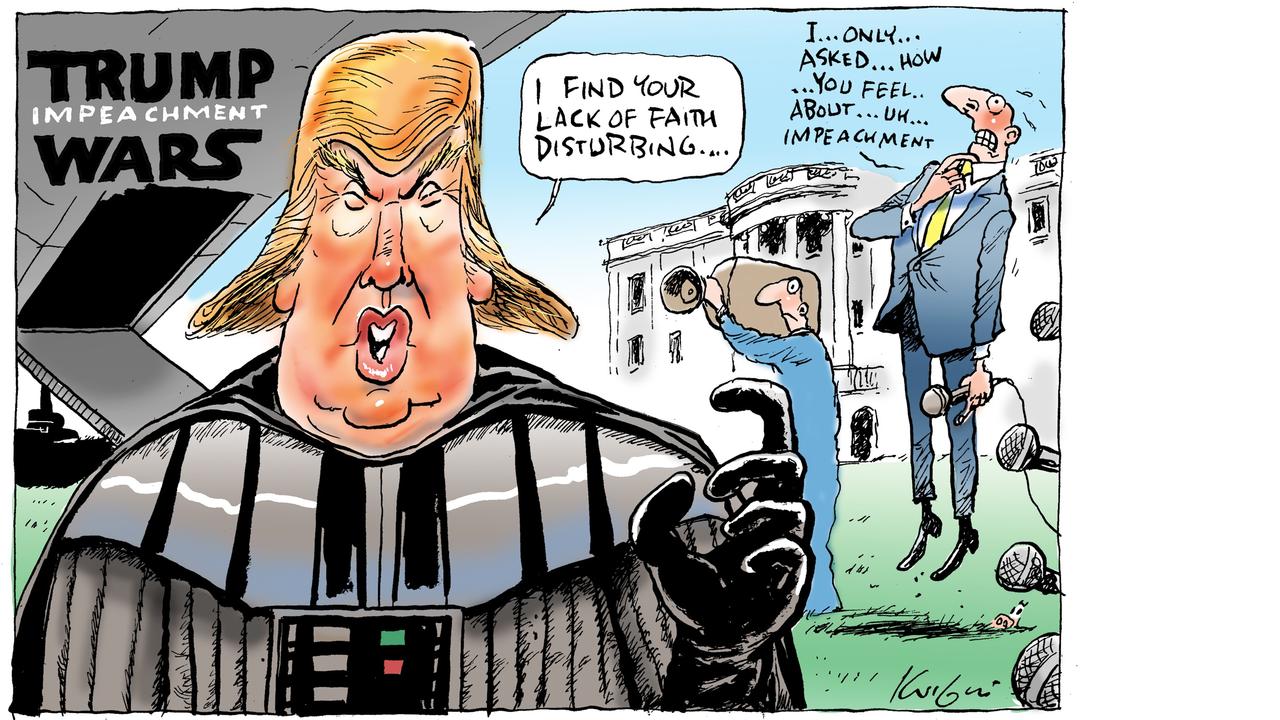 Mark Knight likes to draw on metaphors from movies to use in his cartoons, like this one about former US President Donald Trump.

So when I was thinking about a cartoon about this year’s AFL Grand Final teams, I poured all those ingredients into my brain and pressed the blend button on my imagination and presto, an idea appeared!

What came out was a concept using the Australian movie Mad Max as a metaphor for the big game.

I saw Max Gawn as Mad Max, racing across the Nullarbor in an outrageously exaggerated Range Rover like in a scene from the movie.

By his side is a snarling Bulldog at the wheel of a similarly over-the-top truck in Bulldogs club colours.

Paying close attention to small details from the movie, I added in the skulls of the teams the Doggies defeated in the finals on the truck’s bullbar, a Melbourne flag flies from the Range Rover, and there is a huge plume of orange dust as they race down a long stretch of highway on the way to the Perth stadium. 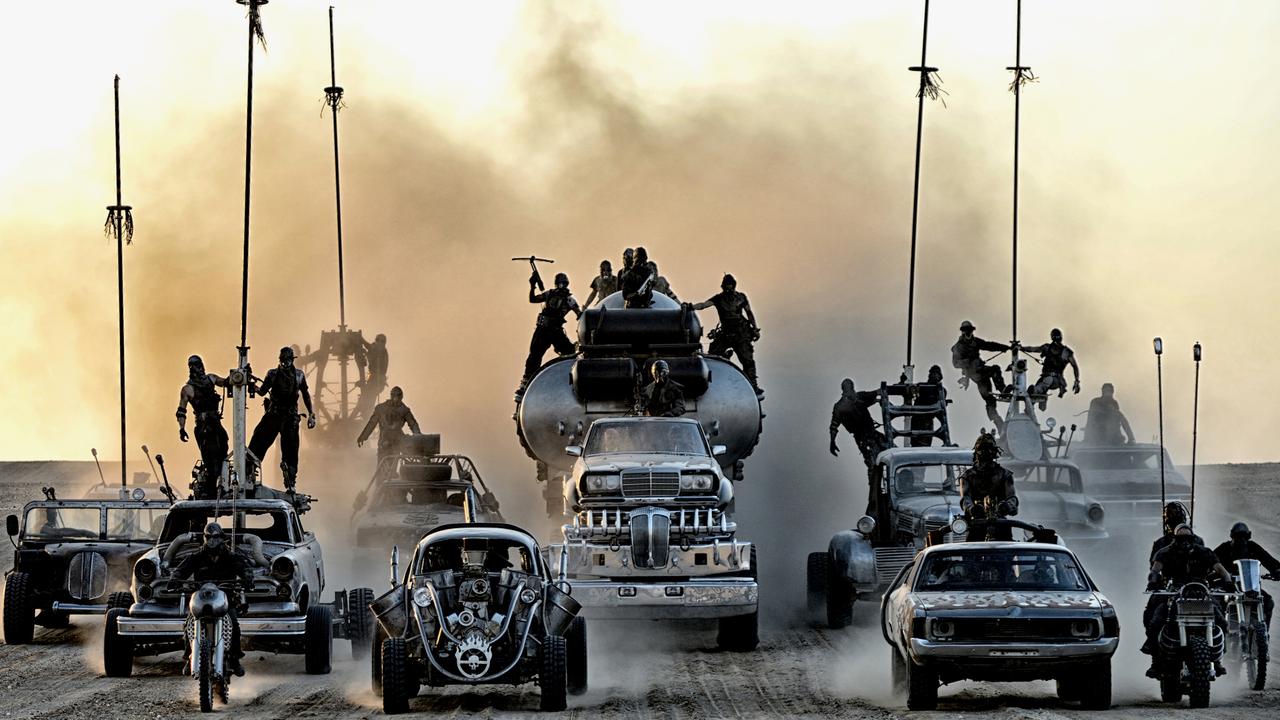 A scene from the movie Mad Max: Fury Road.

Last of all I drew the movie title: “MAD MAX: PREMIERSHIP ROAD”, which is a play on the actual move title, Mad Max: Fury Road.

The cartoon paints a picture that looks like a life and death situation, which it probably feels like if you are a Dees or a Doggies supporter. We take our sport seriously in Australia!

Travelling in style all the way to Perth