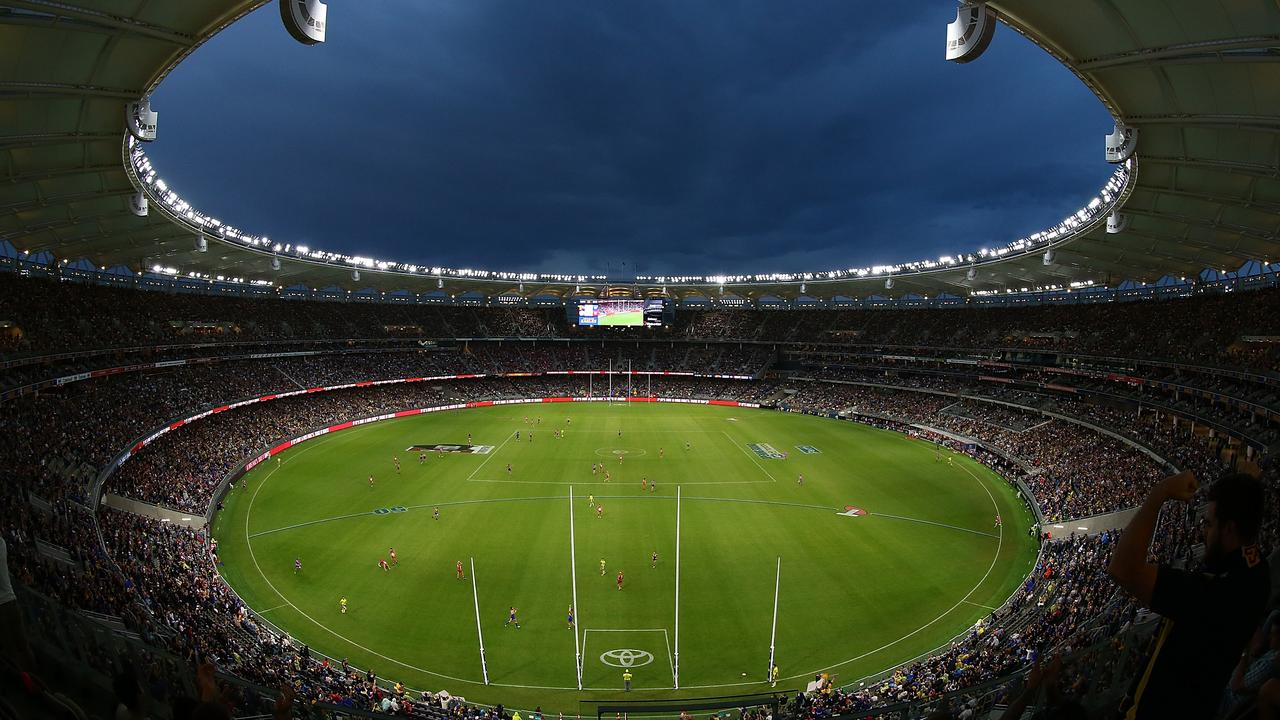 Perth Stadium in WA will host the 2021 AFL Grand Final after Covid-19 outbreaks and restrictions forced it out of Victoria for the second year running. Picture: Getty Images

It’s official, this year’s AFL Grand Final will be played in Perth.

AFL boss Gillon McLachlan confirmed on Tuesday afternoon that the game’s biggest match would be held outside Victoria for the second year in a row after the state’s ongoing Covid-19 outbreak made it impossible for it to be played at the MCG with a crowd.

The Brownlow Medal function, to announce the best and fairest player of the season, will also be held in Perth, kicking off a week of celebrations leading into the Grand Final on Saturday, September 25. The 2021 premiership cup will be presented to the winning team after the Grand Final in Perth. Picture: AFL Photos via Getty Images

Victorian Sports Minister Martin Pakula joined McLachlan for the announcement, saying it was not safe to rush crowds back to the MCG in less than a month.

The official announcement came as no surprise, with the AFL previously saying it wanted to play the Grand Final in front of a crowd.

McLachlan said the announcement was “not what any football loving Victorian wanted to hear”.

“But the health and safety of the wider community has been a priority throughout this season and must continue to be the priority as we all navigate* through this pandemic,” he said.

“We will be back at the MCG, bigger and better in 2022. I do want to acknowledge our supporters who have stuck by the game and stuck by their clubs in record numbers throughout the uncertainty this year. The connection they have with their clubs is unmatched in world sport.” 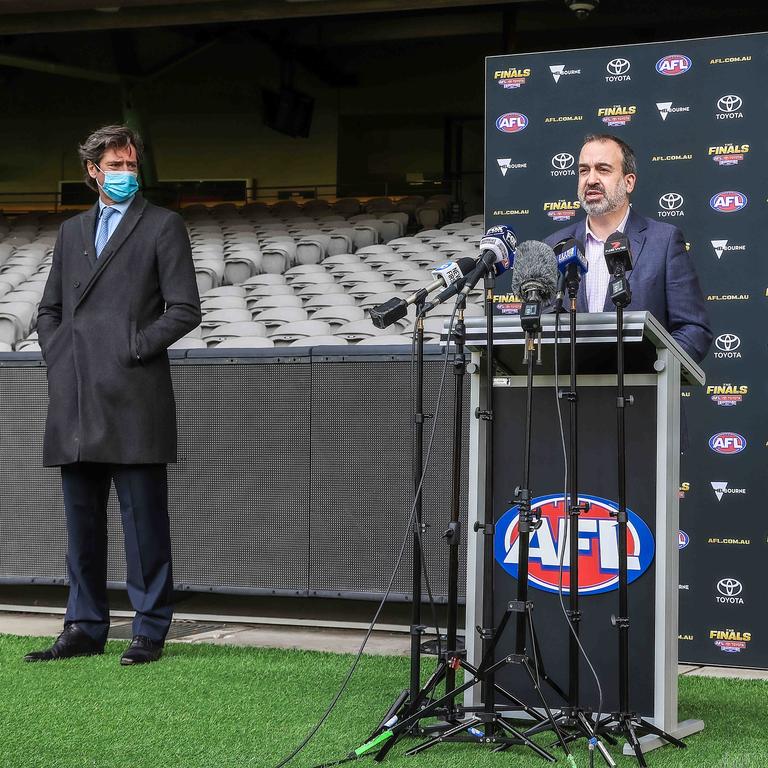 A start time is yet to be confirmed but the Grand Final is likely to be a twilight* event at Perth Stadium. With Perth two hours behind, this would mean a 7pm or 7.30pm start in Victoria and other eastern states.

This year’s NRL Grand Final is also on the move because of Covid-19, with an announcement expected within days to confirm the match will be relocated from NSW to Brisbane’s Suncorp Stadium on Sunday, October 3.

Matches in the first round of the AFL finals were played in Adelaide and Tasmania last weekend as Victoria remained in lockdown after the highly infectious Delta variant of Covid-19 leaked out of NSW.

This Friday night, Geelong will tackle Greater Western Sydney in Perth, while Brisbane will play the Western Bulldogs on Saturday night.

The preliminary finals will be in Perth and Adelaide the following week, on September 10 and 11, and these matches are expected to be followed by a pre-Grand Final bye. 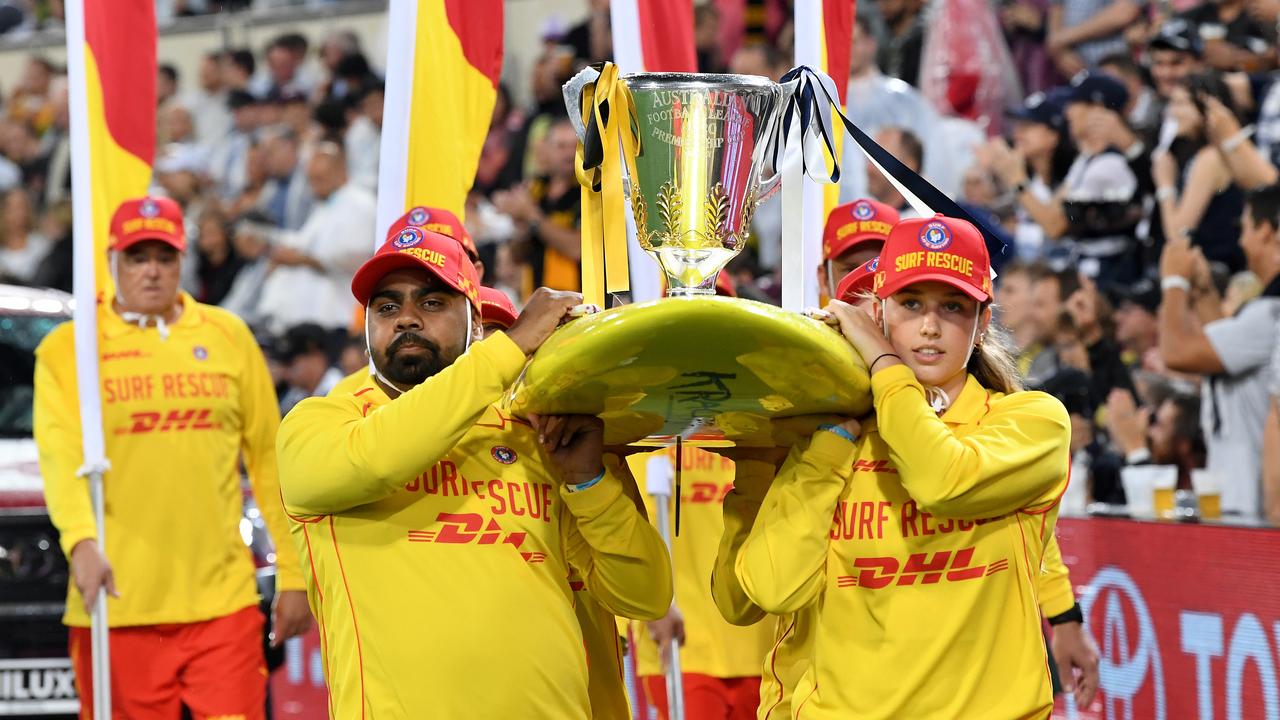 The 2020 Grand Final gets the Queensland touch as surf lifesavers carry the premiership cup into the Gabba for the match between Richmond and Geelong. Picture: AFL Photos via Getty Images

It is the second consecutive* year the AFL’s showpiece* match has been moved out of Victoria because of Covid-19 outbreaks and restrictions. It was played at the Gabba in Brisbane last year, the first time the AFL decider had been staged outside Victoria and the first time it had been played at night.

Richmond defeated Geelong in that Grand Final to claim its third flag in four years.

2. Extension
Imagine you are the WA Premier, Mark McGowan, and you are negotiating with the AFL to bring the Grand Final to Perth.

Write the speech you will give the AFL to convince it that Perth is the best option for the 2021 Grand Final.