Dutch runner Sifan Hassan was down but not out 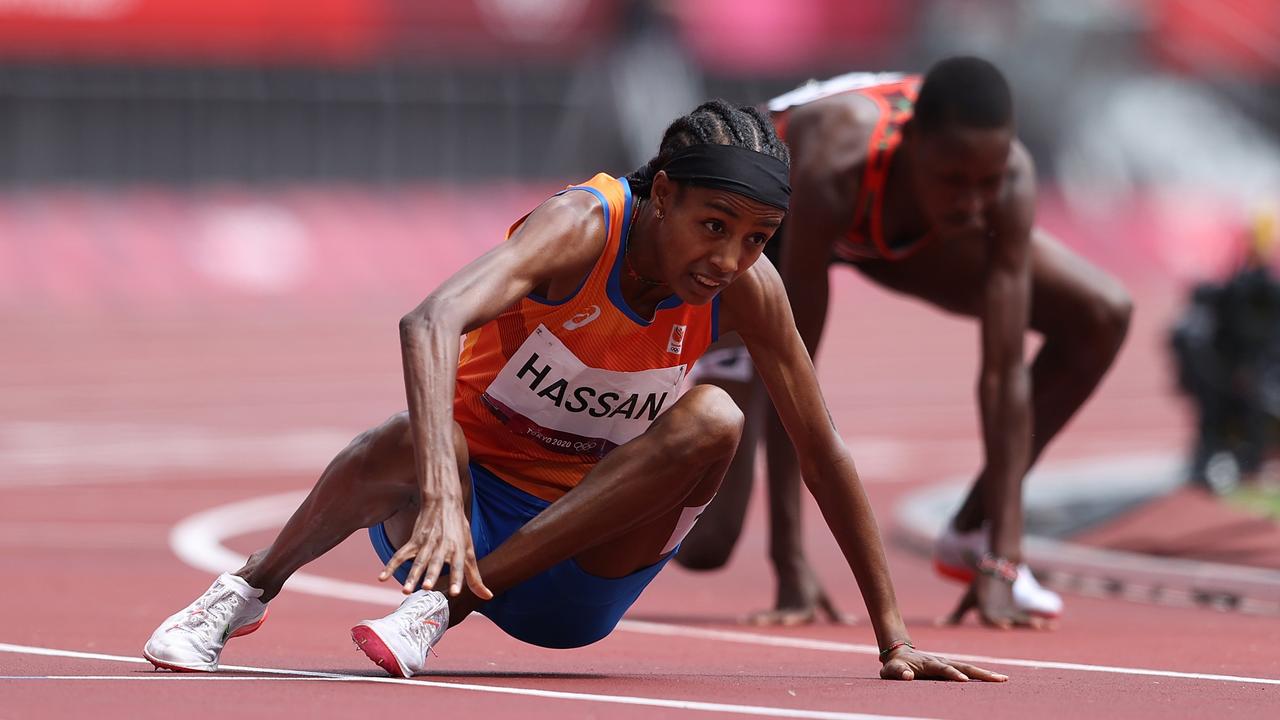 Dutch runner Sifan Hassan picks herself up after falling over Kenyan Edinah Jebitok in a heat of the women’s 1500m at the Tokyo Olympic Stadium. Picture: Getty Images

Dutch runner Sifan Hassan showed what the Olympics are all about when she picked herself up from a fall and fought her way back to victory in a heat of the 1500m.

Hassan hit the deck on the last lap of her race after tripping over an athlete who’d fallen in front of her.

The tumble left her 30m behind the leaders with less than 300m to run, but she got back on her feet and started to run down her competitors, crossing the line in first place.

Her determination won applause from other athletes who were watching day 10 of competition and has been celebrated as one of the great moments of the Tokyo Games. Sifan Hassan hits the deck on the final lap of her 1500m heat in Tokyo. Picture: Channel 7 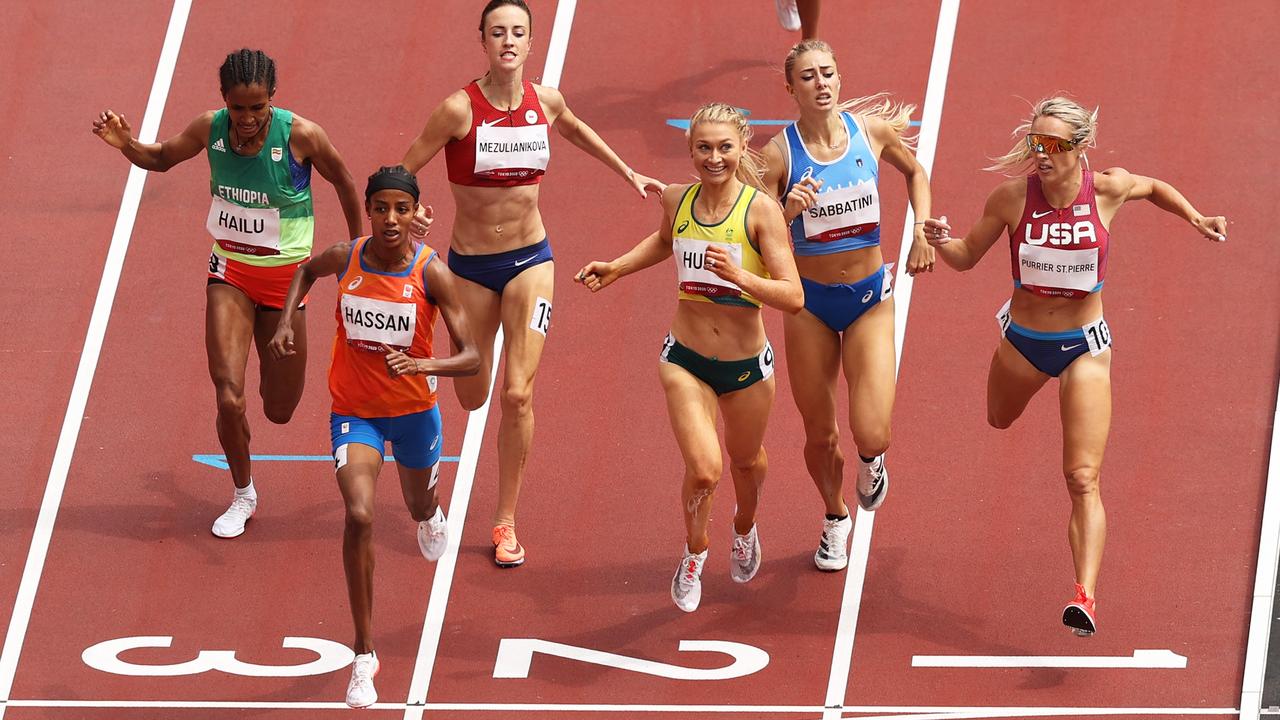 Sifan Hassan crossing the finish line in first place after a stunning comeback after her fall in her 1500m heat. Picture: Getty Images

But the 28-year-old Dutch superwoman was not done with impressing Games watchers yet. She went on from her 1500m heat fall in the morning to win gold in the 5000m final that night. 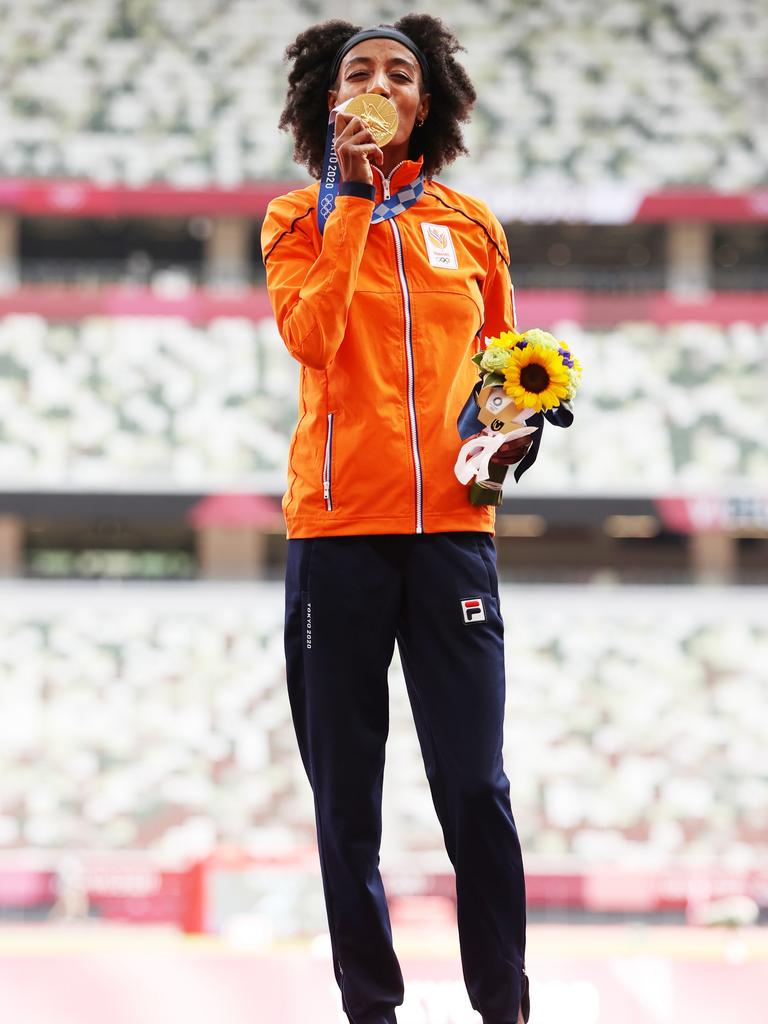 Sifan Hassan kisses the gold medal she won in the women’s 5000m final at the Tokyo Olympics. Picture: Getty Images

Her never-give-up attitude was a contrast to another big story from the Tokyo Olympic Stadium, where Jamaican star Shericka Jackson appeared to take her 200m heat much too casually.

Jackson won bronze in the women’s 100m final on Saturday night and was also a favourite to get a medal in the 200m.

But she failed to progress to the 200m semi-finals when her half-hearted* effort put her in fourth place in the heat. Only the first three placegetters went through to the semi-final.

She was in third as she approached the finish line but Italian Daila Kaddari pipped her on the line by microseconds. 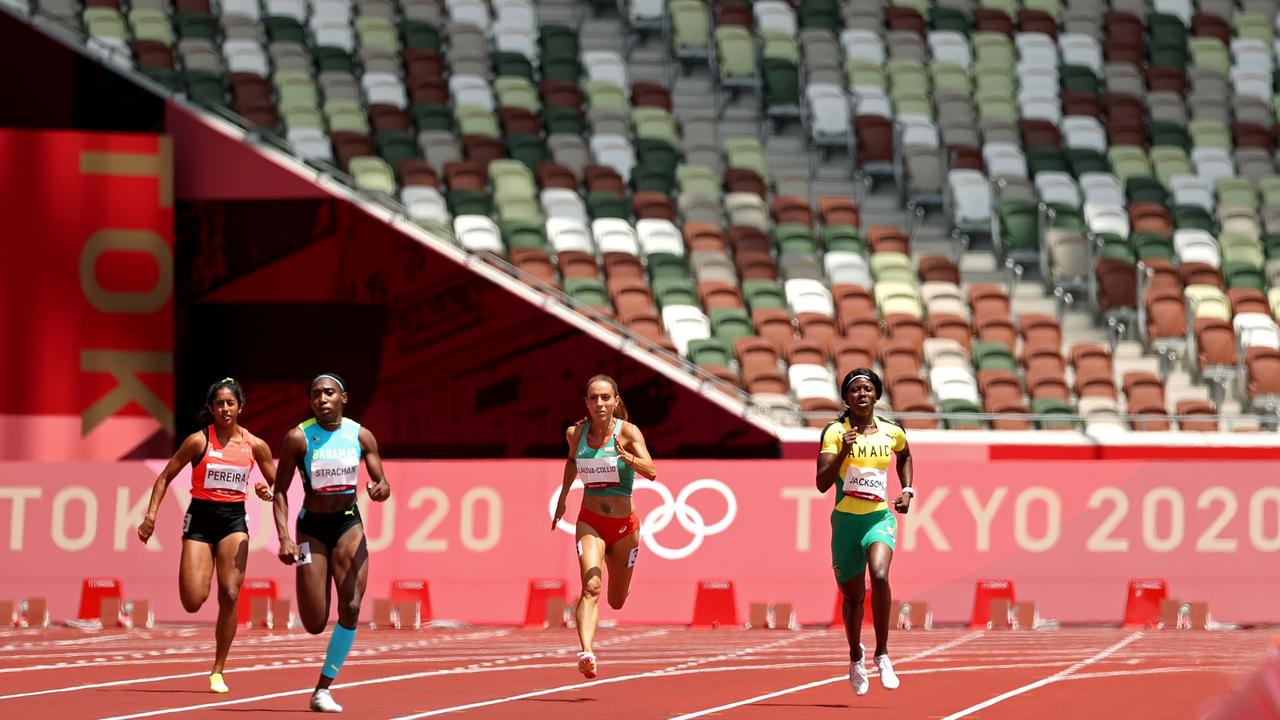 Shericka Jackson of Jamaica (right) takes it easy as she approaches the finish line in the 200m heat against (from left to right) Veronica Shanti Pereira from Singapore, Anthonique Strachan from the Bahamas and Ivet Lalova-Collio from Bulgaria. Picture: Getty Images

It was all too much for Channel 7 commentator Bruce McAvaney and former Aussie runner Tamsyn Manou.

“She’s not even trying,” Manou said.

“Look at her at the back of the field. It’s good to have confidence in sport but that’s just being a little bit too cocky*, you can’t run like that.”

McAvaney added: “Four one thousandths of a second would have got her through. I can’t believe the unprofessional way she went about that race.” Australia’s Riley Day posted a personal best time in the women’s 200m semi-finals but narrowly missed a place in the final. Picture: AFP

Young Australian runner Riley Day did make the 200m semi-finals, giving her all to just miss out on a place in the final.

The 21-year-old finished fourth in her semi, registering a personal best time of 22.56sec.

“That is an outstanding performance,” McAvaney said after calling the race.

“It is hard to overstate* how good that was.”

Fellow Australian and equestrian legend Andrew Hoy was another whose commitment to the Olympic ideal of giving your best could not be questioned on day 10 of competition. Andrew Hoy and his horse, Vassily De Lassos, after collecting bronze in the showjumping individual final at the Tokyo Olympics. Picture: Getty Images

Hoy, who has competed at eight Olympics, scored a silver medal as part of the Australian team and an individual bronze in showjumping on his horse Vassily De Lassos.

The medals made 62-year-old Hoy Australia’s oldest Olympic medallist and took his Olympic medal tally to three gold, three silvers and a bronze from his eight Games appearances. CLASSROOM ACTIVITIES
1. Commentary Box
Find some video footage of Sifan Hassan’s 1500m heat. Play the video with the sound on mute. Give your own commentary for this event, creating excitement and describing how the event is playing out.

2. Extension
Set a timer for 5 minutes. In that time, brainstorm as many adjectives and adverbs (describing words) as you can that apply to this event. See how many amazing vocabulary choices you can come up with. When you are done, repeat the above commentary exercise. Can you make your commentary more interesting by using some of the adjectives and adverbs that you brainstormed?

VCOP ACTIVITY
A New Olympic Category
The Olympic committee has decided it should revise the Olympic sports and make sure it hasn’t left any competition out. Write a letter to the Olympic Committee trying to convince them that your talent should actually be classed as a sport and be included in the next Olympics. Remember to include clear reasons why your talent should be included, use persuasive and emotive language, and back up your reasons with detailed explanations.