Four decades on, Olympic justice may be on its way for Aussies Australia’s golden girls and other Olympic athletes from the 1970s and ‘80s may at last receive medals improperly awarded to swimmers from what was then East Germany.

Australian female swimmers cheated out of Olympic glory by East Germany’s ­infamous* anabolic steroid* use in the 1970s and ‘80s may finally get the ­medals they deserved.

The new boss of world swimming’s governing body FINA said it’s time to right the wrongs of the past.

Ford would add two more gold medals, in the 400m freestyle and 200m butterfly, to the gold she won in the 800m freestyle.

FINA boss Husain Al-Musallam announced last week the organisation would be rebuilt and restructured after a reform committee found widespread problems with the sport’s leadership and governance. 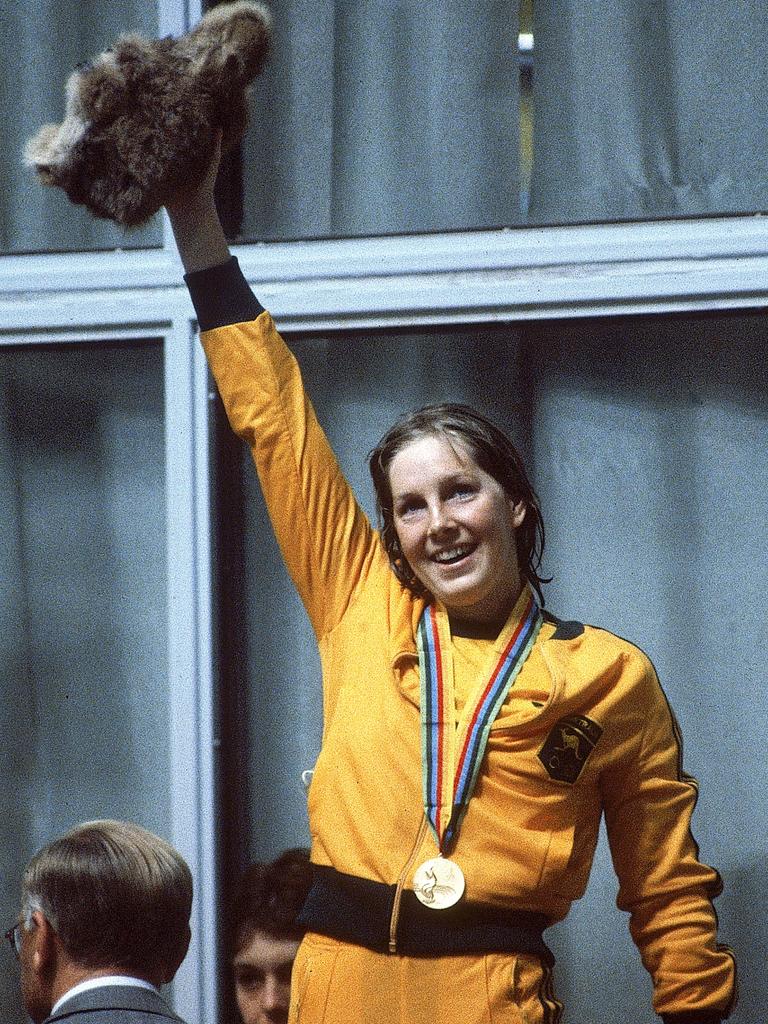 Australia’s only individual gold medallist of the Moscow Games, Michelle Ford celebrates winning the women’s 800m freestyle during the 1980 Olympic Games. She was beaten in two other finals by East Germans who have since been found to have been using banned substances. Picture: Getty Images

At the top of Mr Al-Musallam’s list was to retrospectively award Olympic medals to swimmers who were robbed because of East Germany’s doping program, cultivated* by the country’s political ideology* during the Cold War.

Swimmers have been campaigning for recognition for decades but until now their pleas have gone unanswered.

Only the International Olympic Committee can ­redistribute medals, but well-placed insiders say the IOC is more open than ever to the possibility.

If FINA succeeds, other sports – especially athletics – will be under pressure to follow. That could see sprint queen Raelene Boyle finally get her rewards – she was ­notoriously* robbed of gold medals in the 100m and 200m finals in Munich in 1972. The headquarters of the International Swimming Federation (FINA) in Lausanne, Switzerland. Picture: TASS via Getty Images

“FINA understands the concerns of athletes who have competed against others subsequently proved to have cheated,” Mr Al-Musallam said, the first time a FINA boss has acknowledged the problem.

“Athletes work their entire lives for a mere chance to compete for a medal, (let) alone win one. So when they are denied the reward they worked so hard to achieve, FINA must do everything it can to right this wrong.”

Ford would have joined swimming’s hall of fame if not for the East German cheats in Moscow who improperly won gold.

Curry finished fifth in the 100m butterfly behind three East Germans in Moscow, so now could be promoted to silver. McDonald should also be awarded silver, while Livingstone, Milgate, Hooiveld, Allesandri and Wirdum deserve bronze medals.

In a weekend opinion piece for News Corp, Ford – now Michelle Ford-Eriksson – said she was among athletes who addressed International Olympic Committee members at the 1981 Olympic Congress in Germany to jointly state that they considered doping “the most shameful abuse of the Olympic ideal”. “It is time to right the wrongs and give those who have been denied their rightful place the recognition they deserve and their place in history,” Ford-Eriksson wrote in the column.

“I was Australia’s only individual gold medallist at the 1980 Moscow Games, and placed third and fourth in my other events behind the East German (GDR) swimmers.

“I was also the only female swimmer from a Western country to claim gold ahead of the German Democratic Republic’s medal machine. I beat a system that had their athletes doped to deliver sure-fire victories and podium sweeps as poster girls for a political ideology.” The front and back of the Moscow 1980 Summer Olympic Games gold medal. Picture: TASS via Getty Images

Ford-Eriksson said it was a dream come true to receive her gold medal, tears running down her face, as Advance Australia Fair played and she watched the national flag being raised, conscious that the moment was being shared by family, friends and all those watching back home. But many others were denied that chance.

“At the 1972 Munich Olympics, the East German female swimmers claimed no gold and held no world records, yet they emerged from Montreal in 1976 with 11 golds and a tally of 79 world records set since 1973,” Ford-Eriksson wrote.

“In Moscow, muscular girls with deep voices dominated again – 11 of 13 golds, six podium sweeps, 15 other medals and 10 world records. They never tested positive, so our questions were never answered until the Berlin Wall fell in 1989.” Former East German swimming coach Volker Frischke was one of four coaches charged with supplying performance enhancing drugs to swimmers. He is pictured in March 1998 arriving at Berlin District Court.

The East German team’s chief doctor Dr Lothar Kipke was eventually convicted by a Berlin court in January 2000 of administering steroids to underage girls who had no medical need for substances banned in sport.

Ford-Eriksson said that women swimmers during the 1970s and ‘80s were denied rightful rewards, not by better athletes but by doping and a broken system. While she personally might have won three golds in 1980 instead of one, Ford-Eriksson said she recognised that she still got to experience the glory of winning – unlike others who were denied.

“It saddens me that many are still left feeling robbed after decades,” she wrote. “I also feel for those who won medals but who have paid a price with serious health problems. We all carry the scars.”

Under a reform at FINA, it was hoped that Kipke would also be stripped of his honour for “services to swimming”.

“Reconciliation* and healing might then begin,” Ford-Eriksson wrote. “The FINA reforms are timely and exciting. I hope the IOC will also seize the day to help heal the damage caused by the biggest theft of Olympic prizes in history.” Former Olympic swimmer Lisa Curry may be promoted to a silver medal for her performance at the 1980 Moscow Olympics. Picture: Sam Ruttyn

Australian swimmers who were beaten by East Germans who could be upgraded:

1976
Rosemary Milgate – Finished fourth in 800m freestyle behind one East German. Could be promoted to bronze.

Kindness shone through competition in Tokyo

CLASSROOM ACTIVITIES
1. The price of cheating
Whether these East German swimmers knew they were cheating or were just slaves to the coaches and bosses of the East German swimming team back in the 1970s and ‘80s remains to be seen. But they have been proven to have cheated at more than one Olympic Games and their medals may be stripped. So what is the real price of cheating?

Divide a page into four sections and try to put yourself in the shoes of the different stakeholders to this story.

Head each box with one of the following four groups and suggest ways that the cheating scandal may have affected them:

2. Extension
What sort of ceremony should be planned by FINA to award these athletes the Olympic medals they rightfully deserve? Write down your ideas below of how it could be made somewhat special to help right the wrongs of the past.