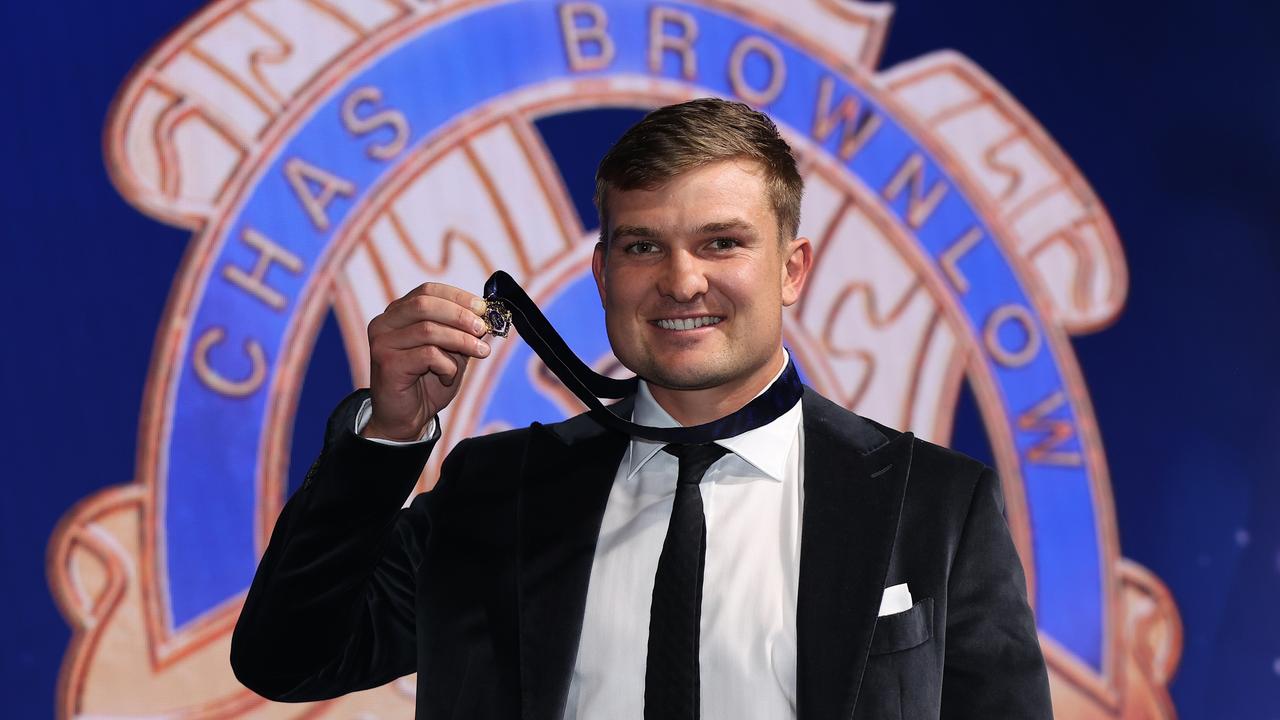 Wines’ 36 votes equalled Richmond star Dustin Martin’s 2017 record for the most votes in a year.

But it came down to the last game of the season for Wines to be declared the 2021 winner. He starred in that match between Port Adelaide and the Western Bulldogs, with 34 possessions earning him two more votes and sealing the Brownlow.

It was a remarkable night as the main Brownlow fancies* dominated the count, with the first three placegetters racking up more than 30 votes for the first time under the current 3-2-1 voting system. 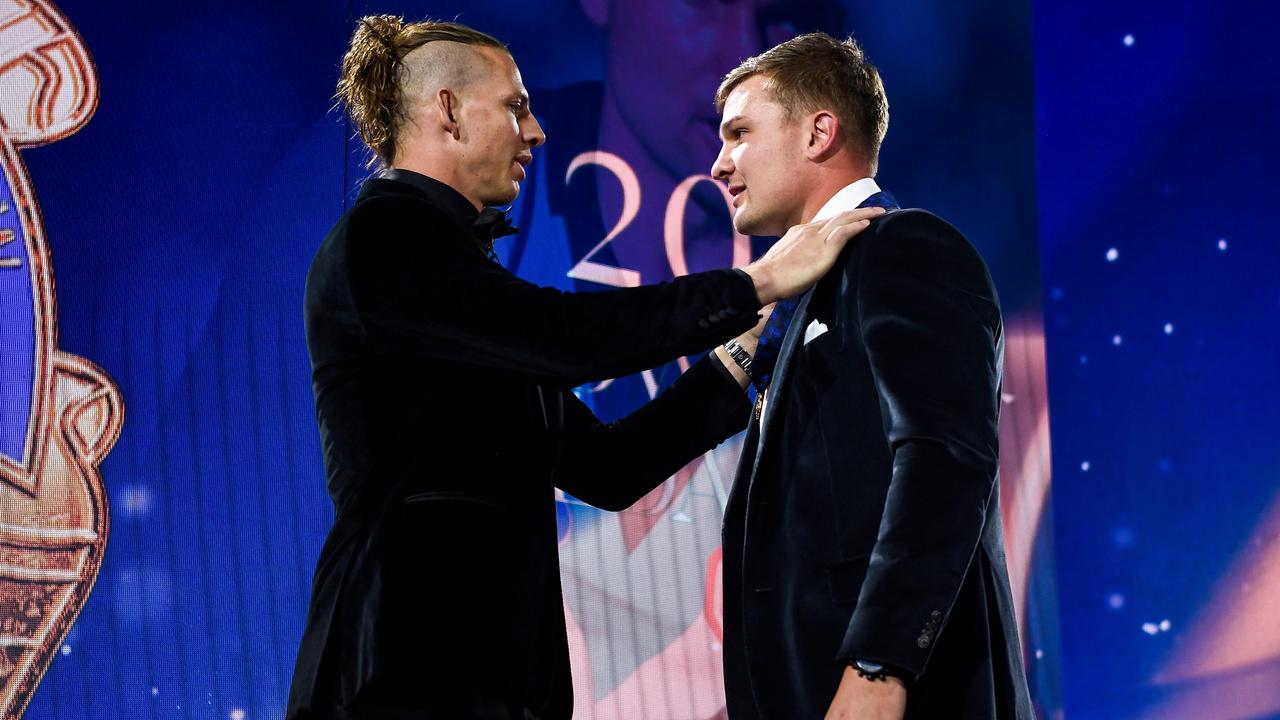 Past winner Nat Fyfe, of the Freemantle Dockers, presents the Brownlow Medal to Ollie Wines after the 2021 Brownlow Medal count in Perth. Picture: AFL Photos via Getty Images

Wines, who is aged 26, made his move in the back end of the season, catching Bontempelli who led by four votes at Round 15 and three votes after Round 19.

But as Bontempelli cooled in the final month of the season, Wines, who grew up in Echuca in Victoria, continued his midfield demolition job in 2021. 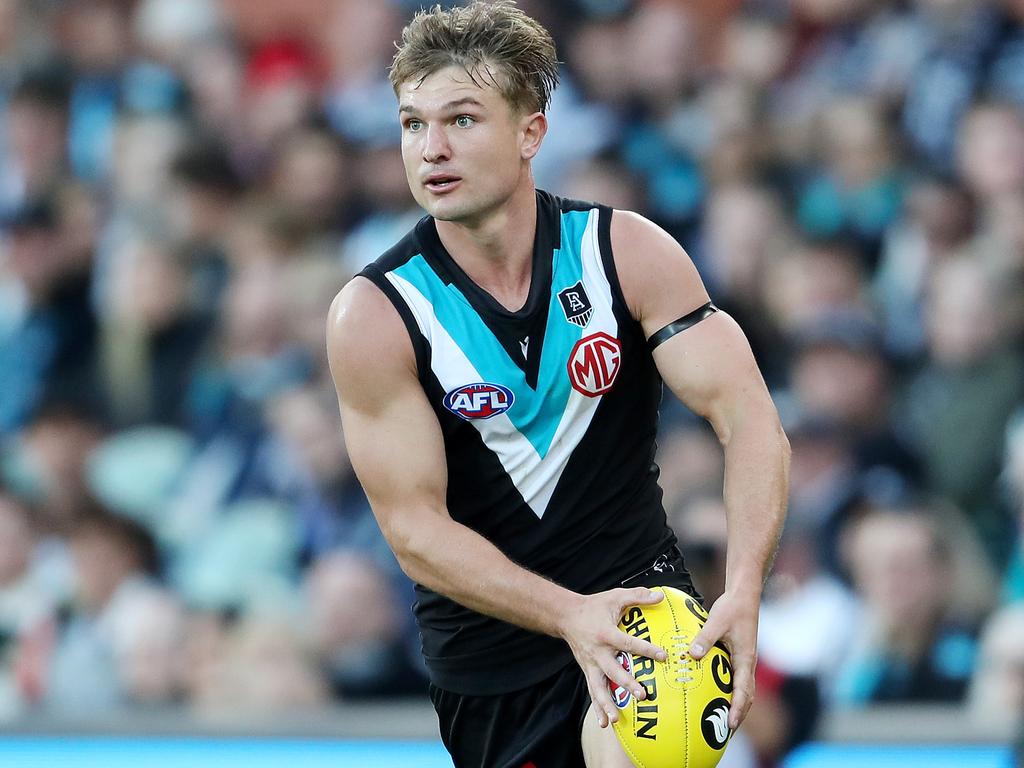 In all, Port’s clearance king polled in 16 games and 11 of the last 12 games of the season.

Wines averaged 32 possessions a game this year to re-establish himself as one of the game’s premier* ballwinners.

Oliver, who will spearhead* the Demons’ premiership bid against the Bulldogs in the Grand Final on Saturday, threatened throughout the count, but got votes in only one of the last three games of the season.

Wines endured* a tough year in 2019 when there was speculation* about his position in the team and whether he would head home to Victoria after playing 12 games for six Brownlow votes that year.

He was also sounded out by Carlton in the trade period that year but made the call to stay with Port Adelaide. 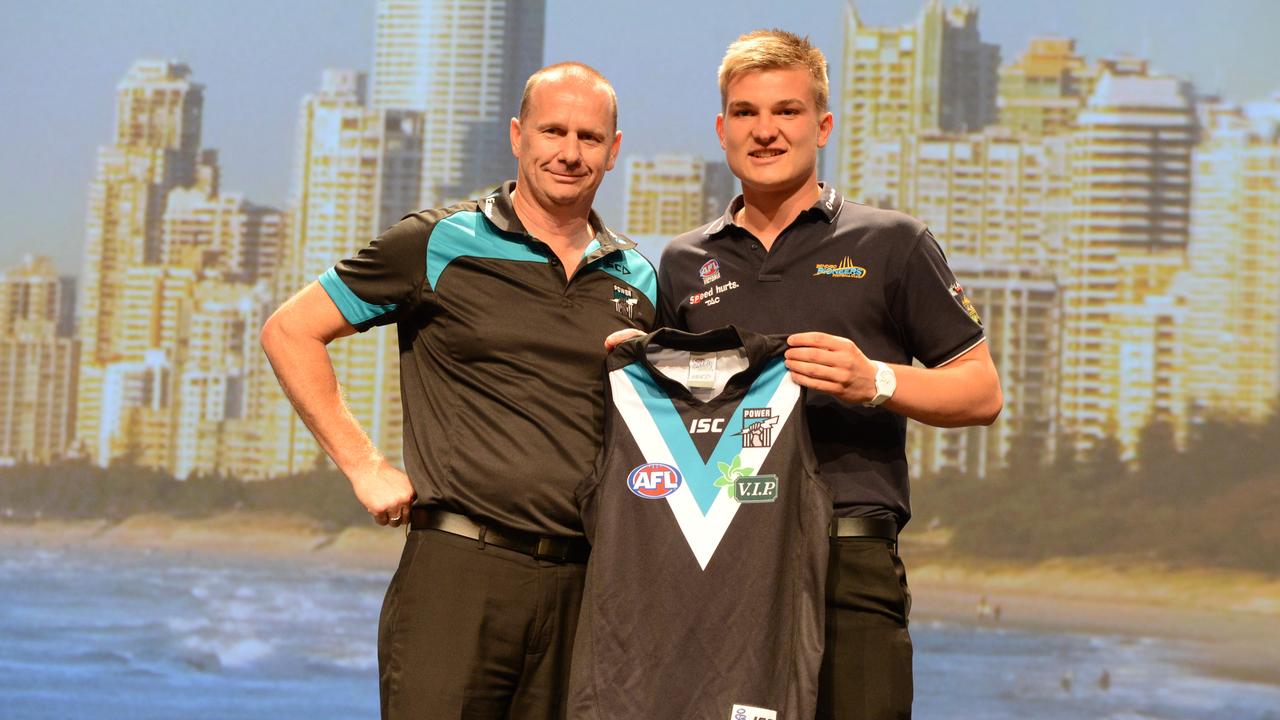 Port Adelaide coach Ken Hinkley with a young Ollie Wines on the night he was drafted to the club in 2012. Picture: Wayne Ludbey

Wines was taken by Port Adelaide with pick No. 7 in the 2012 draft and on Sunday night became the Power’s first Brownlow Medallist.

Wines said he was honoured to win the prestigious award as part of a career-best year after battling some homesickness early in his AFL journey.

“There was a few tears from mum and dad and myself on the (draft) night but it has only strengthened me to become the person I am today and to be honest it is the best decision the club could have made for me.

“Us as a human rather than a footballer is what is most important and I think that (move) helped develop me into the man I am today and I am very proud of that.”

2. Extension
Create an award for the best sportsperson or student at your school. Think of three characteristics you want the winner to show (such as sportsmanship, top sporting ability, being a good role model or being fair to others).

Now design a medal to be presented each year. Think about how you can add some of the characteristics the medal represents into its design.

VCOP ACTIVITY
Interview the winner
Imagine you were there during the Brownlow Medal count and you had to do the interview with Ollie Wines after his win.

Think of 10 questions you could ask the 2021 Brownlow Medallist that would give the audience in the room and watching on television some insight into Ollie’s background and his football career. Don’t forget to try to use facts and details from the article to help make your interview as realistic as possible.

Challenge yourself to use different question stems (question opener words) to write your questions, and don’t forget to end with a question mark.