Ashleigh Barty speaks after being awarded with the Newcombe Medal on December 3 in Melbourne, Victoria. Champion John Newcombe, for whom the award is named, is in the background. Picture: Daniel Pockett/Getty Images

Ashleigh Barty couldn’t have ended her world-beating year with a hit of tennis – even if she’d wanted to.

The world No. 1 had given away all her racquets.

Barty, 23, won the Newcombe Medal for the third year in a row on Monday night after a year that included the French Open title, tennis’ biggest cash prize at the WTA Finals and the year-end top ranking.

By giving away her racquets she forced herself to take a complete break, which she said had provided the perfect foundation to launch into 2020.

“I love playing in Australia, I love the Australian summer and I’m really looking forward to trying to do well there and to try and give myself the best chance … have a really good preparation over the next four or five weeks and then come into the summer and give it a red hot crack*.”

Barty said she had given the racquets to members of the Fed Cup team staff, including team captain Alicia Molik.

“I know that they still hit balls and it’s nice to see a few of my frames floating around,” she said. Australian tennis legend John Newcombe – for whom the award is named – presented Barty with the medal, which comes just weeks after she was announced the 2019 winner of The Don Award as the athlete who most inspired the nation.

Newcombe said the entire country should be proud of the young superstar.

“She represents what Australia loves in a sportsperson. Great fighting qualities, she’s a good sport on the court and she’s humble* about the whole thing,” he said. John Newcombe poses with Ashleigh Barty after she won the Newcombe Medal at the Australian Tennis Awards in Melbourne, Monday, December 2, 2019. Picture: AAP

An emotional Barty said “her heart race(d)” when she thought about her parents Robert and Josie telling her that they “love to watch you play”.

“It kind of gives me the jitters a little bit,” she beamed. 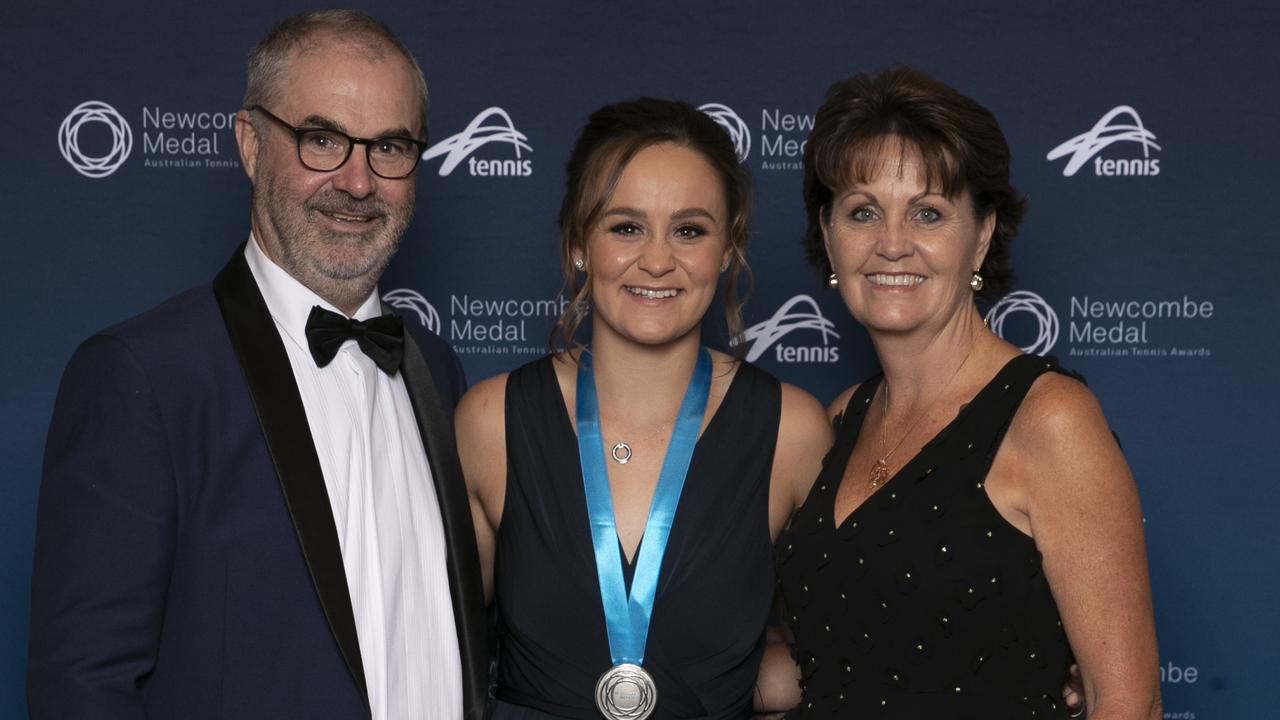 Ashleigh Barty with her mum and dad. Picture: AAP/Tennis Australia

Barty is just the second Australian tennis player to win the Newcombe Medal three times, with Fed Cup teammate Samantha Stosur the only other.

“I cannot recall a single training session in the almost eight years we spent together where she did not give 100 per cent,” Taylor said. Australian cricketer David Warner shows off the pink ball on day 2 of the second Test against Pakistan at the Adelaide Oval, SA. Picture: Sarah Reed

Aussie spin star Nathan Lyon’s five-wicket haul – the 16th in his career – carried Australia to the finish line before the fast bowlers took the wickets of the tail enders* when the new ball* was taken under lights.

Australia didn’t even need to bat a second time with opening batsman David Warner’s first innings helping Australia to a victory by an innings and 48 runs.

Warner was named man of the match and man of the series after his historic first innings score of 335 not out.

It followed Australia’s victory in the First Test – which was also by an innings.

The use of a pink ball for the day-night second Test sparked much debate, with some suggesting it went soft, so it only swung* when it was new.

Aussie captain Tim Paine said critics of the pink ball need to accept it will have its own characteristics and get on with embracing* it.

“What we want is people watching Test match cricket and I think the pink ball day-night Test certainly makes that happen,” Paine said.

A pink ball is used to help cricketers better see it under lights.

Australia takes on New Zealand – the No. 2 Test team in the world – at Perth’s Optus Stadium, beginning December 12. This is also a day-night Test and pink balls will be used.

CLASSROOM ACTIVITIES
1. Barty caricature
Draw a caricature of Ash Barty surrounded by all her qualities and achievements. A caricature is a picture, description or imitation of a person in which certain characteristics are exaggerated to make it a cartoon or comic effect. For example, you could draw Ash with an extra-large tennis racquet showing she is a champion tennis player. Around the outside of the caricature or somewhere else within your picture, write her main achievements and the qualities that won her the Newcombe medal for the 3rd time and the Don award as the athlete who most inspired the nation.

2. Extension
Why is it so important for athletes like Ash and people in general who live a stressful life to take a break to unwind and refresh?

Work with a partner and discuss what you and your family do to unwind and refresh yourself for the new school year.

HAVE YOUR SAY: Have you ever watched Ash Barty play tennis? Will you watch her this summer during the Australian Open?
No one-word answers. Use full sentences to explain your thinking. No comments will be published until approved by editors.