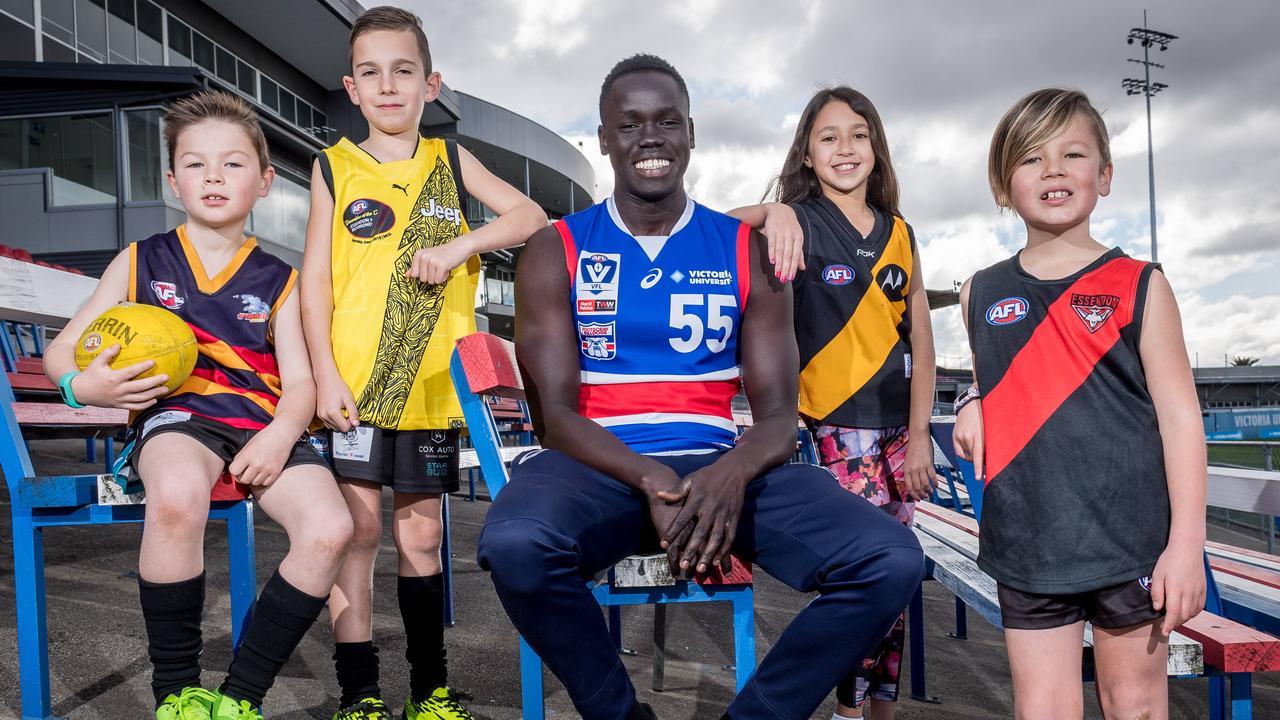 It has been two years since research revealed rampant racism at elite and junior sporting events and Western Bulldogs VFL footballer Reuben William led a push against racism in sport. Now major Australian codes including the AFL signed their commitment on Wednesday to enforcing new regulations against racist behaviour. Reuben was joined in 2019 by Jay Knol, Jackson Ramantanis, Hugo Wallert and Imani. Picture: Jake Nowakowski

The “zero-tolerance” protocols* cover some of the nation’s largest sporting bodies, including the AFL, Tennis Australia and Cricket Australia.

National Rugby League, the Australian Institute of Sport and Sports Australia have also endorsed* the guidelines. 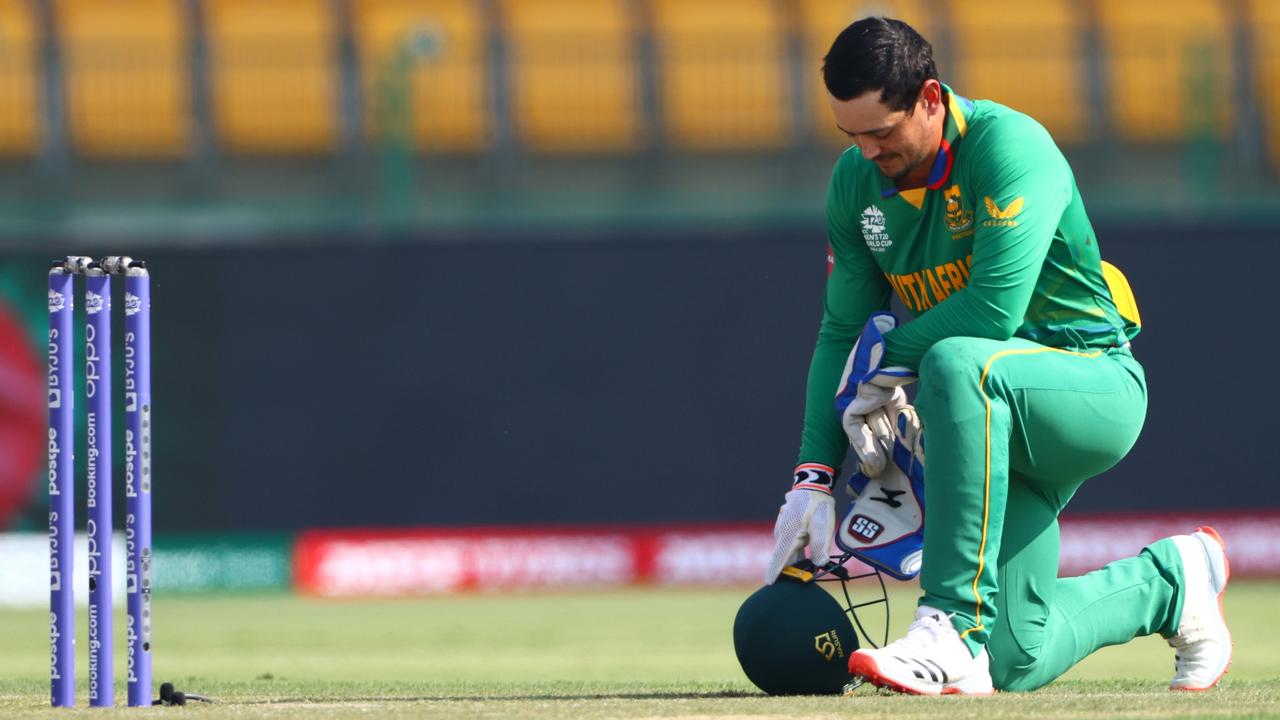 South African cricketer Quinton de Kock made global headlines when he backflipped and decided to take a knee to help educate others about racism. He is pictured prior to the T20 World Cup match between South Africa and Bangladesh on November 2 in Abu Dhabi, United Arab Emirates. Picture: Getty Images

Formulated by the Australian Human Rights Commission, the guidelines are expected to set a standard for community sport as well.

They state clubs should “be prepared for the reality of racism and the possibility of racist incidents”.

They require clubs and venue officials to take decisive action to immediately respond to racist incidents, which might include removing spectators from grounds, banning or pausing memberships and “making re-entry contingent* on participation in anti-racism training”.

There is a significant role for bystanders to report racist incidents via SMS hotlines “as long as it is safe and practical to do so”.

Clubs and venues are encouraged to “address racism in a holistic* manner by ensuring inclusive* practices that positively reflect on the value of diversity to the club and that promote social cohesion* events”. Adam Goodes, former Australian of the Year and Sydney Swans icon, has detailed the racism levelled against him throughout his incredible career. This deeply evocative mural was painted in his honour in inner city Sydney last year. Picture: AAP Image

Race Discrimination Commissioner Chin Tan said there was “no place for racism anywhere, and that includes sport”.

“We need consistent and strong responses to spectator racism across the sporting codes to send a united message that racism will not be tolerated, and that there will be serious consequences when it occurs,” he said.

Measures include having clear definitions of racism, taking concrete steps when it does occur and having avenues for incidents to be reported such as SMS hotlines. It notes that “responses to racism should be appropriate to the age and understanding of (the) perpetrator*”. 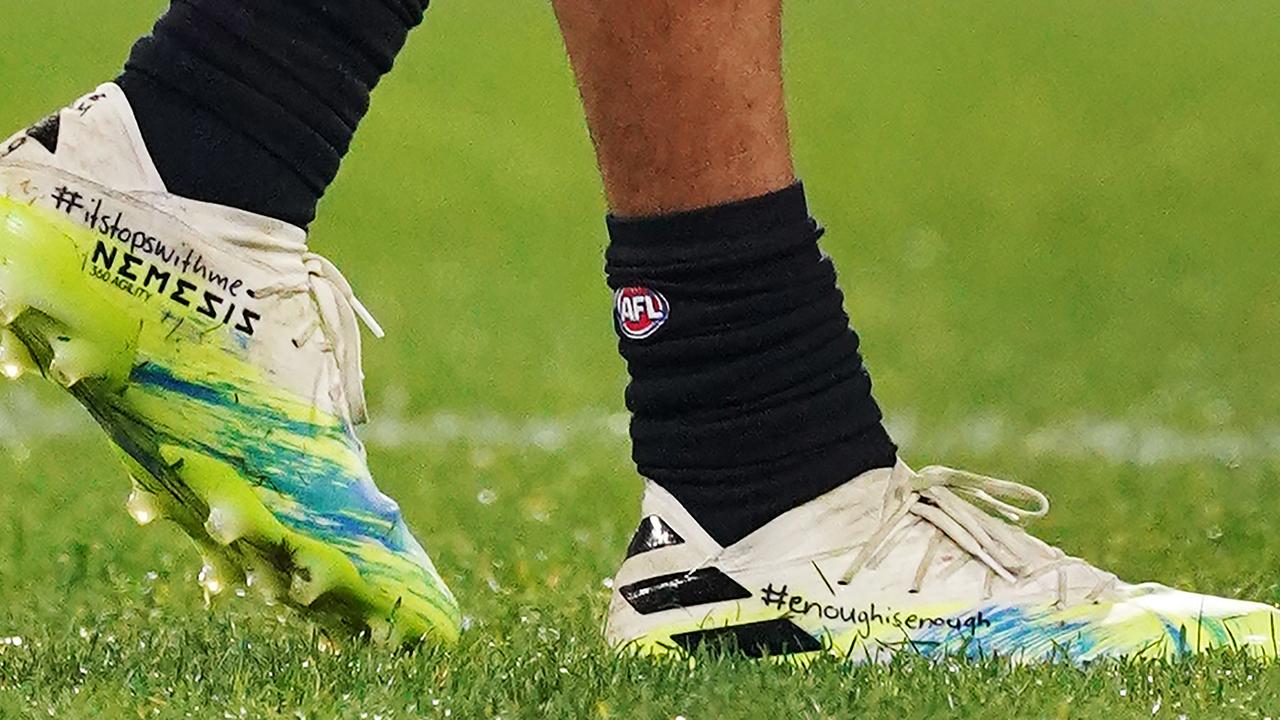 Indigenous AFL legend Eddie Betts let his boots express his position on racism during the Round 4 AFL match between the Essendon Bombers and the Carlton Blues at the MCG in June last year. Picture: AAP Image

The guidelines state that there have been recent occurrences of racism in the professional arena as well as community events.

Collingwood Football Club’s Do Better report found that racism was experienced by both players and fans. Indigenous AFL players such as Eddie Betts and Adam Goodes have also detailed the racism they have been subjected to over many years. Other codes such as cricket and soccer have taken steps to address racism issued towards black, Indian and Pakistani players. AFL spokesperson Tanya Hosch said the league was proud to be a signatory to the new racism regulations. Picture: AFL Photos via Getty Images

Tanya Hosch from the AFL said the league endorsed the guidelines and was proud to be a signatory.

“The AFL’s work continues with our clubs, our venues and our fans on providing an inclusive, welcoming and safe environment for everyone at our games – there is no place for racism in sport, or anywhere,” she said.

Hard work ahead to clean up at Collingwood

CLASSROOM ACTIVITIES
1. Spread the message
Think of a slogan and design a billboard to display your slogan, that could be displayed along the sidelines at sporting events to communicate the zero-tolerance stance against racism.

2. Extension
Have you been a victim of or witnessed racism? Write about your experience.

Given your experience, how do you feel about the release of these zero-tolerance guidelines?

VCOP ACTIVITY
Wow word recycle
There are plenty of wow words (ambitious pieces of vocabulary) being used in the article. Some are in the glossary, but there might be extra ones from the article that you think are exceptional as well.

Extension
Find a bland sentence from the article to up-level. Can you add more detail and description? Can you replace any base words with more specific synonyms?