Google CEO Sundar Pichai with one of Google's quantum computers in its Santa Barbara lab in the US. Picture: AFP/Google

Google has announced it has achieved a breakthrough in quantum* computing.

The tech company claims it has developed an experimental computer processor that took just minutes to complete a calculation that would take the world’s best supercomputer thousands of years.

The achievement could open the door someday to machines so blazingly fast that they could revolutionise tasks such as finding new medicines, developing vastly smarter artificial intelligence systems and cracking the encryption* that protects some of the world’s most closely guarded secrets.

Such practical uses are still probably decades away, scientists said.

But the latest findings, published in the scientific journal Nature, show that “quantum speedup is achievable in a real-world system and is not precluded* by any hidden physical laws,” the researchers wrote.

While regular computing relies on bits, or pieces of data that bear either a one or zero, quantum computing employs quantum bits, or qubits, that contain values of one and zero simultaneously. Regular computing relies on bits making up binary code, in which pieces of data have either a one or zero value. Quantum bits contain values of one and zero at the same time.

But quantum computing requires placing the fragile and volatile* qubits in colder-than-outer-space-refrigerators to control them.

Google’s quantum processor looks like an upside-down rubbish bin, out of which comes a series of tubes used to conduct signals to a chip that is only 1cm across. The chip is cooled by a liquid helium fridge that brings the qubits down to -273C (which scientists call absolute zero). Making the qubits so cold limits how much they vibrate, which causes errors in calculations. 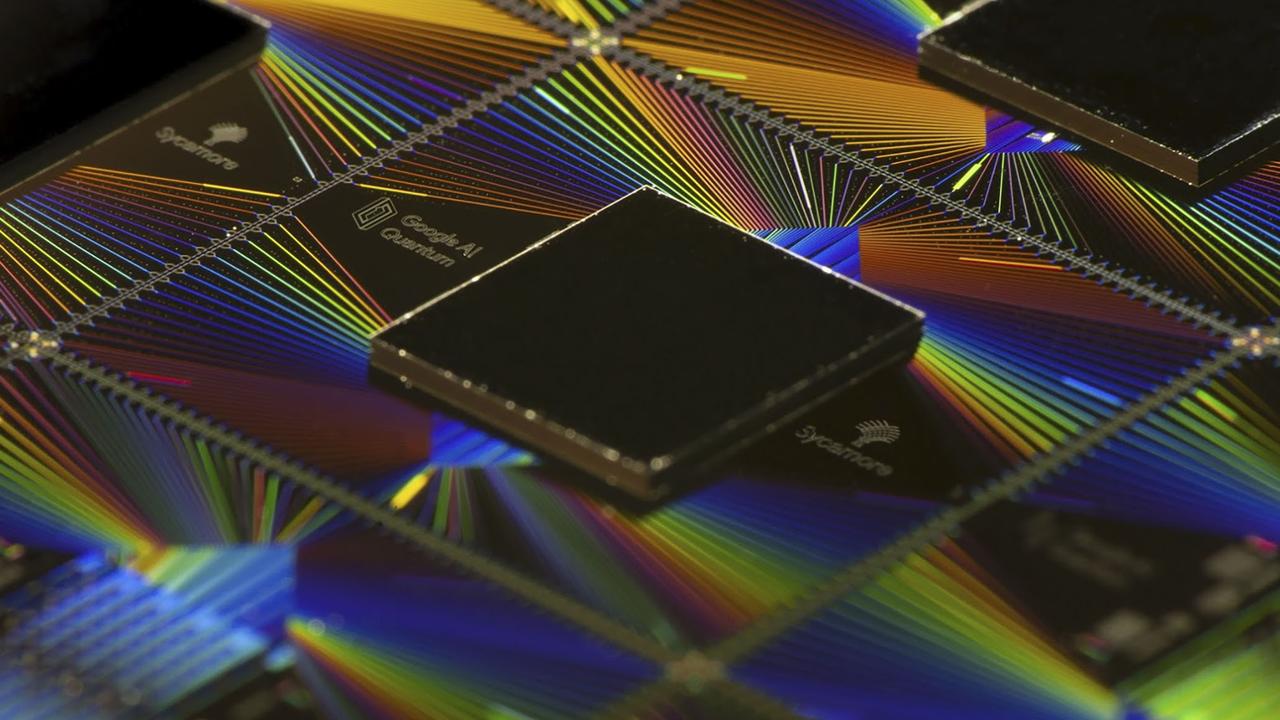 An illustration of the Sycamore processor, which is only 1cm across, made up of 54 qubits interconnected in a lattice pattern. Picture: AFP/Google

Google said that its quantum processor, called Sycamore, finished a calculation in 3 minutes, 20 seconds — and that it would take the world’s fastest supercomputer 10,000 years to do the same thing.

The calculation was a random sampling problem, similar to looking at the various combinations that could come from dice or a gambling machine. It has little practical value, other than to test how well the processor works.

Google is racing rivals including IBM and Microsoft to be the first to make money from the technology and sell it through its cloud computing business.

When news of Google’s achievement was leaked last month, IBM made a counterclaim that its supercomputer, called Summit, could actually do the calculation in 2.5 days.

Google defended its position, but did not dispute its rivals’ claims. It has manufactured a handful of chips with 54 qubits, much more powerful than the standard 64-bit chip in many consumer devices. However, for the technology to be useful to customers it would need to make chips with thousands of qubits.

Whether or not Google achieved “quantum supremacy”, as it stated, the research suggests Google and others are making progress.

“The quantum supremacy milestone allegedly achieved by Google is a pivotal step in the quest for practical quantum computers,” John Preskill, the Caltech professor who coined the term “quantum supremacy,” wrote in a column after the paper was leaked.

Google CEO Sundar Pichai compared the achievement to building the first rocket to leave Earth’s atmosphere and touch the edge of space, an advance that brought interplanetary travel into the realm* of the possible.

“For those of us working in science and technology, it’s the ‘hello world’ moment we’ve been waiting for — the most meaningful milestone to date in the quest to make quantum computing a reality,” Pichai wrote in a blog.

Australia under attack from cyber hackers

CLASSROOM ACTIVITIES
1. Draw a diagram
It is hard to imagine how a quantum computer might work and how it is different to other computers.

After reading the description of what the quantum processor looks like in the article above, draw a labelled diagram of Google’s new computer. Where possible, include information about the significance of each part. (Why it is needed?)

2. Extension
Google has announced that they have achieved ‘quantum supremacy’. Quantum supremacy is defined as ‘the ability for quantum computers to solve problems that classical computers practically cannot’. Other people do not agree with Google on this statement.

Do you think Google have reached ‘quantum supremacy’? Why/Why not?

Read the article carefully, taking note of different views on their achievement to help you form your answer.

What difficulties do you think could be preventing scientists from developing quantum computers that have practical use?

HAVE YOUR SAY: Are you interested in computers? Do you understand how they work?
No one-word answers. Use full sentences to explain your thinking. No comments will be published until approved by editors.