Kids in schools that have banned devices are seeing the benefits, whether they like it or not Priyash, Stephani Vottari, Principal David Harriss, Ryley and Jemma with their mobiles at Underdale High, SA, which has banned phones from class to help kids to concentrate on their work. Picture: Morgan Sette

Kids are playing and having conversations with their friends at lunchtime and are finding it easier to be organised at school without their mobile phones.

That’s just some of the feedback from students at secondary schools in New South Wales and Victoria that have banned student phones.

While some schools in other states have imposed their own bans, the Queensland and Tasmanian governments both said in June they were not intending to ban phones, despite Federal Education Minister Dan Tehan calling for a national ban and promising to work with the states to achieve this.

The South Australian Government said in June it was considering a ban. 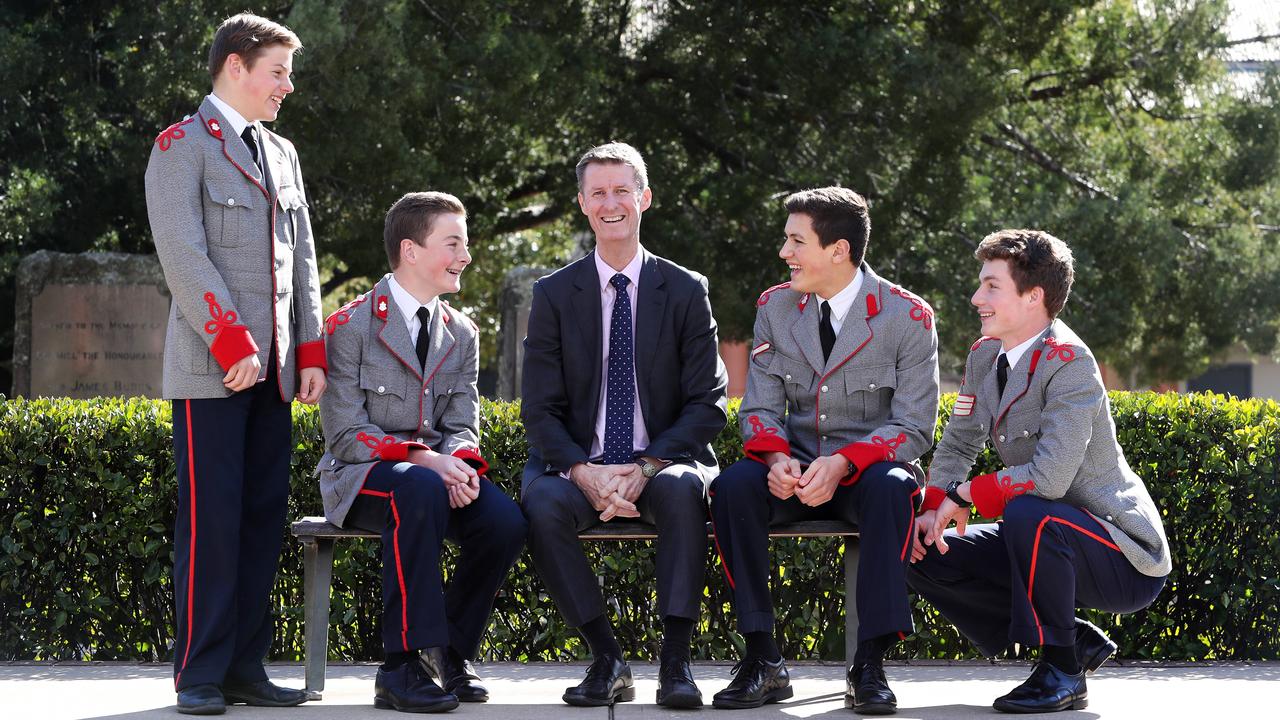 LET’S PLAY CRICKET
The King’s School at North Paramatta, NSW, has voluntarily banned all electronic devices during school hours for students up to year 10.

Deputy Headmaster Stephen Edwards said they trialled the ban with Year 7 students last term then extended it to years 8, 9 and 10.

He said he wanted to change things after noticing students at lunchtime all with bent necks staring into their phones and not interacting with each other.

“One of the housemasters* said it was the first time in years that the cricket bat has come out and all of a sudden the boys were doing things together and they weren’t sitting on their phones.”

The devices aren’t locked away but students must keep them turned off, with those caught using a mobile having it confiscated* for a day.

Those busted a second time have it confiscated for a week and on a third offence parents are called.

For King’s student Robert Napoli, 15, having a phone in the playground was a burden and believes the ban has been widely accepted.

“It takes a load off their shoulders not having a phone in their hand and not having to check their phone every two minutes,” he said.

Angus Williams, also 15, said not being able to check emails and his timetable during lunch was annoying but meant he had to get more organised.

“I like the new phone policy because you can now have a fully immersive* conversation with someone at lunchtime, rather than a person looking at the phone and the conversation getting off track,” he said. Trinity Grammar teachers and parents have backed the mobile phone ban at the Victorian school.

SUCCESS DESPITE PUSHBACK
Victorian non-government school Trinity Grammar is pushing ahead with a permanent mobile phone ban after an initial trial, despite 51 per cent of year 7 to 12 boys being unhappy that they have to put their phones in their lockers.

Headmaster Phil De Young said while the students were “somewhat less affirming*” of the ban, the trial had been a great success.

Teachers and parents overwhelmingly supported the ban and 47 per cent of year 12 boys conceded that the phone ban, being tested over two terms, has improved social interaction among students.

When introducing the trial, he said many boys spent spare moments playing Fortnite instead of speaking with each other.

Of the staff completing the survey, 94 per cent believed the absence of phones had helped students to avoid distractions during the day and 86 per cent of parents thought it was a positive move.

One Trinity Grammar student said he thought the ban had made the students “more focused and more on task”.

“It makes them more sociable too. It has helped a lot of people even though they might not notice it,” the student said.

Another said: “It’s a good idea but having them completely banned prevents things like messages from parents”.

Some were less open to the ban: “Children these days are phone addicts and there’s nothing we can do to stop them”. “Some children would get up to 150 notifications a day — quite often some of which (are) from parents,” he said.

He said schools could successfully ban phones if they wanted to.

“Schools like John Edmondson High School (in Horningsea Park, NSW) who have had the ban in place for five years report that there is increased socialisation and less screen time, more sport and healthy interaction — what the hell is wrong with that? Nothing.”

“If a girl needs a phone to contact her parents, a “dumb” phone is sufficient,” she said. 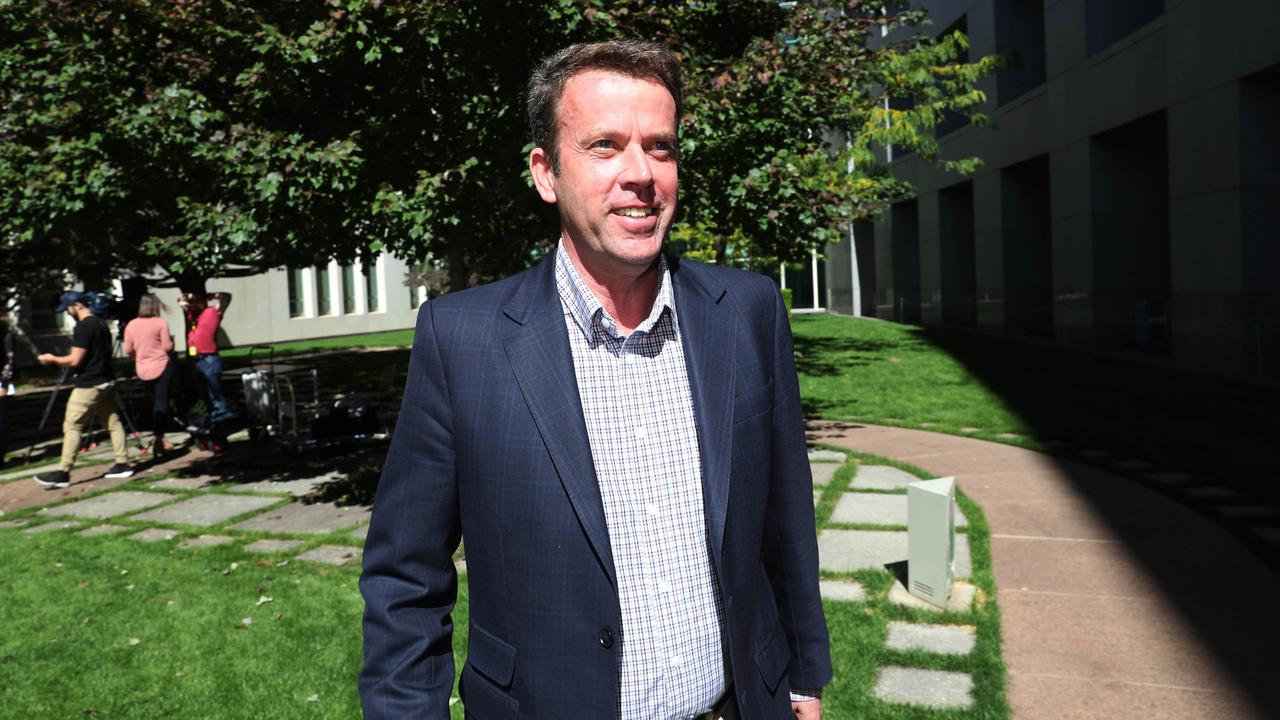 NO BAN FOR QUEENSLAND
After Victoria announced its school phone ban from 2020, Queensland Education Minister Grace Grace said the decision whether or not to ban devices was up to individual principals.

That’s despite Federal Education Minister Dan Tehan calling for a national ban before he met with the state education ministers to discuss the topic in June.

“I would encourage Queensland to follow suit,” Mr Tehan said before the meeting.

“I know this is under consideration in Queensland. Now Victoria has moved, my hope is we will see other states and territories follow. It would be wonderful if Queensland followed.”

Dr Michael Carr-Gregg has been actively pushing for the bans and said in June that Queensland must follow the other states.

“I would advise the Queensland Education Minister to study the program in place at Lourdes Hill Independent Catholic School in Brisbane (Qld), where a ban has been working very successfully,” he said.

“As well as boosting mental health, there is proof that students interact more, they run around more in breaks, they do better in their learning and focus is improved. What’s not to like?”

The child expert admits that there is an adjustment period for the kids, but when habits are broken it works well.

“The students won’t like the idea, that is to be expected, but they settle down.”

Dr Carr-Gregg has also urged all states to develop a “digital licence” test, similar to the old-fashioned pen licence.

He said the Queensland Government should make the tests free and compulsory.

Mobile phones are a distraction, threaten discipline in the classroom: Tehan

Australia-first review into phones at school

CLASSROOM ACTIVITIES
1. Positives vs negatives
Not everyone feels the same way about banning phones and other devices in schools. Divide a page into a grid with six sections: two columns across and three rows down the page. Write POSITIVES at the top of one column and NEGATIVES at the top of the other. Now write labels down the side of your page so there is a row for each of STUDENTS, TEACHERS and PARENTS.

2. Extension
Write a paragraph giving your opinion on whether banning devices such as mobile phones from schools is a good idea, based on the information in your grid. When forming your opinion, try to take into account the positives and negatives of a ban from the point of view of all groups: students, teachers and parents.

HAVE YOUR SAY: Do you think phones and other devices should be banned at your school?
No one-word answers. Use full sentences to explain your thinking. No comments will be published until approved by editors.