Talita and Casey in a bath filled with tap water from the Darling River on January 17, 2019 in Louth, NSW. Families in drought regions have been battling water shortages for several years. Picture: Getty Images

Several NSW towns will run out of drinking water by November if the drought continues.

Without significant rain, Dubbo, Cobar, Nyngan and Narromine will be the first NSW towns to run dry this spring, according to water authority WaterNSW.

But even beyond current drought regions, Australia is facing a longer-term water storage problem, with more dams needed to match population growth.

Total water storage capacity* per person has fallen by 25 per cent since 2000 as the nation’s population has grown from 19 million to 25 million.

Official “Day Zero” projections* obtained by The Sunday Telegraph reveal the dates when crucial rivers and dams that supply drinking water for NSW are expected to run dry unless there is significant rainfall.

More than 170,000 rural residents in NSW towns could run out of all river and dam water between November this year and March 2021, and would rely on underground water from bores, or emergency supplies of bottled and trucked-in water. 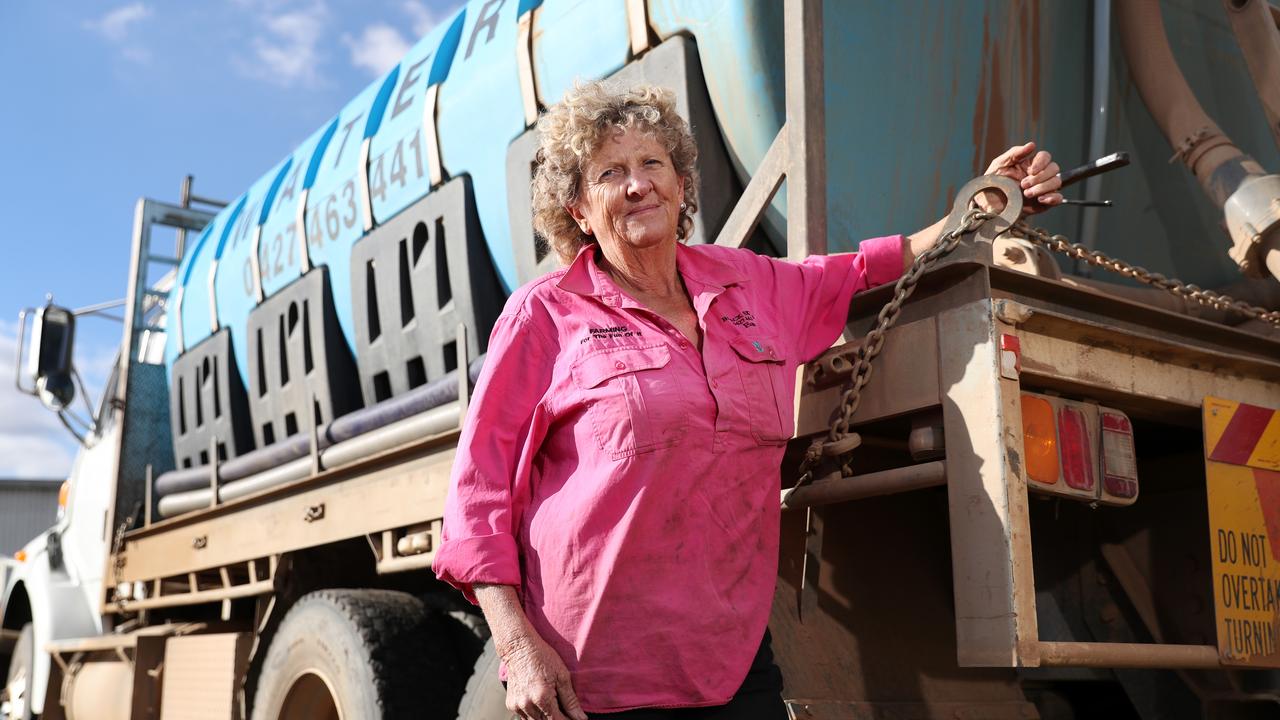 Farmer and water carter Fiona Adams delivering water to Neil Cosier’s farm in Curra Creak, in central west NSW in July this year. The Cosiers have had to buy water to drink for the past three years. Picture: Jonathan Ng

In the worst-case scenario, assuming long-range rainfall forecasts are correct and there is no significant rain on the horizon, parts of Sydney would run dry in October 2021 and the city would be completely dry by January 2022, without the desalination plant.

The amount of water in the past year that has flown into Warragamba Dam, which holds 80 per cent of Sydney’s water, is less than 10 per cent of the long-term average. The situation is similarly urgent in parts of southern Queensland.

Stanthorpe, for instance, is expected to run out of water by December without rain.

Queensland Premier Annastacia Palaszczuk visited the town in recent days in the wake of the recent bushfires.

While at Stanthorpe, the Premier announced that 30-40 trucks will cart water to the town every day at a cost of $800,000 a month to provide drinking water.

Counting down to "day zero": Rural towns in water crisis

MORE DAMS NEEDED FOR THE FUTURE
Long term, more dams need to be built for water storage capacity to keep up with Australia’s population growth.

Australia’s water storage is 25 per cent less water per person now than 20 years ago.

Only 20 dams have been built nationally in the past 15 years and, of these, 16 were in Tasmania, the least populous* state.

Just one project, the Chaffey Dam upgrade, was completed in NSW during that time, with one dam built in the ACT and two in Queensland. Noah Springall is collecting a truck full of water to deliver to Stanthorpe, Qld. The Qld Government has also promised to help by trucking in drinking water.

Two major dams planned to supply Sydney and the Hunter Region in NSW — Welcome Reef and Tillegra — have been scrapped by the NSW state government since 2002.

In Sydney, water storage capacity per person has dropped from 0.62 megalitres* in 2000, to 0.48 megalitres this year and will drop a further 20 per cent by 2030 without action.

“If these states don’t start building dams, their water storage capacity will fall by up to 37 per cent by 2030,” Mr Littleproud said.

“Building dams will make sure we still have clean drinking water in regional towns and bring down the price of water to produce food.”

Mr Littleproud said the severity* of the drought had exposed communities and the agriculture industry to state and territory inaction*.

“The states have been responsible for urban water since Federation and should be taking the lead,” he said.

“I want to see bulldozers digging holes for new water storage as soon as possible.” The NSW state government is yet to make a significant dent in its $4.2 billion Snowy Hydro Legacy Fund — money specifically designed for major water infrastructure projects across the state.

NSW Deputy Premier John Barilaro blamed long and complicated approvals processes for stopping the construction of more dams and he is preparing a proposal to shorten environmental approval processes to fast-track dams.

“For too long we have accepted advice from bureaucrats* who tell us we can’t build a dam because the economic or environmental costs are too great,” he said.

“It is a gross fact that it would take less time to build a dam than do the paperwork. That has to change.”

The Daily Telegraph asked NSW Environment Minister Matt Kean if there was scope* to fast-track approvals for dams, but he did not respond.

A NSW government spokesman said more than $800 million had been spent on water projects since 2017.

“We will continue to appropriately assess and invest in projects to ensure our communities have the vital infrastructure needed to support sustainable water supply,” he said. 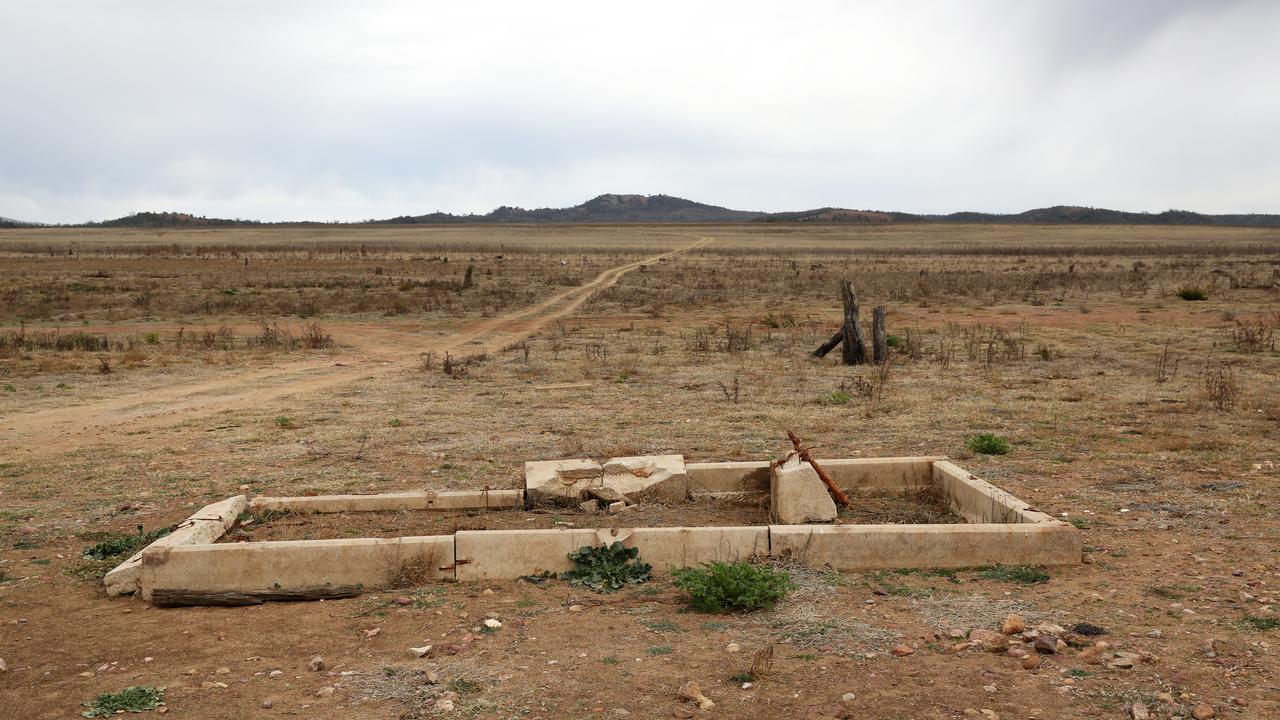 Keepit Dam in the North West slopes region of NSW is currently at 1 per cent capacity, which means historic gravesites have become visible. The dam supplies irrigation and household water to the Namoi Valley. Picture: Jonathan Ng

CLASSROOM ACTIVITIES
1. A dry city
One of the many alarming facts from the Kids News article is that the city of Sydney could be completely without water by 2022. Working with a partner, divide a page into four boxes and fill in the boxes with the categories below, outlining the impacts of a dry city of 4.6 million people.

2. Extension
Work with a partner and come up with some possible solutions to the water crisis facing parts of Australia. In your solutions, outline what needs to be done, and by whom, for this solution to work.

HAVE YOUR SAY: Is water in short supply where you live? Have you ever experienced water restrictions?
No one-word answers. Use full sentences to explain your thinking. No comments will be published until approved by editors.