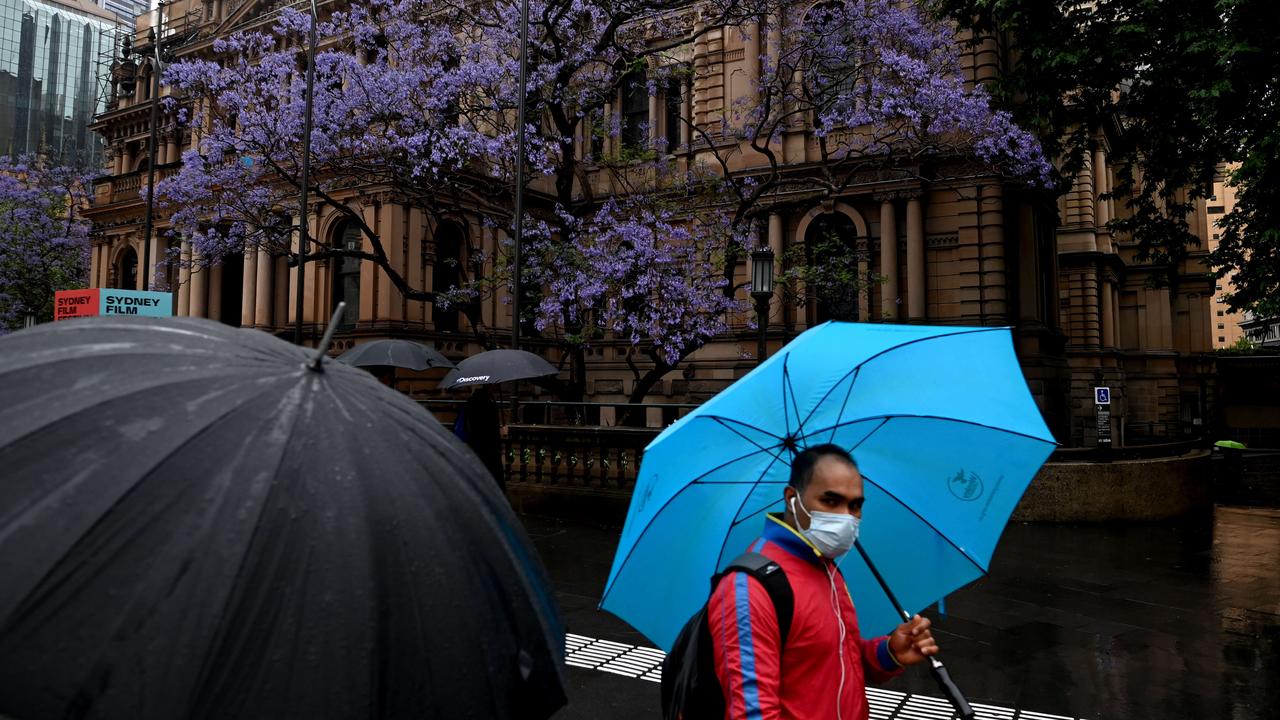 Sydney (pictured) and the other eastern capitals can expect the wet, cooler weather to continue as a La Niña summer is confirmed. Picture: Jeremy Piper

Australians can expect a stormy, cool and wetter than usual summer with a La Niña weather event officially confirmed.

The Bureau of Meteorology* on Tuesday declared a La Niña was underway in the tropical* Pacific after weeks of anticipation.

Last summer was also affected by the climate driver, meaning back to back La Niñas for Australia.

The weather bureau issued a La Niña “watch” on September 14, which it ramped up to a La Niña “alert” on October 12.

Much of eastern Australia has been lashed over the past two months by heavy rain and thunderstorms, which last week flooded the Lachlan River catchment* in the NSW Central West. Time to smash some puddles! Cheyse Hoy, 6, and Mack Acheson, 4, made the most of the recent Lachlan River flood at the Forbes Iron Bridge. Picture: Jonathan Ng

The La Niña weather phenomenon*, linked to the shifting pattern of sea surface temperatures through the Pacific and Indian Oceans, affects rainfall and temperature variations in Australia.

Typically it is associated with heavier rainfall for eastern, northern and central parts of the country, as well as a higher likelihood of tropical cyclones.

Eastern Australia has been hit by heavy rainfall and wild thunderstorms in October and November.

Tropical Cyclone Paddy, the first of the 2021-2022 season, formed near Christmas Island on Monday but the weather bureau said it doesn’t pose an immediate threat to the mainland or any offshore communities.

The category one system will continue to move slowly south before moving west and starting to weaken later on Tuesday.

During La Niña, waters in the central or eastern tropical Pacific become cooler than normal, persistent southeast to north-westerly winds strengthen in the tropical and equatorial* Pacific, and clouds shift to the west, closer to Australia. After a wet, windy and cold spring, summer looks set to deliver more of same along the eastern seaboard of Australia. Picture: Damian Shaw

“La Niña also occurred during spring and summer of 2020-21. Back-to-back La Niña events are not unusual, with around half of all past events returning for a second year,” he said.

Dr Watkins said that this year’s La Niña was not predicted to be as strong as the 2010-12 event and may even be weaker than the one that occurred last summer.

“Every La Niña has different impacts, as it is not the only climate driver to affect Australia at any one time,” he said.

“That’s why it is important not to look at it in isolation and use the bureau’s climate outlook tools online to get a sense about likely conditions for the months ahead.”

The weather bureau said this La Niña event is likely to persist until at least the end of January 2022.

CLASSROOM ACTIVITIES
1. Write a story
Do you think that it is better to have a La Niña summer? List the benefits and disadvantages of having our weather affected by La Niña over the summer. Next to each item on your list, write a sentence that explains your idea.

2. Extension
Create a resource for younger kids that helps them to understand what La Niña is. There is only one rule: you are not allowed to use any words.