Eloise Bekker, 2, and sister Felicity, 4, didn’t let the rain spoil their outing in the Sydney suburb of Bondi back in February when the La Nina weather driver brought drenching rain to much of Australia. Picture: Julian Andrews

The La Nina climate driver*, which has been the key factor behind much of Australia’s weather woes over the past two years, has finally ended.

But the Bureau of Meteorology has warned the troublesome system has a sting left in its tail.

Not only could it remain wetter than average despite La Nina’s absence, but there are strong indications that it will be back in a few months, bringing more drenching rain.

If La Nina does bubble up again in spring, it will be the third year in a row it’s made an appearance. That is very rare.

“Back-to-back La Ninas are not uncommon,” said the Bureau of Meteorology’s head of long-range forecasting, Dr Andrew Watkins. “In fact we get them about half the time since 1900.

“But a three-year La Nina is less common and we’ve only seen that three times since the middle of the last century.”

On Tuesday, the bureau confirmed the 2021-22 La Nina had finally dissipated*, months after it was due to weaken. The atmospheric* phenomenon* caused chaos on the east coast of Australia. Flooding in northern NSW and southeast Queensland caused at least $4.3 billion in damage, figures by the Insurance Council show. But the actual figure might be much higher.

How does La Nina work?
La Nina is one extreme of the climate driver known as the El Nino – Southern Oscillation, or ENSO.

During a La Nina phase, cool waters from the depths of the Pacific Ocean are hauled up to the surface in the central and eastern equatorial region*.

Stronger winds from east to west then push warmer seas closer to Australia. That aids in the creation of more clouds and moisture, and windier conditions for the continent.

During an El Nino phase that moisture heads towards the Americas, leaving Australia drier.

According to the bureau’s definition, the ENSO has just entered a neutral phase – so neither La Nina or El Nino. That’s likely to persist throughout winter. A boat was the easiest way to get around when the floods came to Camden in NSW in March 2022. Picture: Monique Harmer

However, Australia remains on La Nina “watch”, meaning it won’t take much for the system to kick back in again.

“A La Nina watch does not change the outlook of above average rainfall for most of Australia over coming months,” Dr Watkins said.

A negative IOD can bring more moisture Australia’s way during the colder months. 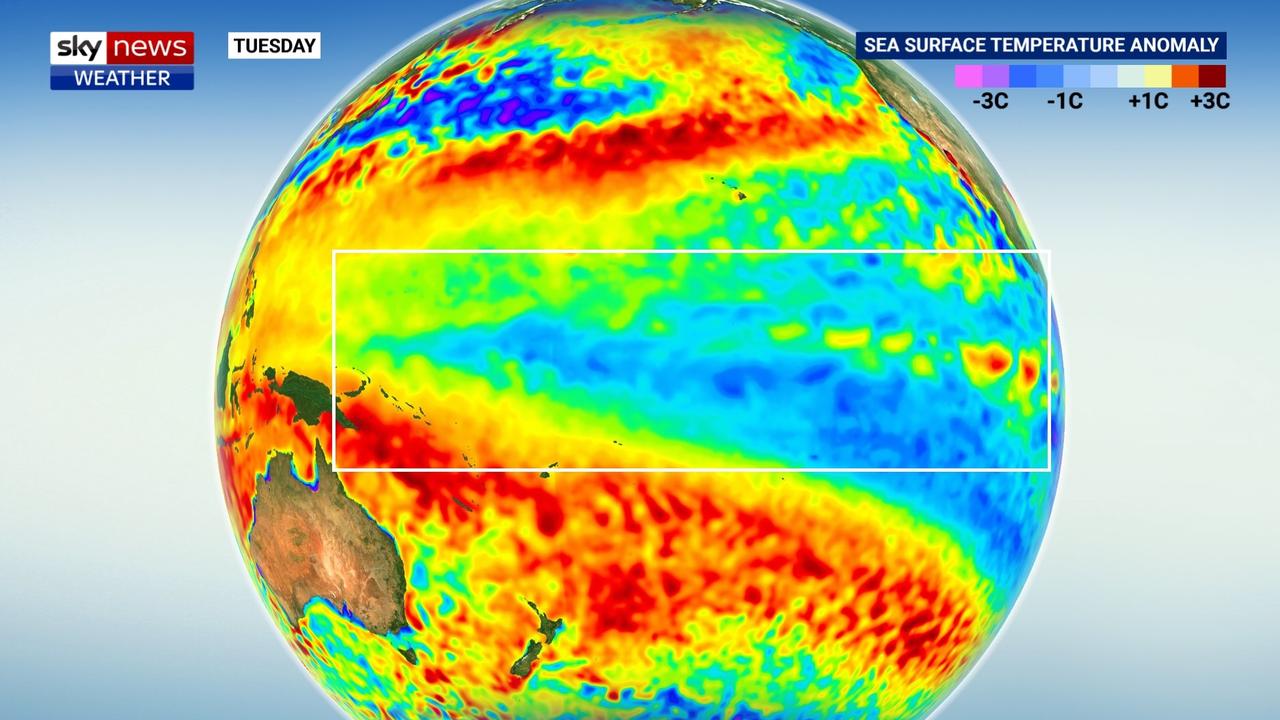 The US National Weather Service has also forecast a triple La Nina.

Earlier this month, it said there was an almost 60 per cent chance of a strengthening La Nina in late 2022.

That should lead to less rain for the US, particularly in the west, increasing the chance of heatwaves and bushfires.

But for Australia, if La Nina III does come to pass, we can expect more rain and even more flooding, just like we have had for the past two years.

Rain could last until August

School’s out as Qld floods cause havoc

CLASSROOM ACTIVITIES
1. Farewell La Nina
Design a special farewell card for La Nina. You must include a short poem or words about La Nina inside the card

2. Extension
Create a page in a textbook for other kids that will help them to understand how the La Nina weather pattern works. The only rule: you are not allowed to use any words.

VCOP ACTIVITY
La Nina wants to be heard
Imagine if La Nina was more than a weather system, more like an earth spirit or god, a bit like Te Fiti in Moana.

Why is La Nina so angry and causing so much weather chaos? How can we fix it?

Write a short story about a quest to right a wrong and make La Nina happy again.

You can choose to be the main character in the story or someone else.

Remember to outline the problem and then the quest is to create the solution.

Use your VCOP skills to grab the audience’s attention.